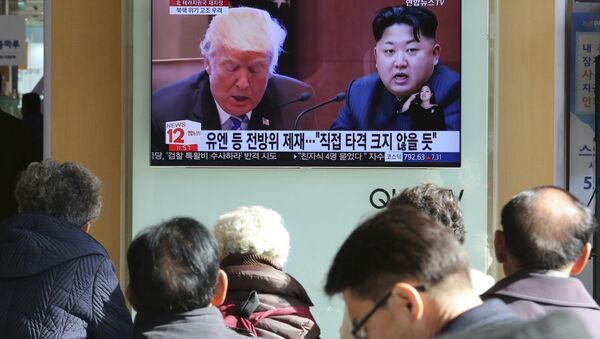 US President Donald Trump has tweeted that a deal with his North Korean counterpart Kim Jong-un is “very much in the making.” This comes after Trump agreed to a proposed meeting with Kim Jong-un. Radio Sputnik spoke with Professor Jaechun Kim from Songang University about the significance of such a meeting.

Sputnik: How likely is the meeting between Trump and Kim Jong-un to go ahead?

Jaechun Kim: I think it is highly likely for the two leaders to meet, but I think Washington will be imposing conditions and that’s going to be that North Korea will have to take certain steps to show goodwill, to show that denuclearization is really sincere.

So, I think Washington DC will be asking Pyongyang to take certain steps in terms of de-nuclearizing themselves by taking certain steps.

Sputnik: This is the very first time that a sitting US president will be meeting with a North Korean leader. Can you talk about the significance of that?

Jaechun Kim: Well, as you just mentioned this is going to be first event for the leaders of both countries to meet, so it’s going to be a very significant event for sure. I think that it is intention of North Korean leader to arrange this meeting to show to the world that North Korea is a normal country. It’s not really a rogue state as many would have believed.

READ MORE: Here is What You May Expect From Trump-Kim Jong-un Meeting

Sputnik: North Korea it seems, has agreed to hold its testing program prior to negotiations and as negotiations continue. Now holding a testing program is very different than reducing the amount of weapons they currently have in their arsenal. Do you think there is any chance that, and if so, what will be North Korea’s conditions to move toward the denuclearization?

Jaechun Kim: I think there condition would be withdrawal of United States forces in North Korea. They said they would have no reason to retain nuclear weapons if there is a guarantee coming from the US and South Korea that their regime is going to be. The regime [survival] is guaranteed, then that really means that in the short run US and South Korea will have to halt joint military exercises and withdraw American strategic, military assets from the Korean Peninsula […].

So that is their condition, you know, denuclearization is possible but there is got to be a condition. Condition is you have got to guarantee our regime survival, by which they mean to eventually dismantling of Korean, US alliance partnership.