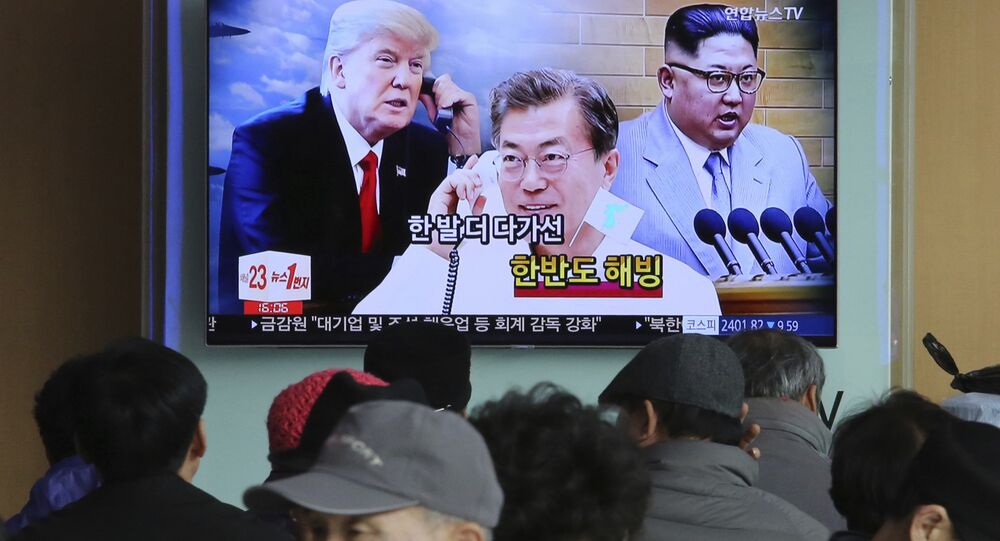 In a major turn of events, US President Donald Trump and North Korean leader Kim Jong-un will meet in person after Kim told a South Korean envoy he was committed to denuclearization and will hold off on future nuclear weapons' tests.

Addressing reporters Thursday outside the White House, South Korean National Security Adviser Chung Eui-yong announced that Kim is willing to meet Trump "as soon as possible." Trump replied to Kim's invitation by expressing his willingness to meet by May.

"North Korea will refrain from any further nuclear or missile tests," Chung said. "I told President Trump that at our meeting [in Pyongyang] North Korean leader Kim Jong-un said he's committed to denuclearization."

Chung led a group of South Korean officials to Pyongyang earlier this week for historic meetings, including a dinner with Kim Jong-un. At the meeting, the South Koreans hand-delivered a note from South Korean President Moon Jae-in. "The South and the North agreed to hold the third summit at … the Panmunjom in late April," Chung said on March 6. Kim and Moon are to meet at that summit.

Chung's group then traveled to Washington on Thursday, where they hand-presented Trump with a letter from Kim.

"President Trump appreciated the briefing, and said he would meet Kim Jong-un by May to achieve permanent denuclearization," the official continued. Chung credited Trump's "maximum pressure policy" in reaching this historic accord: the Trump-Kim meeting will mark the first time the two nations's leaders have ever met, or indeed spoken at all.

​Further, Kim expressed that he understands that the US and its allies must continue military exercises around the Korean Peninsula.

It is not clear where the meeting will take place, but the announcement marks a drastic shift from the nuclear brinksmanship that Trump and Kim engaged in last year, with North Korea conducting a record number of ballistic missiles tests and achieving advances in ICBM technology that would allow Kim to credibly order a nuclear strike on the United States mainland.

Trump's typical approach has been to attack Kim as a “madman who doesn’t mind starving or killing his own people,” even calling him "Little Rocket Man." This makes the agreement to meet and for the Korean Peninsula to denuclearize all the more dramatic.

​Last May, though, Trump announced he would be "honored" to meet the North Korean leader. He has toyed with the idea on his Twitter account as well.

​For its part, Beijing has consistently voiced support for Washington and Pyongyang to engage in productive dialogue.​

Great meeting with @Cabinet at the @WhiteHouse today! #MAGA pic.twitter.com/InWj0QTosz