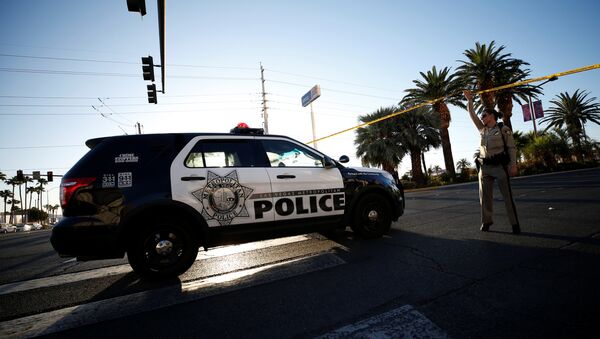 © REUTERS / Chris Wattie
Subscribe
Although the Las Vegas tragedy has reignited the gun control debate it won't result in any changes in US legislation despite a series of similar episodes, American professor and author Timothy Lytton told Radio Sputnik, adding that the gunman had no obstacles in his way to bring weapons to his hotel room, unpack them and commit the crime.

"We are unlikely to see any type of federal initiative or any type of change in federal regulation as a result of [the Las Vegas shooting]," Timothy Lytton, distinguished professor at Georgia State University College of Law and author of the book "Suing the Gun Industry" told Radio Sputnik, commenting on the mass shooting in Las Vegas which has so far claimed the lives of 59 and left 527 injured.

"Certainly in the legislature there will not be any bills… coming along to either restrict or liberalize gun control," he added.

The academic noted that what is likely to happen is that "each side [in the US Congress] will just get more set in their opinion."

Lytton has drawn attention to a very peculiar American phenomenon: "Gun control and issues of gun violence in the US are somewhat different from other types of policy issues," he said.

He noted that people's attitude to this or that matter often change "when there is a large tragedy or an outbreak of some sort of natural disaster." This usually works when it comes to food regulation issues and "this is true in terms of disaster relief and public spending."

"The one area where this is not true seems to be gun violence," the academic underscored. "It seems to me that no matter how large the tragedy is… these types of large events I think shock people but at the same time they tend to instead of changing people's views or shaking up their views, reinforce their views so what we get in the United States is a fairly predictable reaction both from the people who support gun rights and the people who support gun control."

Las Vegas Killer's Family Had History of Violence, Mental Disorders
Furthermore, in states where people favor gun rights the "general reaction to these sorts of massacres is that there is liberalization of people's ability to carry firearms," Lytton pointed out. They justify it by what they view as a lack of safety.

The academic also recalled that "many states, including Nevada, where Las Vegas is located have what's called concealed carry laws."

He explained that "if there is a jurisdiction that allows people to carry weapons concealed" that means they are allowed to bring them in a hidden manner to a public place, for instance, a hotel.

At the same time, the academic continued, hotels do not routinely screen baggage for people coming in: "That would be unusual in fact in the US for a hotel to screen or X-ray or do some sort of check" on anyone's baggage.

However, the right to bring arms in one's luggage to a public place enabled the Las Vegas shooter, a 64-year-old local resident Stephen Paddock, to commit his crime. Citing media reports, Lytton pointed out that the culprit took his guns to a room on the 32nd floor of the Mandalay Bay Resort hotel in "ten different suitcases over time."

US Physicians Call For Ban on ‘Military-Style’ Weapons After Las Vegas Massacre
To complicate matters further, "there is for the most part no limit on the number of firearms that an individual can purchase in the United States," the academic stressed, adding that Paddock had about 20 guns in his hotel room and more than 20 in his home.

On October 1, the gunman opened fire on a crowd of more than 22,000 concert-goers from his room at the Mandalay Bay Resort hotel. It is known that Paddock was living in his own home in a retirement community about 130 km northeast of Las Vegas.

Being a licensed hunter, he owned at least 42 guns which were found following the massacre in his hotel room and at his house in addition to explosives and several thousand rounds of ammo. It was also reported that the shooter had a family history of gun violence and mental disorders.

According to the FBI, Paddock had no connection with the Daesh (ISIS/ISIL) terrorist group. Earlier, the terrorist organization had claimed responsibility for the crime.

The Las Vegas shooting has become the worst in US history and was described by President Donald Trump as "an act of pure evil."

In December, 2015 the deadly shooting at a San Bernardino County Department of Public Health claimed the lives of 14 people and left 22 injured. The crime was committed by Syed Farook, a US citizen of Pakistani descent, and Tashfeen Malik. Reportedly, before the crime Farook pledged alliance to Daesh.

000000
Popular comments
Both the Congress and the Senate are useless, overpaid children playing games and are corrupt. I think thats the main reason. Trump said that it was a pure act of evil, so that will keep them busy for a while trying to discredit him.
Rokenbok
3 October 2017, 21:50 GMT2
000000
No surprise at all! The United States corporate government will always put profits before the welfare of people. The United States is a shining example of Capitalism gone insane a nation of predators and delusional sociopaths, who cling to the big lie of the "American Dream" and "Exceptionalism" .
hopscotch64
3 October 2017, 22:45 GMT2
000000
Newsfeed
0
New firstOld first
loader
LIVE
Заголовок открываемого материала
Access to the chat has been blocked for violating the rules . You will be able to participate again through:∞. If you do not agree with the blocking, please use the feedback form
The discussion is closed. You can participate in the discussion within 24 hours after the publication of the article.
To participate in the discussion
log in or register
loader
Chats
Заголовок открываемого материала
Worldwide
InternationalEnglishEnglishMundoEspañolSpanish
Europe
DeutschlandDeutschGermanFranceFrançaisFrenchΕλλάδαΕλληνικάGreekItaliaItalianoItalianČeská republikaČeštinaCzechPolskaPolskiPolishСрбиjаСрпскиSerbianLatvijaLatviešuLatvianLietuvaLietuviųLithuanianMoldovaMoldoveneascăMoldavianБеларусьБеларускiBelarusian
Transcaucasia
ԱրմենիաՀայերենArmenianАҧсныАҧсышәалаAbkhazХуссар ИрыстонИронауОssetianსაქართველოქართულიGeorgianAzərbaycanАzərbaycancaAzerbaijani
Middle East
Sputnik عربيArabicArabicTürkiyeTürkçeTurkishSputnik ایرانPersianPersianSputnik افغانستانDariDari
Central Asia
ҚазақстанҚазақ тіліKazakhКыргызстанКыргызчаKyrgyzOʻzbekistonЎзбекчаUzbekТоҷикистонТоҷикӣTajik
East & Southeast Asia
Việt NamTiếng ViệtVietnamese日本日本語Japanese俄罗斯卫星通讯社中文（简体）Chinese (simplified)俄罗斯卫星通讯社中文（繁体）Chinese (traditional)
South America
BrasilPortuguêsPortuguese
NewsfeedBreaking
16:52 GMTUS National Whelan Tells Family About Physical Assault in Russian Prison
16:37 GMTDems Reportedly Mulling Ploy to Defuse Debt Ceiling Stand-off with GOP to Avert Gov't Shutdown
16:30 GMTHeart-Stopping Moment: Divers in Brazil Come Face-To-Face With Giant Anaconda
16:23 GMTEU Greens Co-leader Threatens to Turn Nord Stream 2 Into ‘Investment Ruin’
16:22 GMTUK's New Foreign Secretary Heads to US on First Foreign Visit
15:58 GMTHindu Man Thrashed by Thugs for Travelling With Muslim Woman in India's Bengaluru - Video
15:53 GMTRonaldo Supports Coma-Stricken Player: 'Get Well Soon My Friend'
15:29 GMTBoxer Manny Pacquiao to Run for Philippine President in 2022 Election
15:16 GMTCharanjit Singh Channi to be Next Chief of Punjab, Says India's Congress Party
15:04 GMTIran’s President Hails Entry Into China, Russia-led Economic & Security Pact as ‘Diplomatic Success’
14:59 GMTStreaming Giant Netflix Tipped to Score Big Time at Live 2021 Primetime Emmy Awards
14:20 GMTSpanish Canary Island of La Palma Rocked by Volcanic Eruption - Videos
14:12 GMTFrance Denies Cancelling Summit With Swiss President Over Jet Ordering Debacle
13:41 GMTTwo Libyan Helicopters of Haftar's LNA Collide at Drills Near Benghazi, 2 Killed,Source Says
13:40 GMT'Two Steps Forward': Pele's Daughter Shares Details on Iconic Player's Condition After Surgery
13:35 GMTSafety First! US Reportedly Frees Daesh Fighters From Prison in Syria, Jabs Them With Covid Vaccines
13:31 GMTDonald Trump's Hollywood Walk of Fame Star 'Gets Smeared in Dog Poop'
13:00 GMTNot Toys, But Collector's Items: Bavarian Business Rolls Out 'Merkel Teddy Bear'
12:46 GMTTehran Threatens to Expand Strikes Against Terrorists in Northern Iraq, Demands Closure of US Base
12:43 GMTIsraeli US Envoy Slams Ocasio-Cortez for Bid to Block Sale of Precision-Guided Munitions to Tel Aviv