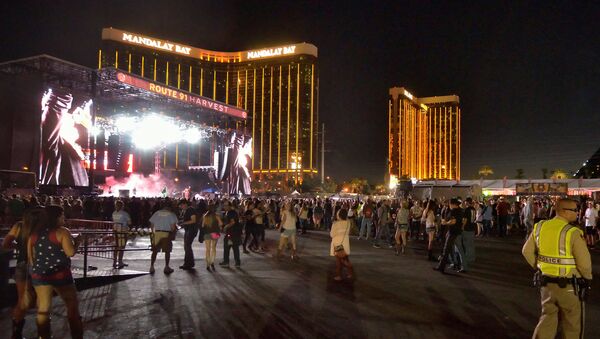 © REUTERS / Courtesy of Bill Hughes/Las Vegas News Bureau/File photo
Subscribe
Stephen Paddock, the Las Vegas Strip shooter gunman behind the deadliest mass shooting in US history, had a family history of gun violence. His father, Bejamin Hoskins Paddock, was a part-time bank robber and swindler with a history of running afoul of the law.

The toll from Stephen Paddock's deadly Sunday rampage now stands at 59 dead and 527 injured, with fatalities continuing to climb. As Americans come out of their state of shock over the brutality and scale of the massacre, journalists are asking questions about the shooter, his backstory, and what prompted him to commit the heinous act.

Up Yours! Man Flips the Bird to Las Vegas Shooter Amid the Carnage (VIDEO)
So far, it is known that Paddock was a 64-year-old retired accountant living in his own home in a retirement community about 130 km northeast of Las Vegas. An affluent, twice-divorced man, Paddock was a licensed pilot and owned two small pleasure aircraft. He owned several rental properties, and enjoyed gambling, concerts and cruises. A licensed hunter, the would-be killer reportedly owned at least 42 guns, nearly a dozen of which were found in his hotel room following the massacre, with another 19 found at his property, in addition to explosives and several thousand rounds of ammo.

Paddock's backstory doesn't help to explain what drove him to commit the heinous act. Nor does it help that Paddock made no effort to make his motives clear before taking dozens of lives and committing suicide on the night of the shooting.

Crime Runs in the Family

One intriguing detail emerging from Paddock's biography is the story of his father, Benjamin Hoskins Paddock, a WWII veteran, salesman and repairman in Tucson, Arizona who turned to robbing banks.

A clipping from the October 6, 1960 issue of the Arizona Republic newspaper reported that Paddock, a three-time bank robber, had been indicted along with a co-conspirator on three counts of robbing Phoenix, Arizona branches of the Valley National Bank between 1959 and 1960, stealing $25,000 in cash over the course of the three forays. After being arrested in Las Vegas following his last caper, Paddock was convicted in 1961 and sentenced to 20 years in a West Texas federal prison. According to other articles from the same period, Paddock was arrested following a dramatic confrontation with FBI agents in which he attempted to run one of them down with his car. The agents responded by riddling his windshield with bullets. 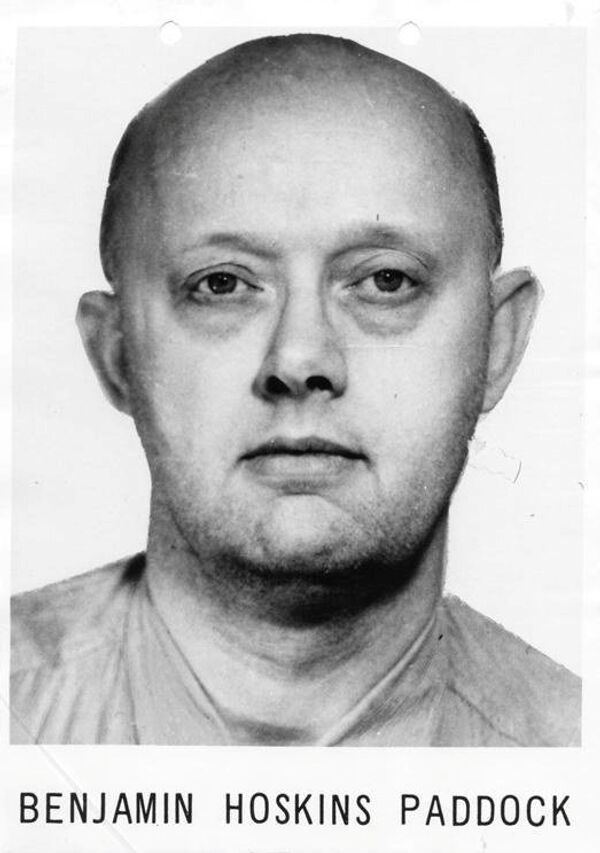 Stephen Paddock, the would-be mass killer, was seven years old when his father was first arrested.

In 1968, Benjamin Paddock escaped confinement and fled to San Francisco, where he was accused of robbing another bank, and then headed up the US West Coast, settling in Oregon and changing his name to Bruce Werner Ericksen. Between 1969 and 1977, Paddock's name was on the FBI's Top Ten Most Wanted Fugitives list. Said to have been a diagnosed psychopath, Paddock's record also included automobile larceny and fraud.

An FBI poster from the time warned that Paddock had "suicidal tendencies and should be considered armed and very dangerous."

Mandalay Bay Heroes: They Gambled With Their Lives to Rescue Others in Las Vegas
Federal agents caught up with Paddock's father on the night of September 6, 1979 in Springfield, Oregon, where he had become the manager of a bingo center, gaining a local reputation as "Bingo Bruce." Two more years were added to his prison sentence, but he was paroled less than a year later, according to an archived article from the Eugene Register-Guard, after receiving a petition signed by 1,600 Springfield residents pleading for his release. After his return home, he continued to run bingo parlors for several more years.

In 1987, Oregon's attorney general hit Paddock with seven racketeering and fraud charges, which he was able to settle for a fine of $623,000, allowing him to avoid jail time. Paddock moved to Arlington, Texas, spending the last decade of his life there, and dying in 1998 at age 71.

According to brother Eric Paddock, Stephen Paddock had no criminal history, and Sunday's massacre was a complete shock to him. At the same time, Eric confirmed that the brothers weren't exactly close to their father. Confirming that Benjamin Paddock was their father, Eric told media that their father was "rarely around."

000000
Popular comments
And so the point is?? Is it me or is Sputnik becoming more like msm attempting to divert attention away from the worst lone wolf killing spree in Americas history. They kept out the part of the killing off of the Indians and Custards fathers background. Of course genetics and upbringing play a major role In behaviour.
Rokenbok
3 October 2017, 17:49 GMT3
000000
Proof Las Vegas Shooting Was a FALSE FLAG Attack - Shooter on 4th Floor www.youtube.com/watch?v=4bPwXdUFCxE
yelloweye
3 October 2017, 18:52 GMT2
000000
Newsfeed
0
New firstOld first
loader
LIVE
Заголовок открываемого материала
Access to the chat has been blocked for violating the rules . You will be able to participate again through:∞. If you do not agree with the blocking, please use the feedback form
The discussion is closed. You can participate in the discussion within 24 hours after the publication of the article.
To participate in the discussion
log in or register
loader
Chats
Заголовок открываемого материала
Worldwide
InternationalEnglishEnglishMundoEspañolSpanish
Europe
DeutschlandDeutschGermanFranceFrançaisFrenchΕλλάδαΕλληνικάGreekItaliaItalianoItalianČeská republikaČeštinaCzechPolskaPolskiPolishСрбиjаСрпскиSerbianLatvijaLatviešuLatvianLietuvaLietuviųLithuanianMoldovaMoldoveneascăMoldavianБеларусьБеларускiBelarusian
Transcaucasia
ԱրմենիաՀայերենArmenianАҧсныАҧсышәалаAbkhazХуссар ИрыстонИронауОssetianსაქართველოქართულიGeorgianAzərbaycanАzərbaycancaAzerbaijani
Middle East
Sputnik عربيArabicArabicTürkiyeTürkçeTurkishSputnik ایرانPersianPersianSputnik افغانستانDariDari
Central Asia
ҚазақстанҚазақ тіліKazakhКыргызстанКыргызчаKyrgyzOʻzbekistonЎзбекчаUzbekТоҷикистонТоҷикӣTajik
East & Southeast Asia
Việt NamTiếng ViệtVietnamese日本日本語Japanese俄罗斯卫星通讯社中文（简体）Chinese (simplified)俄罗斯卫星通讯社中文（繁体）Chinese (traditional)
South America
BrasilPortuguêsPortuguese
NewsfeedBreaking
06:27 GMTEgypt Condemns Failed Coup Attempt in Sudan, Backs Transitional Government
06:26 GMTUK, US Agree to Keep Approach to Russia, China Based on 'Shared Values', Downing Street Says
06:18 GMTDanish PM Facing 'Minkgate' Probe Over COVID-19 Blanket Cull of Farmed Animals
06:10 GMTThe Bennett-Lapid Government's First 100 Days: What Promises Have They Broken?
05:52 GMTPowerful Earthquake in Australia Damages at Least 46 Buildings
05:42 GMTUK Reportedly Mulls Joining US-Mexico-Canada Trade Deal as FTA With America Stalls
05:24 GMTBrazilian Health Minister, Who Arrived at UN, Says Contracted COVID-19
04:30 GMTA Sigh That Tells It All: Golden Retriever Wants Attention
04:28 GMTLive Updates: Germany Registers 10,454 New COVID-19 Cases
04:11 GMTFlorida Gov. Orders All State Agencies to Search for Laundrie After Petito's Remains Confirmed
03:43 GMT'Nothing New on That': Bill Gates Brushes Off Question About His ‘Dinners’ With Epstein
03:33 GMTGOP Politicians Stand by US Border Patrol After Claims They 'Whipped' Refugees at Rio Grande River
03:14 GMTPele Cheers Up Fans by Posting Video of Him Riding Exercycle in Hospital
03:07 GMTAxis of Resistance Killed US, Israeli Commanders in Revenge for Soleimani's Assassination - Report
02:56 GMTPolitical Capital & GOP in His ’Grip’: Trump ’Wants Back’ in 2024, Journos Say
01:43 GMTIRGC Chief: Iran No Longer Sees US as Threat - Report
01:18 GMTChinese Covid Vaccines Reach 100 Nations, But WHO Warns Africa Still Short 470 Million Shots in 2021
01:04 GMTAwkward Moment as White House Staff Cuts Off Biden-Johnson Meeting in Mid-Sentence
00:20 GMTVideo: Military Jet Intercepts Small Aircraft Over NYC in the Middle of UN General Assembly
00:19 GMTPark Ranger ‘Implored’ Gabby Petito to Distance Herself From Toxic Relationship With Brian Laundrie