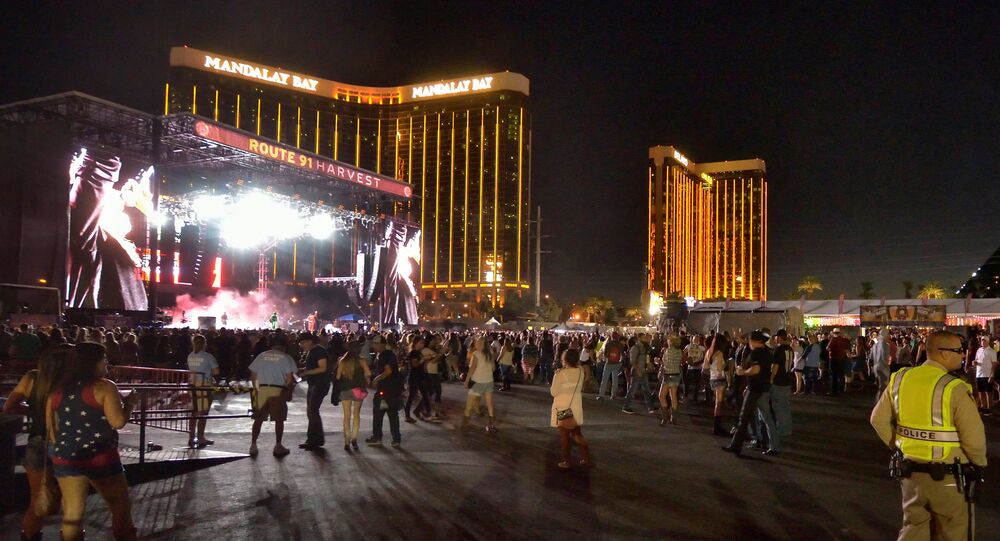 Stephen Paddock, the Las Vegas Strip shooter gunman behind the deadliest mass shooting in US history, had a family history of gun violence. His father, Bejamin Hoskins Paddock, was a part-time bank robber and swindler with a history of running afoul of the law.

The toll from Stephen Paddock's deadly Sunday rampage now stands at 59 dead and 527 injured, with fatalities continuing to climb. As Americans come out of their state of shock over the brutality and scale of the massacre, journalists are asking questions about the shooter, his backstory, and what prompted him to commit the heinous act.

© AFP 2020 / Mark RALSTON
Up Yours! Man Flips the Bird to Las Vegas Shooter Amid the Carnage (VIDEO)
So far, it is known that Paddock was a 64-year-old retired accountant living in his own home in a retirement community about 130 km northeast of Las Vegas. An affluent, twice-divorced man, Paddock was a licensed pilot and owned two small pleasure aircraft. He owned several rental properties, and enjoyed gambling, concerts and cruises. A licensed hunter, the would-be killer reportedly owned at least 42 guns, nearly a dozen of which were found in his hotel room following the massacre, with another 19 found at his property, in addition to explosives and several thousand rounds of ammo.

Paddock's backstory doesn't help to explain what drove him to commit the heinous act. Nor does it help that Paddock made no effort to make his motives clear before taking dozens of lives and committing suicide on the night of the shooting.

Crime Runs in the Family

One intriguing detail emerging from Paddock's biography is the story of his father, Benjamin Hoskins Paddock, a WWII veteran, salesman and repairman in Tucson, Arizona who turned to robbing banks.

A clipping from the October 6, 1960 issue of the Arizona Republic newspaper reported that Paddock, a three-time bank robber, had been indicted along with a co-conspirator on three counts of robbing Phoenix, Arizona branches of the Valley National Bank between 1959 and 1960, stealing $25,000 in cash over the course of the three forays. After being arrested in Las Vegas following his last caper, Paddock was convicted in 1961 and sentenced to 20 years in a West Texas federal prison. According to other articles from the same period, Paddock was arrested following a dramatic confrontation with FBI agents in which he attempted to run one of them down with his car. The agents responded by riddling his windshield with bullets.

Stephen Paddock, the would-be mass killer, was seven years old when his father was first arrested.

In 1968, Benjamin Paddock escaped confinement and fled to San Francisco, where he was accused of robbing another bank, and then headed up the US West Coast, settling in Oregon and changing his name to Bruce Werner Ericksen. Between 1969 and 1977, Paddock's name was on the FBI's Top Ten Most Wanted Fugitives list. Said to have been a diagnosed psychopath, Paddock's record also included automobile larceny and fraud.

An FBI poster from the time warned that Paddock had "suicidal tendencies and should be considered armed and very dangerous."

© REUTERS / Steve Marcus
Mandalay Bay Massacre Heroes: They Gambled With Their Lives to Rescue Others in Las Vegas
Federal agents caught up with Paddock's father on the night of September 6, 1979 in Springfield, Oregon, where he had become the manager of a bingo center, gaining a local reputation as "Bingo Bruce." Two more years were added to his prison sentence, but he was paroled less than a year later, according to an archived article from the Eugene Register-Guard, after receiving a petition signed by 1,600 Springfield residents pleading for his release. After his return home, he continued to run bingo parlors for several more years.

In 1987, Oregon's attorney general hit Paddock with seven racketeering and fraud charges, which he was able to settle for a fine of $623,000, allowing him to avoid jail time. Paddock moved to Arlington, Texas, spending the last decade of his life there, and dying in 1998 at age 71.

According to brother Eric Paddock, Stephen Paddock had no criminal history, and Sunday's massacre was a complete shock to him. At the same time, Eric confirmed that the brothers weren't exactly close to their father. Confirming that Benjamin Paddock was their father, Eric told media that their father was "rarely around."