Trump Card: US President 'Still Has Room for Maneuver' Despite Sanctions Bill 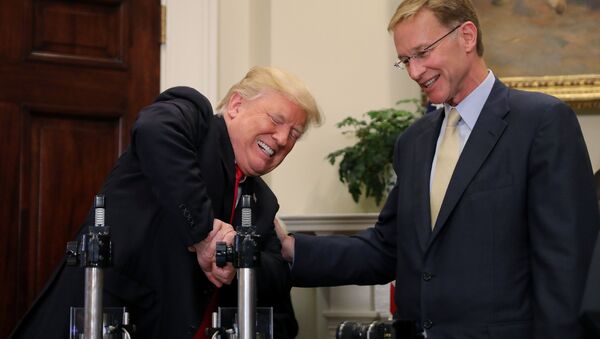 The US Congress is trying to exert more control over US President Donald Trump with its latest sanctions bill, but Trump still holds a great deal of room for maneuver in foreign policy, expert in US affairs Dr. Martin Thunert told Sputnik.

Iranian Leader Predicts US Isolation as Tehran Mulls Response to New Sanctions
After the US Congress voted last week to approve a bill imposing more sanctions against Russia, the Russian Foreign Ministry responded by suspending the use of all US Embassy warehouses and its compound in Moscow. On Sunday, Russian President Vladimir Putin said that the US diplomatic presence in Russia will be cut by 755 people.

The new set of punitive measures imposes sweeping sanctions on Russia and seeks, in particular, to target companies that invest in Russian energy projects.

Political scientist Dr. Martin Thunert, an expert in US affairs at the Heidelberg Center for American Studies (HCA), told Sputnik Deutschland that the new anti-Russian sanctions are intended as a "message" for President Trump and Moscow from Democrats and many Republicans who don't share the President's desire for better relations with Moscow.

"I think there are a lot of Democrats who believe the US intelligence services, that there really were attacks by Russian hackers. Many Democrats still believe that that cost Hillary Clinton the election so they wanted to send a signal to Russia and their own president. Some people from his [Trump's] own party also wanted this [sanctions bill], because in foreign policy issues – not just in trade issues but also in dealings with Russia – Trump deviated from the Republican orthodoxy of the last 15-20 years."

Anti-Russia Sanctions: Moscow Has a Lot to Respond With to the US 'Colt Culture'
The sanctions will now go to President Trump, who will sign or veto it. If Trump decides to veto it, the US Congress could override the veto if two-thirds of both houses back the bill. In the House of Representatives, the bill was passed by a majority of 419-3 and in the Senate by 98-2. The overwhelming majority means that Trump is likely to sign the bill rather than veto it, Thunert said.

"Theoretically, Trump has the possibility of exercising a veto. However, the majority is so great that he knows that it would probably be overturned by two-thirds in both houses. That is why I think he will sign the law. But he will try to get some more flexibility for himself and for the American companies that are working with Russia," Thunert said.

The restriction of Trump's room for maneuver with Russia will weaken Trump, but he still has a lot of room for negotiation in international affairs more generally, the analyst said.

"Trump still has a great deal of room for trade policy – he has succeeded in stopping TPP and parts of NAFTA are being renegotiated. He is still the commander-in-chief of the armed forces — this is certainly one of the biggest sources of power. It still can't be ruled out that Trump achieves the easing of sanctions if he accomplishes something in negotiations with Russia. The sanctions make it more difficult for him to govern, but they do not make him weak."

'Let's Cut Them Off From Space': How Russia Could Strike Back at US Sanctions
"I don't think that Trump is generally against turning the thumbscrews a bit and sanctioning some individuals. What really bothers him is the restriction of his room for maneuver, the flexibility he wants to have when he negotiates with President Putin or at the level of foreign and defense ministers."

Thunert said that German and European companies who are taking part in joint projects with Russian companies such as the Nord Stream 2 gas pipeline are justified in their fear of falling foul of US sanctions.

"The US is obviously of the opinion that its laws also apply extraterritorially and that the others should also adhere to them. They have risked a conflict before, and now they are risking it again."