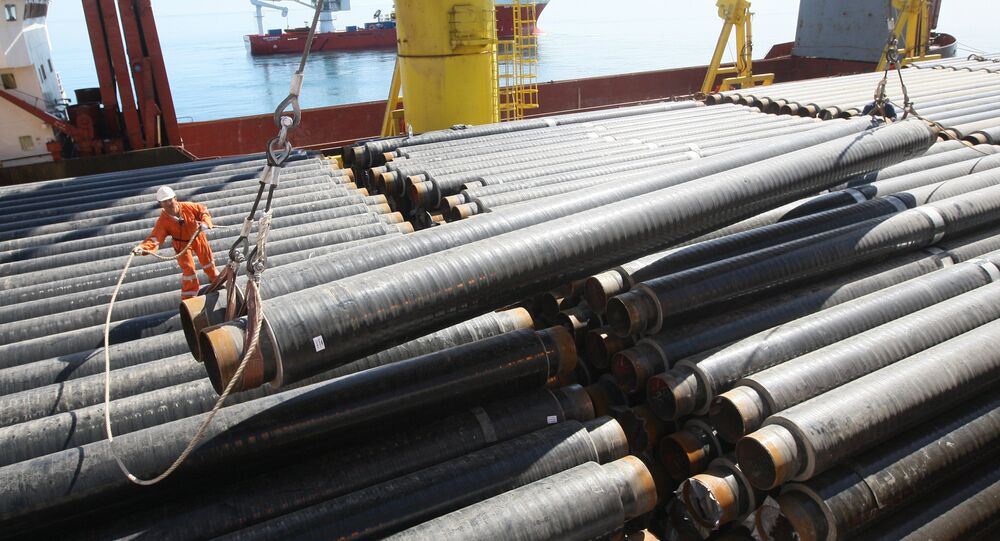 Gazprom has purchased a pipe-laying ship which would allow the company to build undersea pipelines despite sanctions. The new vessel may be used to build the Nord Stream-2 gas pipeline to Europe.

Russian gas-producing giant Gazprom has confirmed the purchase of the Jascon 18 pipe-laying ship. The new name of the vessel is Akademik Cherskiy.

"The company bought a pipe-laying ship for shelf operations. It is expected to be used in the Okhotsk Sea in the near future. The vessel can be used not only as a pipe-layer but also as a lift crane for heavy constructions," Gazprom Deputy Chairman Vitaly Markelov said.

The 150-meter-long Jascon 18 was ordered by Sea Trucks Group Limited (STG) in 2011. In May 2015, STG sold the ship to an unnamed buyer. Recently, Gazprom confirmed the deal.

Taking into account the fact that the construction of two runs of Nord Stream-2 has been estimated at €10 billion, the purchase of the new ship was not rational. However, the real purpose of the purchase was to minimize political risks for further pipeline projects, the article read.

According to Gazprom, the Akademik Cherskiy will be used at the Yuzhno-Kirinskoye gas field, in the Sea of Okhotsk. This oil field was included in US sanctions lists against Russia. The Yuzhno-Kirinskoye field is expected to be the resource base for the Power of Siberia-3 pipeline delivering gas to China.

© Sputnik / Igor Zarembo
Lavrov: US Attempts to Create Difficulties for Nord Stream 2 Construction Via NATO Friends
The new pipe-laying vessel would allow Gazprom to operate in the Yuzhno-Kirinskoye field despite Western sanctions.

Gazprom did not announce the use of the Akademik Chersky for the construction of Nord Stream-2, but it cannot be ruled out, the article read.

The two companies were also expected to build the undersea parts of South Stream. However, after the project was suspended Saipem filed a lawsuit against Gazprom. It was unofficially reported that Gazprom wanted to offer a new contract to Saipem to settle the lawsuit. Gazprom opened bidding for Nord Stream-2. The results of the tender will be announced later this year.

© Sputnik / Alexey Kudenko
Can TAP Pipeline Cut Europe's Reliance on Russian Gas?
However, now Gazprom is capable of building the Nord Stream-2 on its own. The new pipe-laying vessel will decrease company’s reliance on foreign partners and bypass US sanctions.

As for Nord Stream-2, despite the fact that the European Commission has repeatedly opposed the project there is no legal basis to ban it. The pipeline will not run across European territory thus it is not subject to the EU energy regulations.

As a result, risks are high that the US will try to stop the project by pressing foreign companies not to work with Gazprom. The Akademik Cherskiy may be Russia’s plan B in case of new US restrictive measures.