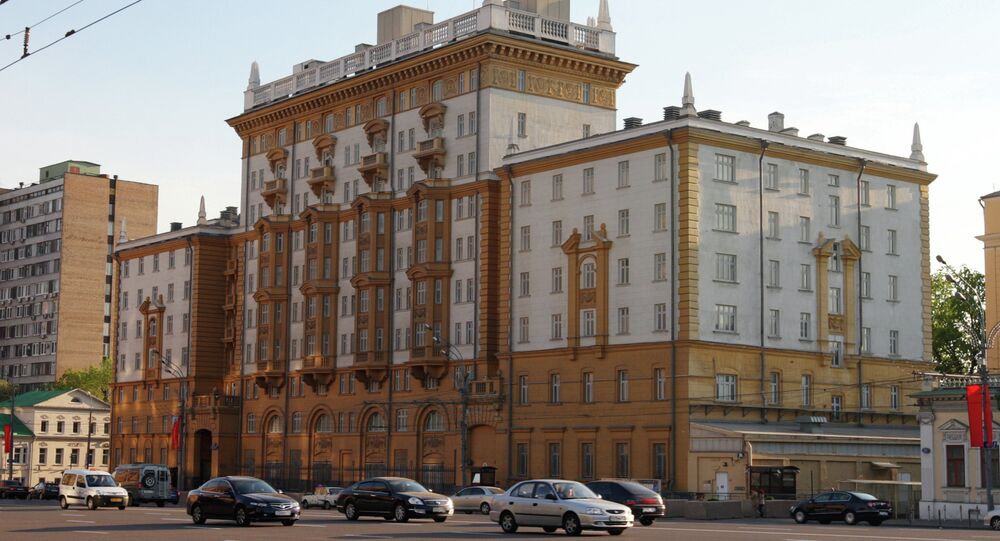 Russia Suspends US Embassy Use of Diplomatic Properties in Moscow

Russia is suspending the use of all warehouses in Moscow by the US embassy starting from August 1, the Russian Foreign Ministry said on Friday.

"The Russian side is suspending as of August 1 the use by the US embassy in Russia of all warehouses on the Dorozhnaya Street in Moscow and the dacha compound in Serebryanyy Bor," the ministry said in a statement.

The move comes following the US Senate's approval of a new set of sanctions against Russia, Iran and North Korea, which is yet to be signed by President Donald Trump. The bill limits Trump's ability to lift the restrictions on Moscow.

"We are offering to the US side to bring the numbers of US diplomatic and technical staff working in the US embassy in Moscow, in general consulates in St. Petersburg, Yekaterinburg and Vladivostok to reflect the exact number of Russian diplomats and technical staff who are in the United States. This means that the total number of employees in US diplomatic and consular agencies in Russia will be cut to 455," the ministry said in a statement.

Russia will give a "mirror response" should the United States introduce new unilateral measures to cut the numbers of Russian diplomats in the country.

Russia reserves the reciprocal right to respond to the latest sanctions bill passed in the US Senate by hitting US interests, the Russian Foreign Ministry said.

"We reserve the right in a manner of reciprocity to other measures that may affect the interests of the United States," the ministry said in a statement.

© Sputnik / Igor Mikhalev
Sidelined: Trump Has His 'Hands Tied' As 'Confrontation With Russia Gains Momentum'
In late 2016, the Obama administration slapped a new batch of sanctions on Russia and expelled 35 Russian diplomats on the pretext of Moscow's alleged meddling in the US presidential election.

Trump now has 10 days, excluding Sundays, to decide whether to sign the bill into law or veto the legislation, at which point the Congress could override his veto by a two-thirds majority.

The bill passed the House of Representatives on Tuesday by a vote of 419 to three.

"The new bill seeks to create unfair competitive advantages for the US in the global economy via political tools," the ministry said.

The bill has already prompted criticism within the European Union. France and Germany have so far spoken out against the bill that the US House passed overwhelmingly on Tuesday as one that adversely affects European industries while advancing US commercial interests.

Despite that, Moscow is doing everything in its power to normalize bilateral ties with the United States.

"It is well known that Russia did and continues doing everything possible to normalize bilateral relations, to develop ties and cooperation with the United States on crucial issues of the international agenda, including before all the fight against terrorism, proliferation of weapons of mass destruction, illegal drug trafficking, illegal migration, cybercrime, etc. We believed and we continue to believe that global issues could only be resolved jointly. We are sure that most people on the planet share this approach," the statement read.

The statement noted that the idea of Russophobia and confrontation has taken root within "certain circles" in the United States.

"Despite Washington’s constant attacks, we acted and continue acting responsibly and reservedly and have not responded to certain provocations until now. However, the latest events evidence that Russophobia and policy of open confrontation with our country have established themselves in certain circles in the United States," the statement read.