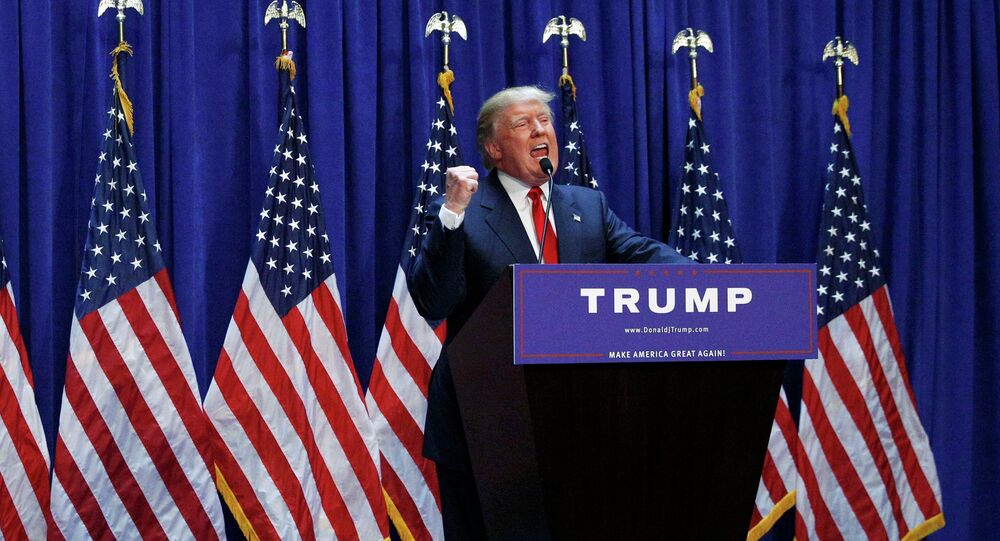 The frontrunner for the US Republican Party presidential nomination said he doesn't believe the North American Free Trade Agreement is beneficial to the US economy, and explained that "every agreement has an end."

© Flickr / BBC World Service/Valeria Perasso
Nearly Half of Americans Want Wall on Border With… Canada?
The North American Free Trade Agreement is a "disaster" that must be renegotiated or ended, Donald Trump declared in a television interview on Saturday.

The Republican frontrunner was asked in an interview with CBS News how he would stop US companies from exporting jobs from the US to Mexico if he were president.

"Let's say Ford moves to Mexico," suggested Trump. "If they want to sell their car in the US, they pay a tax."

Trump's suggestion runs contrary to the North American Free Trade Agreement, which established a free trade bloc across the US, Canada and Mexico in 1994 that has removed most tariff barriers on imported goods originating in other NAFTA countries.

"It's a disaster," declared Trump.

"We will either renegotiate it, or we will break it."

"Every agreement has an end, every agreement has a defraud clause. We're being defrauded by all these countries," claimed Trump, who was reminded by his interviewer that principle of free trade is a plank of the Republican platform.

"We need fair trade, not free trade. It's got to be fair," retorted Trump.

While 'fair trade' is a popular social movement to help producers in developing countries achieve better trading conditions, it's not clear that this is what Trump had in mind.

© REUTERS / Chris Keane
Donald Trump Slams Obama Administration Over Trans-Pacific Partnership Deal
Trump's promise to renegotiate or pull out of NAFTA recalls previous candidates for the Democratic presidential nomination Hillary Clinton and Barack Obama, who both pledged to renegotiate the agreement when they were on the campaign trail for the Democrat nomination in 2008.

When it was signed in 1994, NAFTA replaced the Canada-US Free Trade Agreement, in place since 1987, and the Canada-US auto pact, which from 1964 eliminated tariffs on automobiles in return for the US arranging for some auto assembly to take place in Canada.

Parts of NAFTA are set to be superseded by the proposed Trans-Pacific Partnership trade agreement, which is currently under negotiation between the US, Canada, Mexico and nine other countries in South America and the Pacific Rim region.

US, Partners to Resume Trans-Pacific Partnership Talks Behind Closed Doors