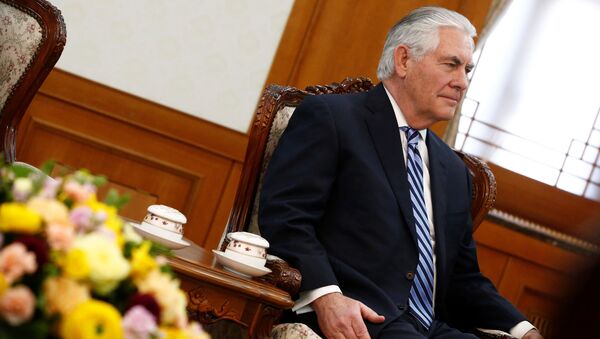 The Russian Foreign Ministry outlined what it expected from Rex Tillerson's visit.

MOSCOW (Sputnik) — Moscow hopes for fruitful negotiations with the US state secretary on his visit to Moscow, the Russian Foreign Ministry said in a statement Tuesday.

"In connection with the beginning of today's working visit to Russia by US Secretary of State R. Tillerson, we would like to note that we are counting on productive negotiations," the ministry said.

Tillerson is visiting Moscow on Tuesday and Wednesday for talks with Russian Foreign Minister Sergei Lavrov.

"This is important not only for the prospects of further bilateral interaction, but also for the general atmosphere in the international arena," the ministry underscored.

Moscow hopes that Washington will agree to an unbiased investigation of the recent chemical weapons incident in Syria's Khan Shaykhun.

"We firmly expect that Washington will agree to an objective investigation with the OPCW involvement of the incident with chemical poisoning on April 4 of the residents of Syria's Khan Shaykhun. The West groundlessly accused Syria's authorities of it, although militants of Jabhat al-Nusra [banned in Russia], who… produced landmines stuffed with poisonous substances, operate in that area," the statement said.

'Chemical Weapons': The Pipedream Excuse Used in Syria by Two US Administrations
The Russian Defense Ministry said on April 5 that the airstrike near Khan Shaykhun by the Syrian air force hit a terrorist warehouse that stored chemical weapons slated for delivery to Iraq, and called on the UN Security Council to launch a proper investigation into the incident.

"We expect to hear what the US plans to do in Libya, which has in fact become shattered as a result of NATO's military intervention, like Iraq," the ministry said.

Divide and Conquer: Trump's Deputy Aide Proposes to Split Libya Into Three Parts
In March 2011, several NATO states, including France, launched a military intervention in Libya aimed at ending all attacks against the civilians and establishing a ceasefire. Then-President of France Nicolas Sarkozy played an important part in promoting the EU sanctions against Gaddafi and urging for the intervention.

Russia awaits from the United States coherent clarifications on the whole range of issues of strategic stability and security in the Euro-Atlantic region.

"We await coherent clarifications of the US course on the whole range of issues of ensuring strategic stability and security in the Euro-Atlantic," the statement read.

Russia is concerned that the United States hints at the possibility of a military scenario regarding North Korea.

"We are very much concerned over what Washington has conceived about the DPRK, hinting at the possibility of a unilateral military scenario. It is important to understand how this correlates with collective obligations on the issue of the denuclearization of the Korean Peninsula in the UN Security Council resolutions," the ministry said.

The Empire Strikes East: US Navy Sends Its Warships to Korean Peninsula
On Wednesday, North Korea reportedly launched a ballistic missile from Sinpho, South Hamgyong province, in the direction of the Sea of Japan.

On Saturday, US officials announced that aircraft carrier strike group was sent to the Korean peninsula amid rising tensions. On Sunday, US National Security Adviser Lt. Gen. Herbert McMaster said that US President Donald Trump had ordered preparation of all possible options in order to protect the United States and its partners from North Korean threat.

Moscow is preparing for constructive cooperation instead of confrontation, but stands ready for any developments.

"We are ready for any eventuality, however proceed from the favorability of such work that will reduce international tension rather than raising it," the statement said.

It added that "we are preparing not for confrontation, but for constructive cooperation. We hope the US side wants the same."

Moscow hopes the United States does not refuse to take part in international consultations on Afghanistan this Friday.

"We hope that the US will not refuse to participate in international consultations on Afghanistan, whose next round will be held in Moscow on April 14," the ministry said.

Rags to Riches: Cash-Strapped Afghanistan Seals Deal on Sumptuous Swedish Estate
Afghanistan is in a state of political and social turmoil, with government forces fighting the continuing Taliban insurgency. The instability has persisted in the country since the 2001 US-led invasion to defeat the Taliban and al-Qaeda in the wake of the 9/11 attacks in the United States.

The Russian Foreign Ministry expressed hope that the United States would urge the Ukrainian government to adhere to the Minsk agreements.

"We especially hope that the United States will be able to neutralize the revanchist moods of the Ukrainian ‘party of war’ by using its influence on Kiev. Washington could also persuade the Kiev authorities to adhere strictly to their obligations under the Minsk agreements," the statement read.

Kiev 'on Verge of Losing Donetsk and Lugansk' With Donbass Blockade
The Donbass conflict erupted in April 2014 as a local counter-reaction to the West-sponsored Maidan coup in Kiev that had toppled President Viktor Yanukovych in February. Residents of the Donetsk and Lugansk regions held independence referendums and proclaimed the People's Republics of Donetsk and Lugansk. Kiev has since been conducting a military operation, encountering stiff local resistance.