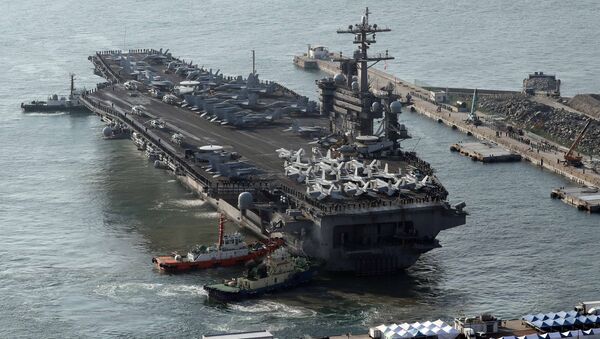 A US naval strike group is on its way to the western Pacific Ocean in a bid to provide its presence near the Korean Peninsula amid concerns over Pyongyang's missile tests, media reports said.

Heard it All Before: North Korea Says Proposed US Sanctions Are All Too Familiar
The US Navy's Carl Vinson Strike Group is set to be deployed to the Korean Peninsula amid growing fears related to Pyongyang's missile program, according to media reports.

The Guardian quoted US Pacific Command spokesman Commander Dave Benham as saying that the strike group's deployment to the area comes as "a prudent measure to maintain readiness and presence in the western Pacific."

"The number one threat in the region continues to be North Korea, due to its reckless, irresponsible and destabilizing program of missile tests and pursuit of a nuclear weapons capability," he said.

A US aircraft carrier-led strike group is to head toward the W Pacific near the Korean peninsula amid rising tensions: US media pic.twitter.com/kKo6RvGcUb

The deployment comes after the United States, South Korea and Japan agreed to strengthen military ties to counter a North Korea threat, in a trilateral deal that was clinched on Friday.

US General: Preemptive Strike May Be 'Only Option Left' With North Korea
On Wednesday, North Korea reportedly launched a ballistic missile from Sinpho, South Hamgyong province, in the direction of the Sea of Japan.

Since the beginning of 2016, Pyongyang has carried out a number of missile launches and nuclear tests, prompting worldwide criticism and the UN Security Council tightening its  sanctions against North Korea.

Earlier, media outlets said that the US National Security Council handed over a report to President Donald Trump to cite possible responses to Pyongyang's nuclear tests, including the return of nuclear weapons to South Korea, where elements of the US Terminal High Altitude Area Defense (THAAD) missile defense system is already being deployed.

THAAD, which South Korea agreed in 2016 to be deployed on its territory by the end of 2017, with the stated aim of countering threats from North Korea, serve as one of the main irritants in Beijing-Seoul ties.

Meanwhile, Viktor Ozerov, head of the Russian Upper House's Defense and Security Committee, told Sputnik that sending a US Navy strike group to the shores of the Korean Peninsula might push the leadership of North Korea to make rash actions.

"In the event that Pyongyang sees a threat to its security in the US Navy carrier group, it might push the North Korean leadership to take more hasty measures," Ozerov said.

He added that the US forces might even carry out a strike on North Korean military facilities.

"Such a risk hasn't been ruled out. The US strike on the airbase of the Syrian armed forces, which was not unanimously condemned by the UN Security Council, was explained [as a reaction to a] threat to US national security, and North Korea may be perceived in Washington as an even bigger threat," Ozerov said.

He stressed that the United States carried out strikes on Syria's airfield using alleged chemical attack in Idlib as a pretext, despite the fact that Syria was a part of the Convention on the Prohibition of Chemical Weapons.

"North Korea did not sign the convention on chemical weapons prohibition. It might provoke Trump's strike on North Korea," he added.

North Korea Calls Syria Missile Strike by US ‘Unforgivable'
On Thursday night, the United States launched 59 Tomahawk cruise missiles at the Syrian military airfield in Ash Sha'irat, located about 40 kilometers (25 miles) from the city of Homs.

US President Donald Trump said the attack was a response to the alleged use of chemical weapons in the Islamic militant-controlled Syrian province of Idlib on Tuesday, which Washington blames on the Syrian government.