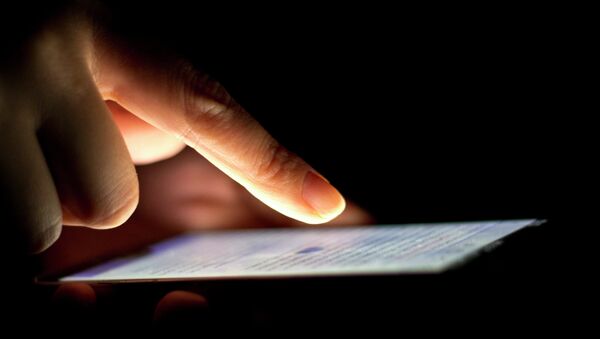 Li-fi, short for "light fidelity," is suddenly all the rage in the tech world after a nearly unknown French start-up demonstrated the data transfer technology in Barcelona, at the Mobile World Congress, the world’s biggest mobile device exposition, on Tuesday. The company, Oledcomm, is a pioneer of Li-fi, a technology that purports to be 100 times faster than Wi-Fi, with enhanced privacy.

Oledcomm’s founder, Suat Topsu, claimed that theoretically the device could load 200 Gigabits, or the equivalent of 23 DVDs, in one second. Topsu imagines applications for the technology well beyond smartphones, suggesting that coffee machines, washing machines, toothbrushes, and nearly any day-to-day necessity could be powered using the revolutionary wireless technology.

On Tuesday, tech and industrial titans alike expressed admiration for the new technology’s potential. Phillips, the world’s leader in light bulb manufacturing, expressed interest in licensing and expanding on the technology. Apple has plans to integrate the wireless protocol into their iPhone7, due for release later this year.

How the Technology Works

Li-fi uses frequencies generated by LED bulbs, which flicker at a rate of thousands of times per second, to transmit information wirelessly. The flickering transmissions have led Li-fi to be dubbed by some as the "digital equivalent of Morse code."

Not everybody at Tuesday’s Mobile World Congress is convinced that Li-fi will overtake Wi-Fi as the premiere wireless data transmission technology. One such skeptic is Frederic Sarrat, a technology analyst for PricewaterhouseCoopers, the world’s largest professional services firm. Sarrat derided the transfer protocol, which has been tested in real-world settings in France, Belgium, Estonia, and India, as nothing more than "laboratory technology."

Jim Tully, lead technology analyst for the IT firm Gartner, also has reservations, but sees the technology as having tremendous potential.

Tully observes that Li-fi has two critical market issues. The first is that it only works when a device is exposed directly to the light of the transmitting device and, second, is the limitation that, because it uses visible light, a Li-fi signal cannot transmit through walls.

Tully expects that substantial R&D advances in Li-fi technology will depend on how competitor technology Wi-Fi evolves in the coming years. "Wi-Fi has shown a capability to continuously increase its communication speed with each successive generation," says Tully, adding that the question is whether consumers require transmission speeds beyond what future generations of Wi-Fi can deliver.

Gartner notes that, while Li-fi does not transmit through walls, a limitation that relegates its utility to smaller spaces, the technology can be used in limited networks with a reduced risk of data theft. "Unlike Wi-Fi, Li-fi can potentially be directed and beamed at a particular user to enhance the privacy of transmissions." Wi-Fi uses radio waves and so requires the open transmission of data packages that can be captured by anyone nearby, including hackers and surveillance organizations.

The developing technology is undoubtedly refreshing to personal privacy advocates, and the flickering beams that may transmit tomorrow’s data at near light-speeds may leave security and anti-terrorism officials in the dark.