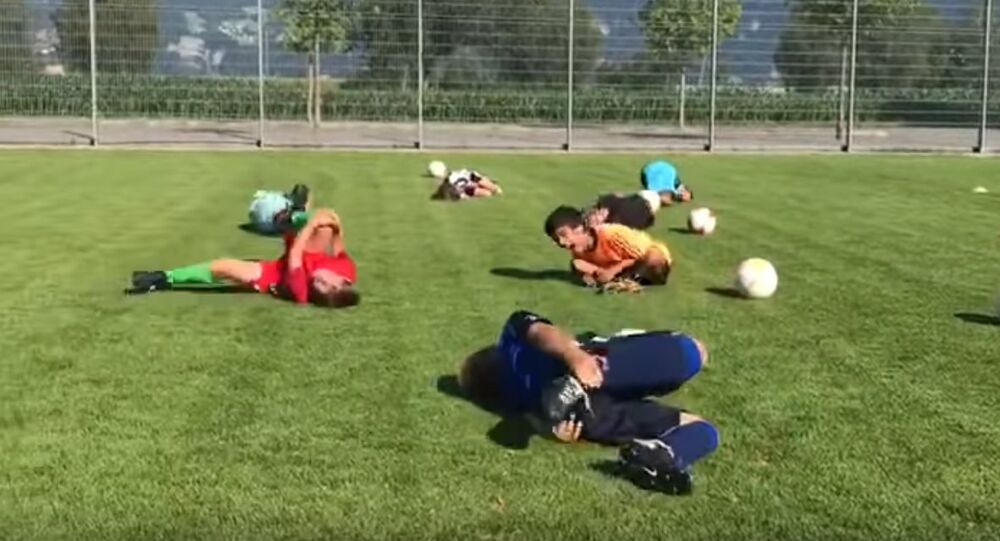 The Internet has been inundated with memes, gifs and mockery of Brazilian football star Neymar’s ridiculous diving and rolling in “agony“ on the pitch during the 2018 World Cup.

Carried away by all the hype around Neymar’s escapades, YouTuber Soccerdrill uploaded a video of a group of children Neymar-ing – basically, mimicking the footballer’s popularized flop during the championship.

The Brazilian star’s conduct during his latest game in the tournament has become an inspiration for Swiss kids: when the young players’ coach suddenly yells “Neymar,” the kids fall to the ground and start rolling and writhing in pain.

The clip has been widely shared to other social media platforms, with some tagging Neymar to ask for some “tips” for the kids:

Hey @neymarjr kids are training to be just like you. Looks good for now, but any tips? #Neymar #WorldCup #BRA pic.twitter.com/n42SGKNgfK

Kids enjoying themselves at The Neymar School of Excellence…pic.twitter.com/ieVljLgNUO

They need to work on their rolling though. Another three or four needed I think.

Many couldn’t just get enough of the “Neymar stuff,” calling the kids “hilarious”:

Training the Neymars of tomorrow! 🤣

Pity that a brilliant football talent has become a worldwide joke n a national embarrassment for #Brazil wt his retarded antics on field.

Time to man up and stop the drama pic.twitter.com/Ae19hgdQZ4

@neymarjr an inspiration for young players

Some, however, defended the Brazilian forward who has recently come under heavy fire for his antics on the pitch:

OK, but how about Cristiano's or Kane's dramatics? It's not like ONLY Neymar is a grand football thespian, no?

No, sir. Neymar is behaving like a champion and like a true leader to his teammates. Please don't let your envy distort the reality.

Earlier this week, RTS Sports reported that Neymar has already spent 13 minutes and 50 seconds diving and rolling around on the pitch at the 2018 World Cup.