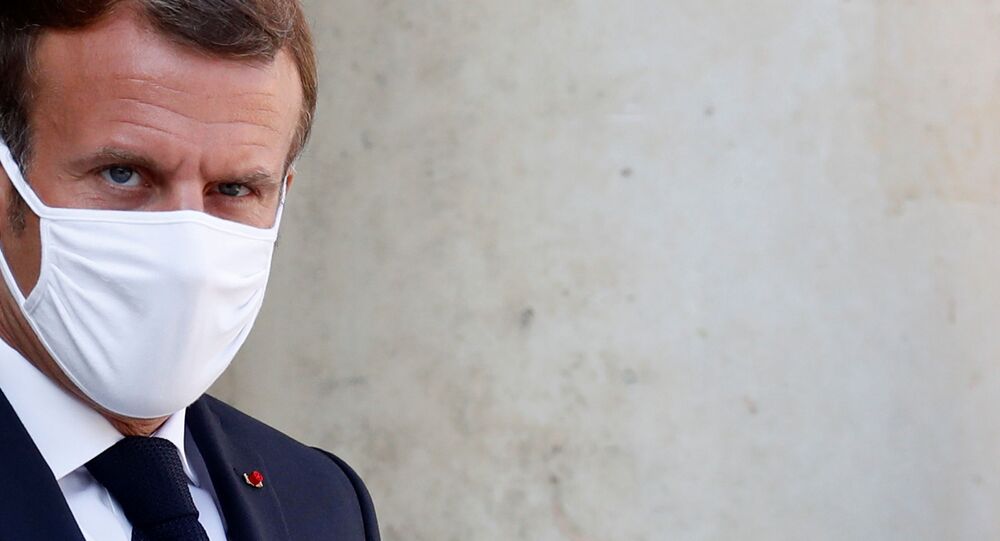 French President Emmanuel Macron called for a "modern new consensus" on tackling global challenges in his speech to the 75th UN General Assembly on 22 September.

Europe will not compromise with the United States on Iran sanctions, French President Emmanuel Macron told the UN General Assembly by video.

"We will not compromise on the activation of a mechanism that the United States is not in a position to activate on its own after leaving the agreement. This would undermine the unity of the Security Council and the integrity of its decisions, and it would run the risk of further aggravating tensions in the region", he said.

He continued on by saying that US maximum pressure on Iran is not working.

"The maximum pressure strategy, which has been underway for several years, has not at this stage made it possible to end Iran's destabilising activities or to ensure that it will not be able to acquire nuclear weapons. This is why France, along with its German and British partners, will maintain its demand for the full implementation of the 2015 Vienna Agreement and will not accept the violations committed by Iran", he stated.

On 21 September, US President Donald Trump signed an executive order greenlighting severe economic penalties against foreign nations, corporations, and individuals that violate the UN arms embargo on Tehran. The Trump administration also announced on the same day new sanctions and export control measures on 27 entities and individuals connected to "Iran’s proliferation networks", among them nuclear scientists and a logistical branch of the Iranian military.

Washington said that it would enforce the reinstatement of international anti-Iranian sanctions, despite no backing for this at the United Nations Security Council (UNSC).

US Secretary of State Mike Pompeo said on 19 September that the US would continue its "maximum pressure campaign" against Iran until a comprehensive agreement is reached.

Macron also mentioned that world leaders cannot let themselves be governed by the power struggle between the United States and China.

"The world today cannot be reduced to the rivalry between China and the United States, irrespective of the global weight of these great powers", he said.

The statement comes amid increasing tensions between the United States and China on several fronts. Relations between the two have seriously deteriorated over the past several years, with Washington accusing Beijing of unfair trade practices, an untransparent response to the novel coronavirus outbreak, human rights violations, and unwarranted territorial disputes with neighbouring countries.

China has denied the accusations and criticised the United States for various violations of international law.

On the Use of Chemical Weapons

The French president also demanded an explanation from Russia about the alleged poisoning of Russian opposition figure Alexei Navalny, saying that France will not accept the use of chemical weapons in Europe, in Russia, or in Syria.

"We will not tolerate the use of chemical weapons in Europe, in Russia or in Syria. This clarification must be swift and flawless because we will enforce our red lines", Macron said.

Prior to this, France and Sweden tested samples from Navalny independently of the Organisation for the Prohibition of Chemical Weapons (OPCW) and reportedly confirmed "poisoning with a nerve agent of the Novichok group".

The German government also said that doctors found traces of a nerve agent from the Novichok group in Navalny's system. Moscow responded by pointing out to the lack of evidence in Berlin's claims and noting that the Russian doctors had found no toxic substances in the politician. The OPCW is currently investigating the incident surrounding Navalny’s illness.

This year, the annual high-level UN General Assembly session is being held online because of restrictive measures imposed due to the COVID-19 pandemic.

World leaders submitted pre-recorded messages that are being presented by their countries’ delegates who are in New York.