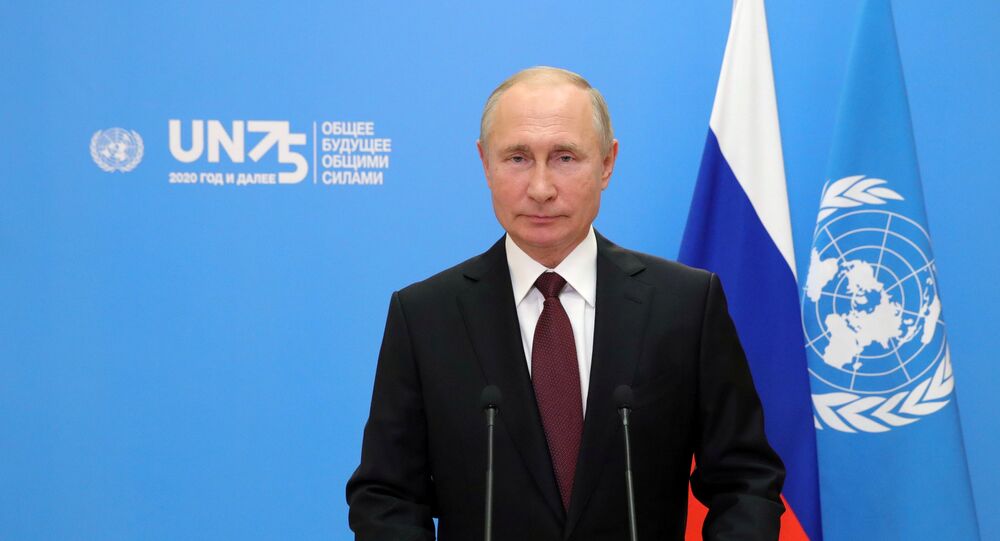 In a video message to the 75th United Nations General Assembly on Tuesday, Russian President Vladimir Putin said that the UN Security Council “should be more inclusive of the interests of all countries as well as of the diversity of their positions”.

Russian President Vladimir Putin has stated that the economic challenges posed by the ongoing COVID-19 pandemic have indicated the need to rid the world trade of “illegitimate sanctions”. He made the statement during Tuesday's video message to the 75th United Nations General Assembly, in which he focused on a whole array of pressing issues.

In particular, Putin touched upon the role of the UN Security Council, which he said should take into account the interests of all states more broadly.

“Our thinking is that the UN Security Council should be more inclusive of the interests of all countries as well as of the diversity of their positions, base its work on the principle of the broadest possible consensus among the states and at the same time continue to serve as the cornerstone of global governance [...]", the Russian president underscored.

He also praised the United Nations for successfully performing its mission throughout the organisation's existence.

"Looking back at the past decades, one can say that despite all the difficulties of the Cold War period, major geopolitical shifts and all the intricacies of today's global politics, the UN has been ably fulfilling its mission of protecting peace, promoting the sustainable development of peoples and continents, and providing assistance in mitigating local crises”, he pointed out.

Putin also said that the veto right of the five permanent members of the UNSC remains a unique instrument of global conflict prevention, which reflects the balance of power and should be preserved.

"Such a right pertaining to the five nuclear powers, the victors of World War II, remains indicative of the actual military and political balance to this day. Most importantly, it is an essential and unique instrument that helps prevent unilateral actions that may result in direct military confrontation between major states", he stressed.

The 75th anniversary of the United Nations is a cause to remember the principles of inter-state relations that are enshrined in the UN charter, Putin said, recalling that the world celebrates "two historic anniversaries" this year — 75 years since the end of WWII, and the establishment of the UN. The Russian president stressed that the UN Charter "remains the main source of international law to this day".

"I am convinced that this anniversary makes it incumbent upon all of us to recall the timeless principles of inter-state communication enshrined in the UN Charter and formulated by the founding fathers of our universal organisation in the clearest and most unambiguous terms. These principles include the equality of sovereign states, non-interference in domestic affairs, the right of peoples to determine their own future, and non-use of force or the threat of force and political settlement of disputes",  he stated.

Separately, Putin focused on Russia's idea of developing a greater partnership within Eurasia, which he said is becoming extremely relevant in responding to emerging challenges and crises in order to ensure the global economic growth.

"This very idea of qualitative integrative growth, the 'integration of integrations', is the one behind Russia's initiative to form a Greater Eurasian Partnership involving all Asian and European countries without exception. It is purely pragmatic and increasingly relevant”, he added.

"In general, freeing world trade from barriers, bans, restrictions and illegitimate sanctions would be of great help in revitalising global growth and reducing unemployment", the Russian president said.

Use of Outer Space

In his UN General Assembly message, Putin also said that Russia is promoting the idea of signing a deal between the leading world space powers that would prohibit the hostile use of space.

He added that Moscow is “putting forward an initiative to sign a binding agreement between all the leading space powers that would provide for the prohibition of the placement of weapons in outer space, threats, or use of force against outer space objects”.

Putin separately mentioned the issue of “primary importance” pertaining to the extension of the Russia-US Strategic Arms Reduction Treaty (START), which will expire in February 2021.

He said that Russia is engaged in negotiations with its US counterparts on the matter and that Moscow also expects mutual restraint to be exercised “with regard to deploying new missile systems”.

"I would like to add that as early as last year, Russia declared a moratorium on deploying ground-launched medium and short-range missiles in Europe and other regions as long as the United States of America refrains from such actions. Unfortunately, we have not received any reaction to our proposal from either our US partners or their allies”, the Russian president underlined.

Additionally, Putin indicated Moscow’s readiness to contribute to resolving regional conflicts and proposing constructive initiatives, despite "all the disputes and disagreements, and sometimes misunderstandings and even distrust of some [of Russia's] colleagues”.

Also, he called on the United Nations to look more seriously into matters related to cybersecurity, since modern digital technologies may fall into the hands of extremist and radical groups.

According to him, this threat is relevant not only in regional conflict zones, but also in quite prosperous countries.

"In this regard, matters related to cybersecurity and the use of advanced digital technology also deserve a most serious deliberation in the UN. It is important to hear and appreciate the concerns of people over the protection of their rights, such as the right to privacy, property and security, in the new era”, Putin said.

Separately in the message, Putin stressed that Russia is “completely” open and committed to partnership in the fight against the coronavirus, and proposes to hold an online conference on vaccines with the participation of states interested in cooperation in the creation of vaccines against COVID-19.

He signalled Russia’s readiness to share its experience and continue cooperating with all states and international entities, including the US, on supplying a reliable, safe, and effective Russian vaccine.

"The coronavirus has struck the staff of the United Nations, its headquarters and regional structures just like everyone else. Russia is ready to provide the UN with all the necessary qualified assistance; in particular, we are offering to provide our vaccine, free of charge, for the voluntary vaccination of the staff of the UN and its offices. We have received requests from our UN colleagues in this respect, and we will respond to those”, the Russian president said.

On Attempts to Distort History

In his speech, Putin also warned against attempts to review the results of the Second World War.

“Distorting the decisions of the Allied Conference and the Nuremberg Tribunal is not just meanness and a crime against the memory of the fighters against Nazism. It is a direct and destructive blow to the very foundations of the post-war world order”, he stressed.

According to the Russian president, it is “especially dangerous in the context of instability and degradation of the arms control system”.