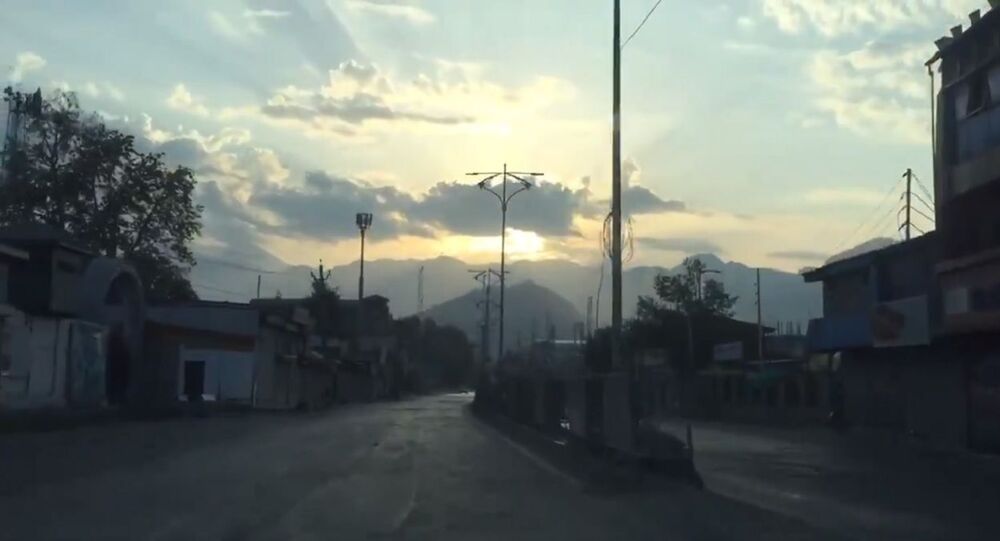 Only Birds and Strays on Deserted Kashmir Streets: View of the Valley Under Curfew – Videos

New Delhi (Sputnik): A day ahead of the anniversary of the revocation of Jammu and Kashmir's special status, the people of the region are reminiscing about last year’s scene when Amarnath pilgrims were rushed out of the valley, citing fears of a potential attack, and an additional 38,000 troops deployed to the area.

Indian Kashmiris woke to the blaring sounds of loudspeakers Tuesday morning, with patrol parties announcing that everyone should remain indoors. Videos emerging from the region show stray dogs and birds have taken over the streets that are otherwise packed with humans on a normal day.

Barricades have been laid out at different points to ensure strict compliance with the two-day curfew order for 4-5 August, imposed in anticipation of protests on the first anniversary of the revocation of Kashmir's decades-old semi-autonomy.

The authorities said they have received intelligence about "separatists and Pakistan-sponsored groups" planning to observe a Black Day on 5 August.

Curfew announced in Srinagar. That's rare. Not curfew. The announcement.pic.twitter.com/mbIaBtJHEE

Birds and stray dogs were seen taking over the main streets of Srinagar's densely packed market area and downtown.

Curfew has been imposed across the #Kashmir valley on August 4 and 5 by authorities, citing ‘specific inputs about violent protests’ on the first anniversary of the revocation of J&K's special status. pic.twitter.com/hUQkYqU8mt

Paramilitary troops even questioned the people moving around the city to maintain the restrictions imposed.

Kashmir under curfew ahead of Aug 5
A two-day #curfew has been imposed in the Kashmir Valley on Tuesday ahead of the first anniversary of the scrapping of #Article370, which granted special status to the erstwhile state of Jammu and #Kashmir.
Photos By @alidawood99 pic.twitter.com/kKZKD4UqF5

​The office of Srinagar's District Magistrate released the order stating the possibility of protests cannot be ruled out and violent protests will endanger public life and property. It stated that the restrictions are also keeping in mind the outbreak of COVID-19 to avoid large gatherings.

#Curfew in #Srinagar ahead of first anniversary of revocation of #Article370 -Srinagar District Administration fears violence on 5 August, 2020 by militants and Pak-sponsored groups and therefore imposes complete restrictions on public movements. pic.twitter.com/MmymfA8pUy

However, movement for essential services relating to COVID-19 is allowed.

A similar strict curfew was imposed in the erstwhile state on 5 August last year when country's Home Minister Amit Shah announced that Jammu and Kashmir's sepcial status under Article 370 of the Indian Constitution had been removed by a presidential order.

Flashpoints for violent protests and a blanket ban on communication were imposed, with phone and internet lines cut for months following the order. Also, hundreds of political leaders and people, advocating a separate homeland for Kashmiris, were detained.