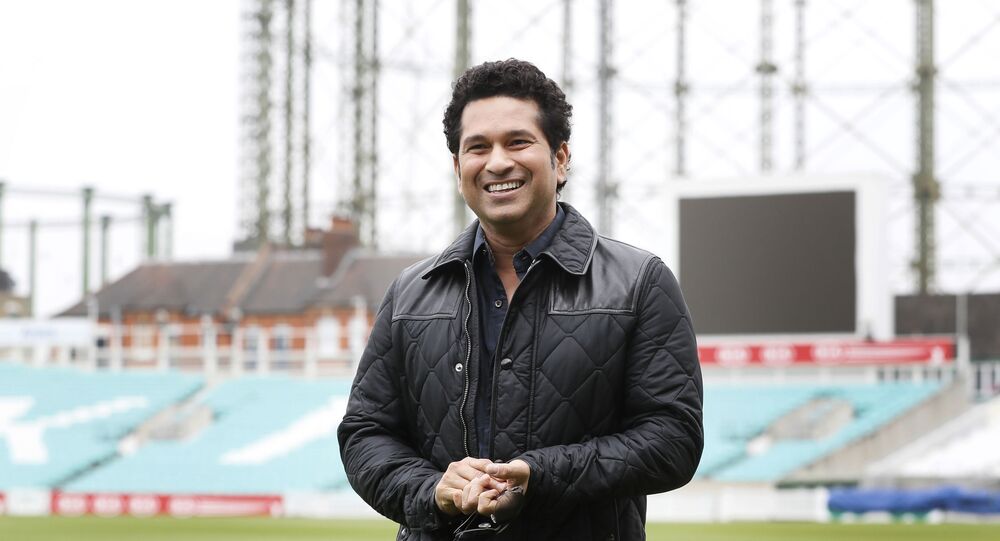 #HappyBirthdaySachin: Away From Runs & Tons ‘God of Cricket’ Has Three Weirdest Things in His Name

New Delhi (sputnik): If cricket is a religion in India then Sachin Tendulkar is a God. While the degree to which cricket is consumed in India is at an exponential level, Tendulkar is one of the reasons that half of India's cricketing population started following the sport.

Indian cricketing legend, Sachin Tendulkar, who has kept millions glued to their screens and is the reason for the synchronised meltdown of hundreds of people over his dismissal from the pitch, is celebrating his 47th birthday today.

Dubbed as “Masterblaster Sachin” for smashing records with his bat, the iconic cricketer has set the benchmark in cricket for generations to follow.

Apart from all the glorious awards, honours, and outstanding records, Sachin’s crazy fan following manifests itself in the most weird and bizarre ways.

Only Temple Can Make God Happy

A “Sachin Temple” was made in the Indian state of Bihar’s Patna to give a fitting honour to the god of Indian cricket. A life-size statue was erected by his super fan and regional actor Manoj Tiwary. The temple, sprawling over 6,000 sq ft (557 square metres) of land was built at an estimated cost of seven million rupees ($112,464; £69,805). It houses idols to other cricketers such as Indian captain MS Dhoni and star batsman Yuvraj Singh. A sports academy and cricket ground were also developed by the actor.

@sachin_rt statue in a temple built in Bihar. pic.twitter.com/1UkXTVTLjC

When a fan is a scientist studying creepy-crawlies then the tribute is equally nerve-tingling. In one of the most bizarre tributes expressing love for the cricketer, an arachnologist named a newly-discovered species of spider “Marengo Sachin Tendulkar”.

“I named (one spider) Marengo Sachin Tendulkar because Sachin happens to be my favourite cricketer," Prajapati stated.

Finally it is published after long waiting period!!
Two new jumping spiders from India!
First one is Marengo sachintendulkar named after my favourite cricketer, Master Blaster @sachin_rt (The God of Cricket). pic.twitter.com/aIXBGe05qz

In a little-known fact about the cricketer, Sachin has a ward in Asia’s largest and highest-security jail, Tihar, in New Delhi. Reportedly, the ward is the most sought after and privileged amongst the inmates. The cricketer also has a pavilion named after him at the MIG Cricket Ground in Bandra, Mumbai and a stand at Wankhede Stadium.

While heartwarming wishes poured in from all corners of the globe, the Board of Control for Cricket in India (BCCI) posted a tribute video reliving his glorious knocks against England in 2008.

As the Master Blaster @sachin_rt turns 47, we relive one of his glorious knocks against England in 2008.

He dedicated this ton - 41st in Test cricket, to the victims of 26/11 Mumbai terror attack.

The International Cricket Council (ICC), the world cricket governing body, hailed him as the “most prolific batsman of all time” and shared his historic records.

Happy birthday to Sachin Tendulkar, the most prolific batsman of all time!

To celebrate, we will give you the opportunity to vote for his top ODI innings in a bracket challenge!

​The cricketer, who turns 47 years old today, announced the end of his era on 16 November 2013. Millions around India watch his bow to fans after his 200th and final Test match against the West Indies in Mumbai's Wankhede Stadium with heavy hearts. The cricketer is the first player to score 10,000 runs in One Day International (ODI) cricket, and the highest run-scorer in ODI cricket. He is also the only player in the history of cricket to score 100 international centuries in a one-day match.

Sachin has also received the laureate of the highest civilian award in India, the Bharat Ratna.