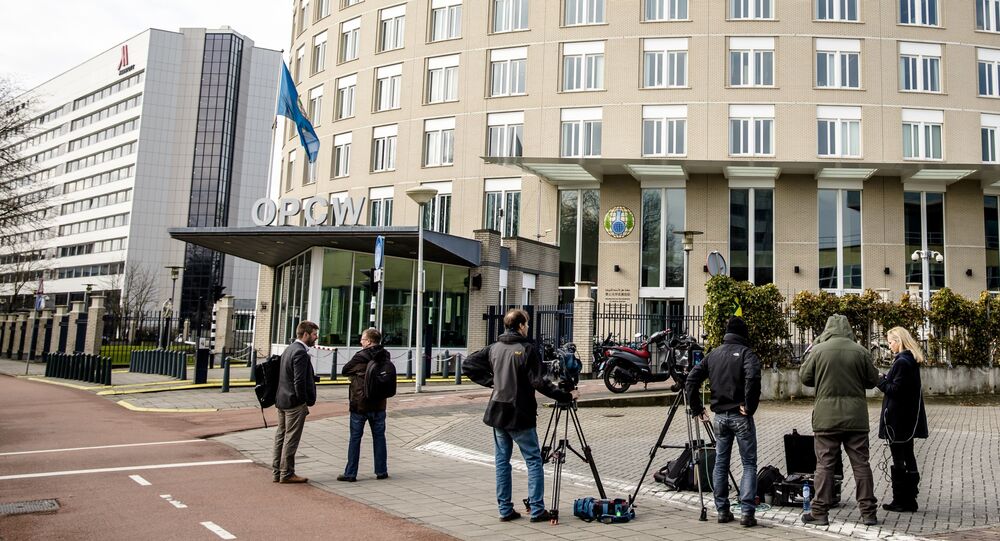 Russian Deputy Foreign Minister Sergei Ryabkov has refuted claims of the UK delegation to the OPCW that Russia and Syria denied access to the organization's mission to Syria's Douma.

Ryabkov further noted that these were the consequences of the US airstrikes in Syria that hampered the efforts of the Organization for the Prohibition of Chemical Weapons (OPCW) to probe the alleged attack in Douma.

The words of the senior official revoiced the statement of the Russian embassy in the Netherlands that said earlier in the day that the US was attempting to undermine the work of the OPCW that was set to start the probe into the alleged chemical weapons attack in Douma the same day, the US, the UK and France launched a missile attack on Syria.

"The US tries to undermine the credibility the Fact-finding mission in Syria even before it arrives at Douma. Russia confirms its commitment to ensure [safety] and security of the mission and will not interfere in its work," the Russian embassy in the Netherlands said on Monday.

Live from the @OPCW: the US tries to undermine the credibility the Fact-finding mission in Syria 🇸🇾 even before it arrives at Douma. Russia 🇷🇺 confirms its commitment to ensure safe and security of the mission and will not interfere in its work. pic.twitter.com/XFQ5x9anj5

New strikes by the United States and the coalition on Syria will lead to a harsher reaction on the part of those who advocate respect for international law, Russian Deputy Foreign Minister Sergei Ryabkov told reporters Monday.

"If something like this [recent shelling of Syria] happens in the future it will only increase the disengagement of healthy forces in the international community. I am convinced that other groups will join the group of countries having a responsible attitude toward international law," Ryabkov said.And that group of healthy forces, I am convinced, will give a more and more resolute political rebuff to such attempts on the basis of international relations," he said when asked what Russia's reaction will be if more attacks on Syria follow.

Ryabkov said Russia was guided by statements on the part of some Western countries' representatives that the US-led coalition has no current plans to continue attacks on Syria.

Earlier in the day, the UK delegation to the OPCW said Monday that Russia and Syria had not yet allowed access to the Organisation for the Prohibition of Chemical Weapons' mission to Douma.

According to the UK delegation, the OPCW director general has briefed the Executive Council on the Fact-Finding Mission’s deployment to Syria to investigate the alleged chemical attack.

READ MORE: Germany Was Not Invited to Take Part in Conducting Strikes on Syria — Berlin

Speaking further, UK Permanent Representative at the OPCW Peter Wilson said that Syrian military was the only one which could have carried out the alleged chemical attack in the city of Duma, no other group could have done this.

"Open source accounts allege a barrel bomb was used to deliver the chemicals, and a regime helicopter was seen above Douma on the evening of 7 April. The Opposition does not operate helicopters or use barrel bombs. Reliable intelligence indicates that Syrian military officials coordinated what appears to be the use of chlorine in Douma on 7 April. No other group could have carried out this attack," Wilson said.

Wilson accused Russia of "spreading conspiracy theories and misinformation" in order to undermine the integrity of the OPCW fact-finding mission investigating the Duma incident.

"Russia has argued that the attack on Douma was somehow staged, or faked. They have even suggested that the UK was behind the attack. That is ludicrous," he added.

The envoy noted that the legal basis of the Western strikes was clear and required certain conditions to be met, including evidence of a large-scale humanitarian suffering in need for urgent relief and lack of an alternative to the use of force.

"The objective of our military action was specifically the prevention of further use of chemical weapons in order to alleviate humanitarian suffering. It was not about interfering in a civil war. And it was not about regime change," the envoy noted.

The OPCW is holding a special session on Monday, discussing the recent escalation of the situation in Syria.

© AFP 2021 / JOSEPH EID
Assad's Cousin Living in Europe Amid Western Strikes: Nobody Cares About Syrians
According to the Russian Defense Ministry, the three countries fired over 100 cruise and air-to-surface missiles, most of which were shot down by Syrian air defenses.