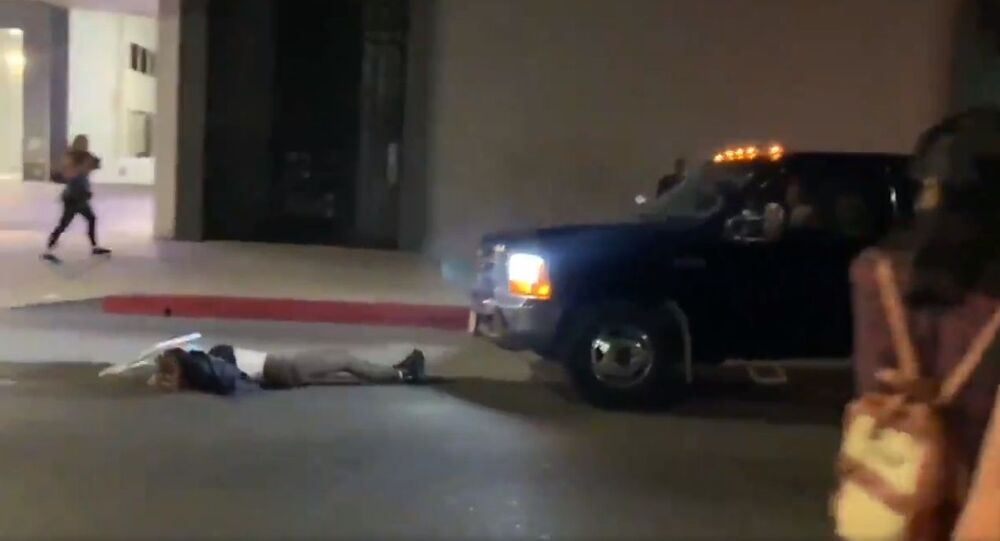 A Kentucky grand jury decision on Wednesday to exonerate two of the police officers of their involvement in the fatal shooting of black medical worker Breonna Taylor has prompted a new wave of protests stretching all across the US to the state of California where Los Angeles demonstrators took to the streets.

A video of a large car cutting a swathe through a group of Hollywood protesters on Thursday night has been doing the rounds on social media. According to The Los Angeles Times, the demonstrators had gathered next to Hollywood Forever Cemetery at 7 pm local time to stage a peaceful walk through the city in opposition to the court decision not to charge all three police officers involved with the death of Breonna Tylor.

​As the protesters moved down Sunset Boulevard, they were apparently struck by a dark vehicle, with one person visibly being thrown to the ground. The truck then accelerated into the crowd and apparently drove away. According to the Los Angeles Police Department, the incident happened as the vehicle's driver “became involved in an altercation” and “attempted to get away from the situation” while hitting one of the activists.

LAPD said that at least one person was taken away from the scene in an ambulance to a hospital with “minor injuries” after the incident.

Some viewers of the widely shared clip suggested that the driver’s actions were “intentional”.

The Wednesday ruling has shaken the country with a new wave of protests occurring in Washington, Florida, California and Taylor’s native Kentucky.

Taylor was a medical technician working in a hospital's Emergency Room who died during a narcotics raid in March after plain-clothes police officers entered her home in a search for two suspected drug dealers. Taylor’s boyfriend opened fire against the officers assuming the men to be robbers, insisting that they did not identify themselves. The officers returned fire, killing Taylor. Of the three officers involved, Jonathan Mattingly, Brett Hankison and Myles Cosgrove, only Hankinson has been charged with three cases of "wanton endangerment", since it was established during the investigation that the officers actually announced themselves and thus had the right of self-defence.