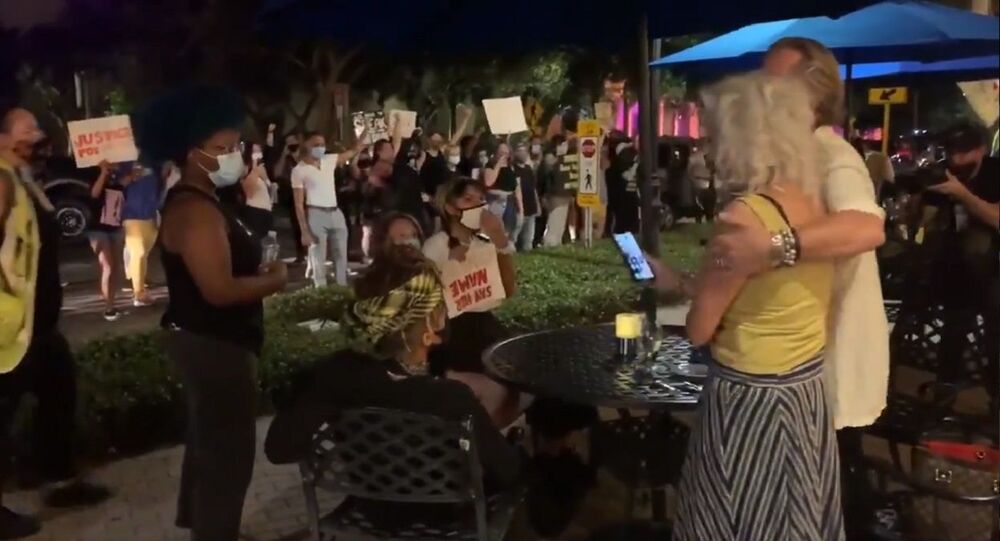 On Wednesday, a US Grand Jury ruled to not charge any police officer involved in the fatal shooting of African-American woman Breonna Taylor during a narcotics raid back in March, and only to indict one officer for wanton endangerment. This decision sparked a new wave of Black Lives Matter protests across the US.

A video showing an elderly white couple being harassed by BLM protesters in St. Petersburg, Florida has led to outrage on Twitter. The clip was shared by local Tampa Bay Times reporter Josh Fiallo, who noted that protesters were now going “restaurant by restaurant to chant at diners on Beach Dr. in St. Pete”.

The incident captured on camera was “the most significant”, he noted, as demonstrators took over the couple’s table who were seated together outside the restaurant, with one of the activists heard shouting abuses towards the woman and her partner.

Protestors are now going restaurant by restaurant to chant at diners on Beach Dr. in St. Pete. A lot of diners yelled back, starting multiple confrontations.

This one was the most significant. Protestors took over a couple’s table. Not sure why they were targeted specifically. pic.twitter.com/dzLM7KuCW9

I’m born & raised in St Pete. It absolutely turns my stomach to see these animals do this in my town. It’s freakin St Pete! Life’s pretty good here darlings, you’re not that deprived

Notice how they don't usually do this to anyone who can defend themselves.

It was not the first incident during the ongoing BLM demonstrations that showed protesters verbally harassing diners or even damaging restaurants' property. One circulating video which captured the unrest in Washington, showed how outside chairs and tables were pulled down and restaurant-goers nearly endangered as a crowd made its way though Adams Morgan, a popular DC neighbourhood, on Wednesday night.

Another clip shot in Kentucky reportedly revealed that some demonstrators even attacked “a black owned restaurant in Louisville” by deliberately targeting the diner's outdoor seating.

BLM are now attacking a black owned restaurant in Louisville. As Martin Luther King said ‘I have a dream, that cheaply made tables and chairs not suitable for external dining be cast aside on the road to equality.‘ This will solve racism pic.twitter.com/qob4pltJ9q

On Wednesday night, protesters in Kentucky, Florida, Washington, DC and other parts of the US took to streets in an opposition to grand jury’s decision not to bring criminal charges against Louisville police officers for the killing of Breonna Taylor, a 26-year-old African-American woman. Taylor was a medical technician, who was shot dead in her Louisville home on 13 March during a “no-knock warrant” narcotics raid by three un-uniformed police officers who were looking for two suspected drug dealers.

Taylor's boyfriend Kenneth Walker opened fire at the officers, whom he presumed to be robbers, prompting the police to fire back. Kentucky Attorney General Daniel Cameron said on Wednesday that the investigation had established that the officers have actually announced themselves and thus had the right of self-defence. No officers were charged with the killing of Taylor but one was indicted with three counts of wanton endangerment for shooting into neighbouring apartments.

Amid ongoing rioting, at least two police officers were reportedly shot in Louisville. They remain in stable condition, with a suspect now taken into custody, according to the Louisville Metro Police Department chief.