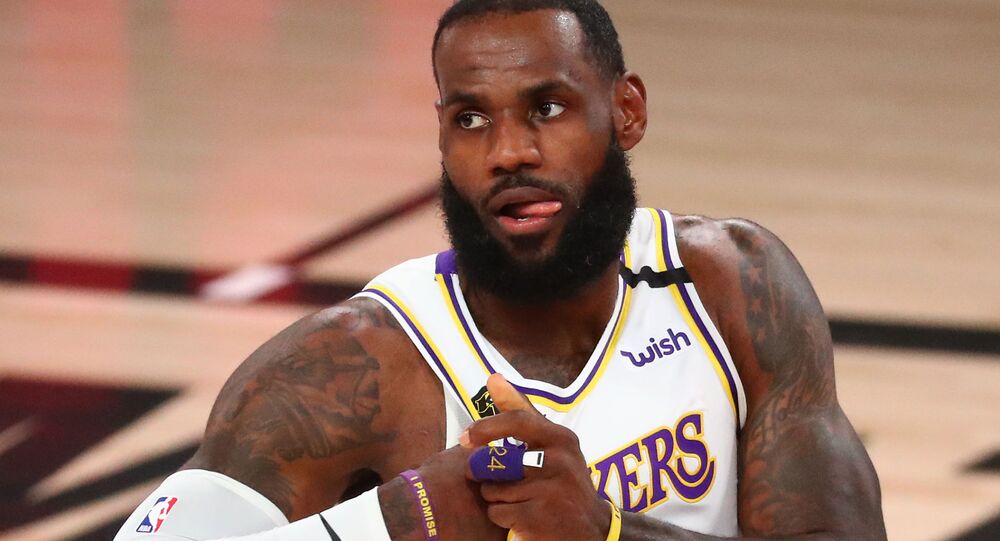 The story started on Saturday after UFC fighter Colby Covington blasted US basketball icon, LeBron James, as being one of the “woke athletes” and a “spineless coward”, who campaigns against police brutality. The fighter’s remarks came following his victory over Tyron Woodley, which he dedicated to law enforcement and “the Trumps”.

UFC fighter Colby Covington again took aim at Los Angeles Lakers star player LeBron James, as a number of NBA stars, as well as some figures from other spheres, stepped up to defend the giant of basketball.

In a Tuesday tweet, Covington appeared to call James out for a fight, claiming that the basketball star couldn’t “last 10 seconds with me”.

“LOL at the snowflakes that believe @KingJames could even last 10 seconds with me!” the UFC fighter tweeted. “If that coward had the b**ls or the ability to kick anyone’s a**, Delonte West would’ve lost his teeth long before his meth habit!”

LOL at the snowflakes that believe @KingJames could even last 10 seconds with me! If that coward had the balls or the ability to kick anyone’s ass, Delonte West would’ve lost his teeth long before his meth habit! pic.twitter.com/TQZ56FBnt1

The former interim UFC Welterweight champion was referring to 2010 allegations that James’ former teammate, West, had an affair with the 35-year-old player’s mother.

James has not responded to Covington’s latest remarks.

On Saturday, Covington defeated Tyron Woodley in five rounds via a TKO. The 32-year-old fighter dedicated his win to law enforcement and the US military, as well as to US President Donald Trump and his supporters. The well-known trash-talking sportsman took a verbal swipe at the LA Lakers’ LeBron James, calling him a “spineless coward” and one of the “woke athletes” who routinely call attention to police brutality and racism in the US.

“I want to dedicate this fight to all the first responders, all the military out there,” Covington stated. “This world would not be safe without you guys, you keep us safe, and not these woke athletes. I'm sick of these spineless cowards like LeBron James.”

Following these remarks and the victory over Woodley, Covington got a phone call during a post-match interview from Trump, who offered words of congratulations to his public supporter.

In an apparent response to Saturday comments by Covington, James told reporters following the LA Lakers's latest win over the Denver Nuggets, that his "critics" would "s*** their pants" if they had to face him in the arena - or in "the ring".

Lakers’ LeBron James on critics: “Anybody can talk from outside but if they got into the ring or got into the arena, probably 10 times out of 10, they’d s—- their pants.” pic.twitter.com/QjhIoKomyV

Rivers responded by saying, “Why tho?” while Carter-Williams said that it’s “weird how no one tells [Covington] to stick to fighting.”

O'Shea Jackson Jr., the son of American rapper Ice Cube, was among celebrities responding to Covington’s verbal attack on James. Jackson Jr. argued that “woke athletes” mentioned by the UFC fighter “tells me ‘Black athletes’ or ‘athletes who care about the advancement of black people in this country’.

And he may be trolling. This may be “what he does”. And that’s fine, but keep that heel shit in yo sport. I hope you see it Lebron and I hope it pushes you to win the championship and put your face EEEEEVVVEERRRYYYWWWWHHHHEEERRRREEEE!!!! Remind him everyday. Maybe he can wake up https://t.co/hxi8jPAh9k

LeBron James, who last month endorsed Democratic presidential nominee Joe Biden along with his running mate Senator Kamala Harris, has actively campaigned in recent weeks to bring attention to widespread police brutality against Black people in the US, in the wake of several officer-involved shootings, including the shootings of Breonna Taylor and Jacob Blake.

On 27 August, James and his LA Lakers teammates, along with the Milwaukee Bucks, briefly boycotted the 2020 NBA playoffs in the wake of the shooting of 29-year-old Blake, prompting former US President Barack Obama to publicly acknowledge their gesture and to finish the NBA season.