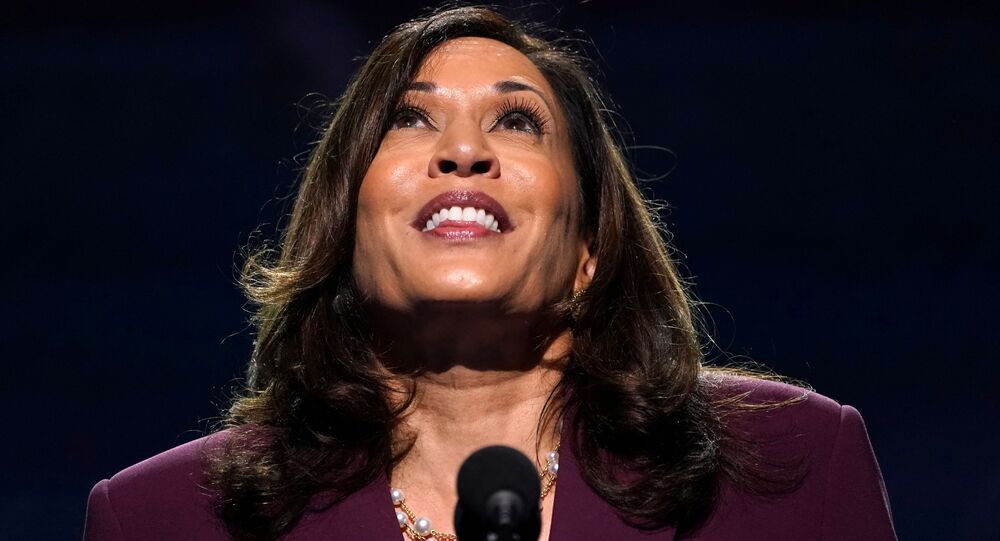 New Delhi (Sputnik): Senator Kamala Harris was officially nominated for vice president by the Democratic Party on Wednesday. If Biden wins the November election, Harris, a former California Attorney General who dropped out of the presidential race in December 2019, would become the first female vice president in US history.

After accepting her nomination for US vice president, Kamala Harris in her address at the Democratic National Convention appealed to diverse voters of the party to rally behind presidential candidate Joe Biden.

The stories of Kamala's childhood where she grew up as a Black woman in a Hindu household have been grabbing headlines ever since the announcement of her being picked as Joe Biden's running mate. Around one million Indian-Americans voters in the US are observing Kamala closely.

In her address on Wednesday, Harris said, "Family is my husband Doug. Family is our beautiful children, Cole and Ella, who as you just heard, call me Momala. Family is my sister. Family is my best friend, my nieces and my godchildren. Family is my uncles, my aunts, and my chithis".

The mention of chithis, a Tamil word for aunts, might have sent Americans into a frenzy but Indian-Americans and Tamilians rejoiced at the moment, taking to Twitter to express their feelings.

I literally have tears in my eyes. @KamalaHarris just said "chithis" which means auntie. My heart is so full right now

Millions of Americans are googling "chithi", so next time someone @ me that Kamala Harris isn’t proud of her Indian heritage... 💪🏽

Every Tamilian signs up to vote

Kamala Harris, You had me on "chitti" (Tamil word for aunt)! 😆Seriously though, why aren’t we voting for her to be president!? https://t.co/z94317Dk3i

Watching Kamala Harris speak with such pride about her South Indian mom, while I sit next to my Amma, and my nephew who calls me Chithi, is so special. https://t.co/hLMNKrBBte

​Harris' mother Shyamala Gopalan is from the southern Indian state of Tamil Nadu, where Tamil is spoken. Netizens are highlighting that Harris' Indian upbringing is reflected is her speech and nobody should doubt her pride in her Indian heritage.

Harris even recalled a lesson from her mother during the speech and said that she was instilled with a vision of "our nation as a beloved community — where all are welcome, no matter what we look like, where we come from, or who we love".

A New York Times report, published earlier this week, has claimed that during her election to California Attorney General Harris had asked her aunt to break coconuts for good luck at a Hindu temple.