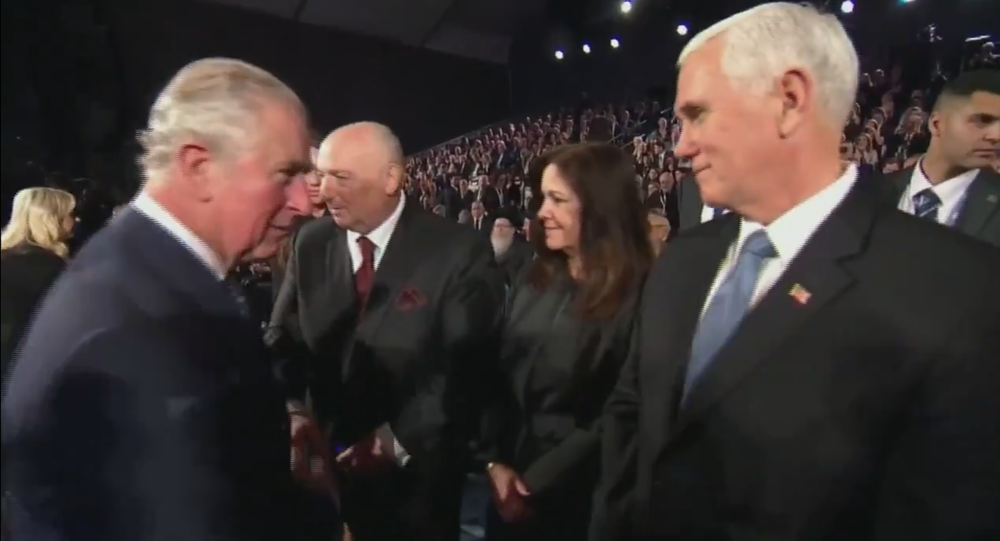 A video clip from the Fifth World Holocaust Forum in Jerusalem, Israel, went viral on social media for showcasing what users perceived to be a nonverbal diss from Charles, the prince of Wales, toward US Vice President Mike Pence.

Footage from the World Holocaust Forum showed the prince of Wales taking the time to greet dignitaries attending the event. However, when it came time to shake Pence’s extended hand, Charles appeared to not just refuse his handshake, but also briefly make eye contact with the vice president before proceeding to engage with Israeli Prime Minister Benjamin Netanyahu.

With speculation concerning the apparent royal snub mounting on social media, Katie Waldman, Pence’s press secretary, attempted to come to her boss’s rescue via tweet and insisted that the exchange was not representative of the relationship between the two officials.

This is not true. VP and Prince Charles spoke prior to entering the event floor and after his remarks as well. https://t.co/Qr79TN42Ax pic.twitter.com/LhsQVtHMRF

She went on to post a video of the two speaking backstage at the World Holocaust Forum on Thursday.

Video of @Mike_Pence and Prince Charles backstage in Jerusalem. pic.twitter.com/PWOypUaUs3

Nevertheless, netizens dragged Pence over the purported snub and created their own narrative surrounding the situation.

He is all of us here: pic.twitter.com/qdvcLeLwD0

I don’t think I’ve ever seen a snub so blatant as Prince Charles taking half a glance at Mike Pence and being like: “Not today, Satan.” pic.twitter.com/9hZhj7UbEm

Love it! But next time, skip Netanyahu too.

I've seen this move before pic.twitter.com/8Z02HhKpt2

He skipped Mother, too.

That speaks volumes. trump and Pence don't realize how easily others see through them. They're both rotten to the core and anyone not drinking their koolaid can smell it a mile away. Good on Charles. 😊

Many social media users theorized that Charles’ seeming snub of the vice president had to do with his stance on climate change, support of 17-year-old climate activist Greta Thunberg and/or US President Donald Trump’s treatment of the environmental advocate.

“Global warming, climate change, the devastating loss of biodiversity are the greatest threats that humanity has ever faced and one largely of our own creation,” the prince of Wales said during the World Economic Forum earlier this week, as reported by Reuters. He also spoke glowingly of Thunberg after meeting her at the forum, telling reporters that “she represents one of the main reasons why I've been trying to make all this effort all these years … I didn't want my grandchildren to accuse me of not doing something about this in time,” according to EuroNews.

Looks like Prince Charles isn't a fan of how the Trump administration is attacking Greta Thunberg, either. Watch as he passes over Mike Pence in the recieving line. pic.twitter.com/afOtYTrr9Y

Prince Charles is devoted to climate change and Pence thinks it's a hoax. That's only part of it.

Sorry to break it to you all, but there are many many many people out there who deeply dislike the current US administration. Prince Charles has strong feelings on the environment - if your government is pulling out of global climate accords, why would you expect a handshake?

At the same time, many supporters of Pence and the Trump administration came to the vice president’s defense.

Not quite. Pence was holding his hands together until after Charles passed then Pence reached out to pat Charles on the back, which is where you see Pence’s hand drop, making it look as though Charles has snubbed his outstretched hand.

British people are the meanest people.

Mike Pence didn't offer his hand. He held them together. Charles stopped and looked like he was going to shake hands with him but then saw the hands not extended and moved on, awkwardly.