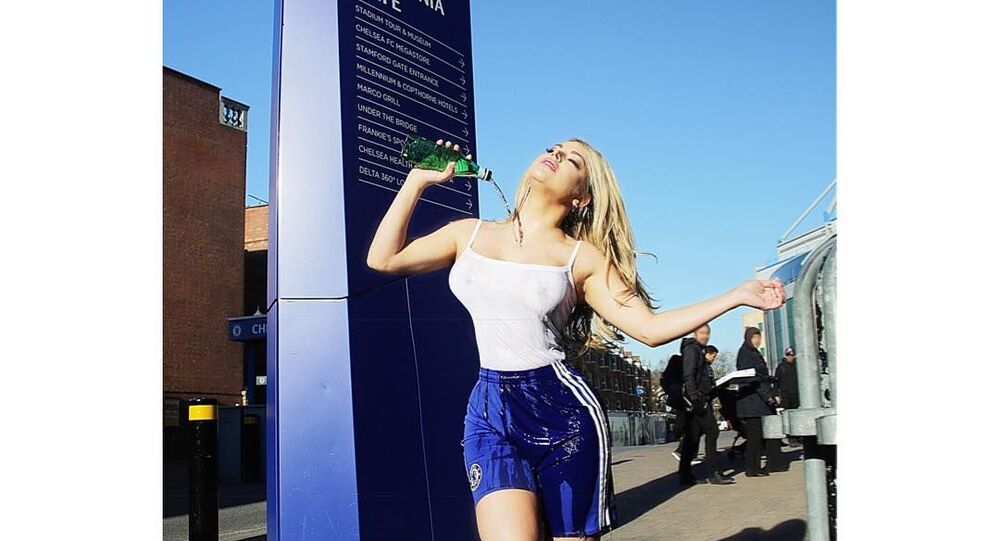 Jessica Lopes was crowned the second runner-up of Miss BumBum World, which has evolved into a major international event that has been bringing women with the most outstanding derrieres onto one stage since it was first held in 2011. The curvy beauty was born in Brazil and lives in Britain, so it seems natural that football is one of her passions.

Miss BumBum UK Jessica Lopes, said to be an ardent Chelsea fan, told The Daily Star that she is ready to do everything for her team to win the Premier League, even to part with her last piece of clothing.

“I always watch Chelsea games wherever I can. I would do everything for Chelsea, even go fully naked if they win the title”, the young woman, who builds her modelling career around her prize-winning rear end, asserted.

The Brazilian-born girl, who has lived in Britain for the past six years and represented the UK, said that she is watching the Premiere League battles closely and even named her favourite forwards, including Sergio Aguero, Mohamed Salah, Roberto Firmino, and Norwich striker Teemu Pukki, whom she wants to see within the Blues’ ranks.

“There are a lot of strikers I like, you’ve got Sergio Aguero, Mohamed Salah, Roberto Firmino and there are a lot of English players as well. The one who is looking most dangerous though scoring goals is Teemu Pukki, he would be a good signing”, she told the outlet.

Chelsea, which smashed Southampton 4-1 on 6 October, is now ranked fifth in the League’s table, with 14 points. Lopes’ favourites, whose season start was botched under Frank Lampard following a 4-0 loss to Manchester United and a draw with Leicester, is to face Newcastle United next.

The return of the owner of the UK’s best derriere to modelling after a battle with ovarian cancer has become more successful, having come in third at the famous buttocks beauty contest Miss BumBum World 2019. In the finals, which took place in Mexico in late September and included the curvy contestants marching in G-strings on stage, she lost to France’s Rayane Souza and the competition’s only two-time winner, Brazilian model Suzy Cortez.