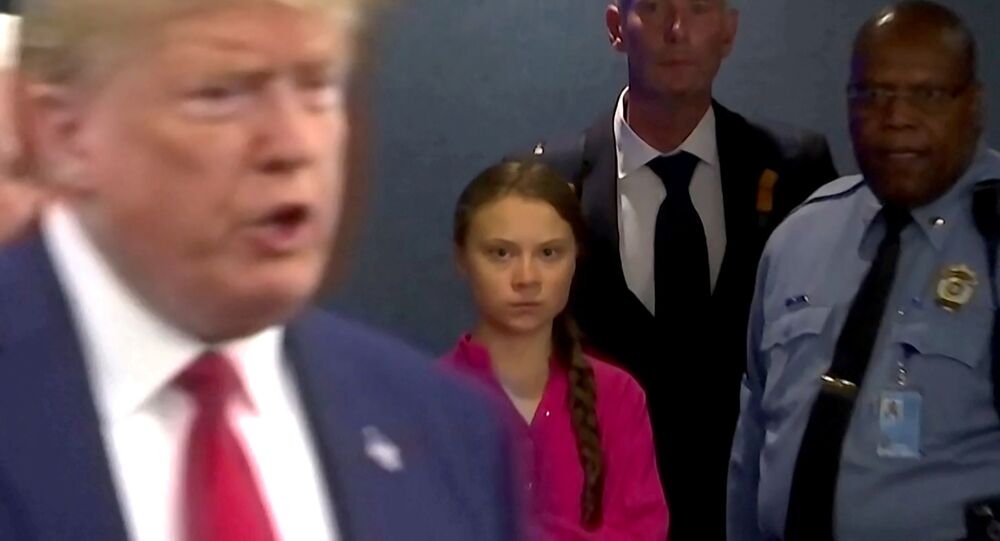 Following the viral staredown in their first ever meeting during the UN General Assembly, climate activist Greta Thunberg, the driving force behind the international school strike movement, has responded to US President Donald Trump by adding his take on her to her Twitter biography.

In her passionate address to UN delegates, which her supporters have already likened to Martin Luther King's “I Have a Dream” speech, a tearful and visibly shaking Thunberg accused world leaders of “having stolen her dreams and her childhood”.

“People are suffering. People are dying. Entire ecosystems are collapsing. We are in the beginning of a mass extinction. And all you can talk about is money and fairy tales of eternal economic growth. How dare you!”, Thunberg exclaimed.

​To this, Donald Trump, who walked past Thunberg's stare without paying her a glimpse of attention, tweeted: “She seems like a very happy young girl looking forward to a bright and wonderful future. So nice to see.”

While this description was widely seen as sarcastic, as Trump often finds himself as one of the main targets of the climate movement for having pulled out of the Paris Agreement on climate change, Thunberg responded by co-opting his quote in her Twitter bio, much to the amusement of her followers and the mainstream media, who praised the “brave teen” for trolling back at the US President himself.

​Still, given the controversy surrounding Greta Thunberg, it is no surprise that her speech sparked a lot of criticism as well.

Among others, Fox News pundit Michael Knowles called Thunberg “mentally ill”, alluding to her long medical record that includes Asperger's and OCD and suggesting that it was shameful of parents and the media to exploit a sick child.

The doomsday clock is ticking...we expose the agenda, and who’s really behind it. ⁦@FoxNews⁩ #IngrahamAngle pic.twitter.com/n2QDkT9RKM

​Thunberg's incessant climate activism aided and abetted by mainstream media,has earned her a plethora of prizes and awards, as well as a Nobel Prize nomination.