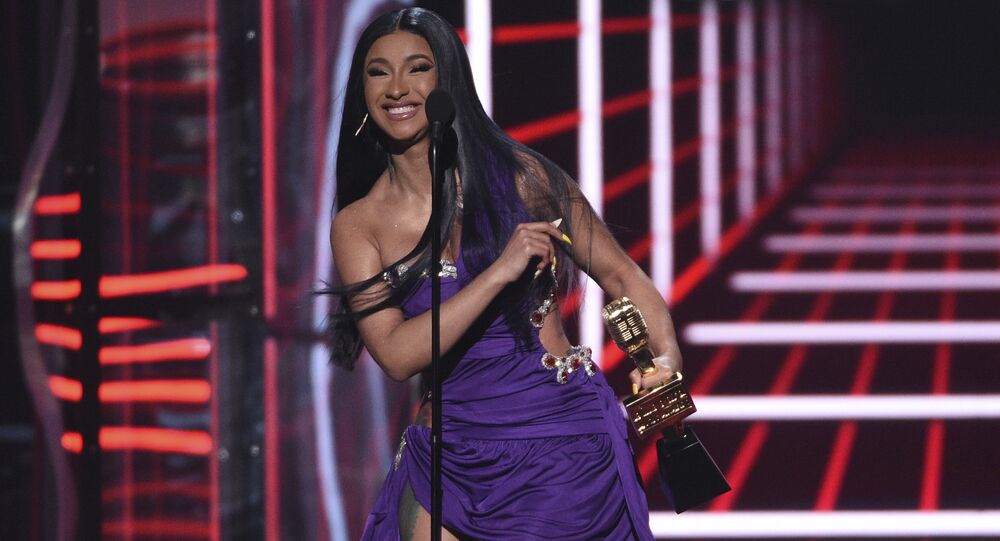 The National Football League announced its partnership with Roc Nation, the entertainment company founded by rapper Jay-Z, last week that will shape the NFL's social justice programme. But the initiative has already backfired, with critics reminding the heralded hip-hop star of the years-long Colin Kaepernick controversy.

Cardi B believes that Jay-Z, who's catching much flak for Roc Nation's partnering with the NFL, might contribute to the career revival of former 49ers quarterback Colin Kaepernick, who claimed to have been blackballed by the league for kneeling during the US national anthem in protest against police brutality against people of colour.

While many, including Kaepernick's girfriend have blasted Jay-Z for teaming up with the NFL, the "Press" MC is convinced that Beyoncé's husband will bring change to the NFL's culture, and that his motives are pure.

"I think that he could make a change. I feel like he didn't went [sic] on an NFL deal without an agreement. I feel like he went in there like, 'All right, if you guys want me to work with y'all, y'all need to put my peoples in there'. I feel like he's gonna change it", Cardi said.

Her support for Jay-Z has set off a major storm on Twitter, with may social media users arguing that she'd do anything for clout, and that she doesn't care either about Kaepernick or social injustice:

Clout chasing. Cardi has a Super Bowl commercial; she doesn’t give a shyt about Colin Kaepernick or police brutality or social injustice. She’s looking for attention.

She’s just tryna be relevant at this point

Some, however, appeared to share her point of view, contending that in order to make a difference, Jay-Z needed to have "a seat at the table":

I know people are giving Jay a bunch of crap ,but change cant happen if you don't have a seat at the table. People have to let this play out to make an opinion.

I agree with her. @iamcardib pic.twitter.com/eicNU7UsRh

Yea I agree w @iamcardib no way jay z going to make a deal as such without really placing his cards on the table first.. like take or leave type shit. Jay Z don’t need the NFL.. he knows how to make money wherever he plants his feet.

Others, meanwhile, chimed in to say that they cannot take Cardi's words seriously and brutally mocked the Bodak Yellow rapper:

She needs to make a change in her grammar

"I feel like he didn't went on an NFL deal without an agreement."

I almost had a seizure reading this

The partnership, announced last Tuesday, will focus on social justice issues, with Jay-Z telling reporters that he will bring attention to the same problems that Kaepernick was protesting when he took a knee during the national anthem before multiple 2016 NFL presession and regular-season games.

"I think we forget that Colin's whole thing was to bring attention to socal injustice. So, in that case, this is a success. If protesting on the field is the most effective way, then protest on the field. But if you have a vehicle that can inspire change or you can speak to the masses and educate at the same time as well, tell people what's going on, so people are not controlling your narrative, not telling you, 'your protest is about this'. I think we've passed kneeling. I think it's time to go into our actionable items", the Brooklyn-born rapper said.

The Grammy-winning rapper, who turned down the Super Bowl halftime show this year, has faced much backlash for his business deal with the league after previoulsy showing solidarity with Kaepernick.

During a Wednesday press conference, Jay-Z and NFL Commissioner Roger Goodell claimed that they had talked to Colin about the initiative, however, the rapper did not commit to engaging the former Niners quarterback in the future.

"I'm not his boss. I can't just bring him into something. That's for him to say", he said, when asked if Kaepernick would be involved.

Colin's girlfriend Nessa, meanwhile, insists that the footballer was not involved with the initiative, and not did get a heads up from Jay-Z, who even wore a Kaepernick jersey during a 2017 Saturday Night Live performance. 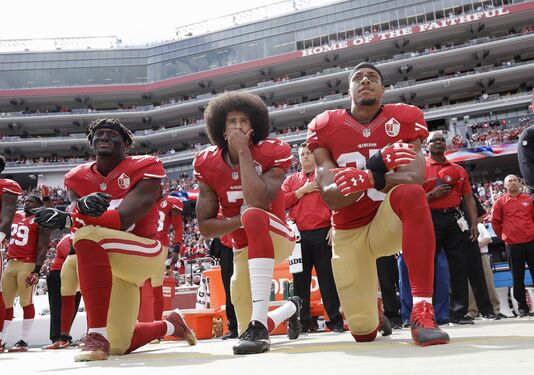 © AP Photo / Marcio Jose Sanchez, File
FILE - In this Oct. 2, 2016 file photo, from left, San Francisco 49ers outside linebacker Eli Harold, quarterback Colin Kaepernick and safety Eric Reid kneel during the national anthem before an NFL football game against the Dallas Cowboys in Santa Clara, Calif. In recent months, Colin Kaepernick has become comfortable with people knowing him as more than a laser-focused football player as he always previously preferred it. Perhaps, through the anthem protest and his emergence as an outspoken activist for minorities, Kaepernick has improved his image in the process.

The announcement of the partnership arrived on the three-year anniversary of Colin's first protest, in which he took a knee during the pre-game singing of the national anthem in what he said was a protests against racial injustice and police brutality.

Today marks the three year anniversary of the first time I protested systemic oppression. I continue to work and stand with the people in our fight for liberation, despite those who are trying to erase the movement! The movement has always lived with the people! ✊🏾

His actions sparked much criticism from senior White House officials, and President Donald Trump himself, who called kneeling during the national anthem a sign of "disrespect to our great country". The NFL has, meanwhile, been slammed for its supposed shunning of Kaepernick, who eventually opted out of his contract with the San Francisco 49ers in 2017, but has not been signed by a team since his protests kicked off.

He later filed a collusion grievance against the League, which resulted in a controversy-sparking agreement on settlement terms, including confidentiality provisions.