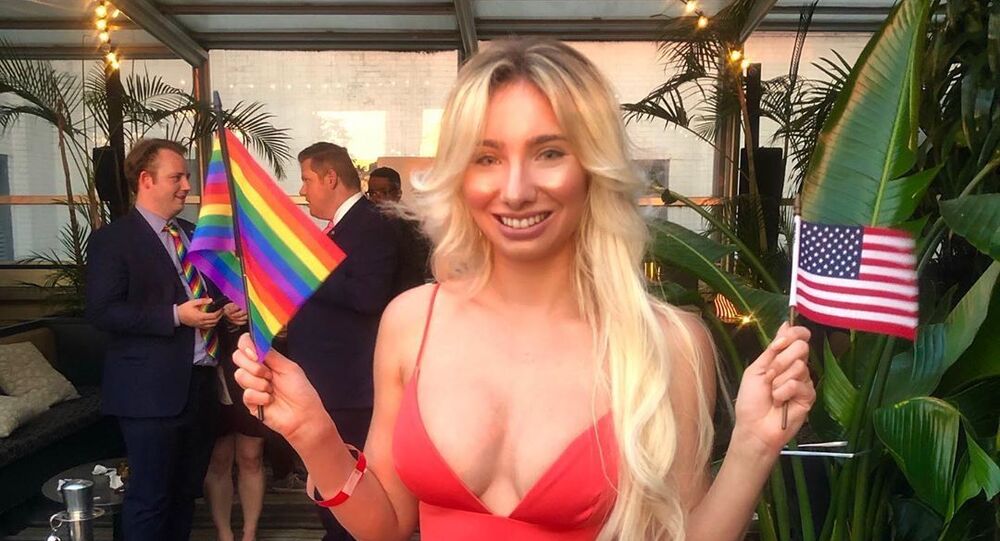 This Republican Party official describes herself as a hardcore patriot and a staunch supporter of US President Donald Trump. Her self-imposed job is to sway the predominantly Democratic New York district in favor to politically favor the Republican party.

Despite her high-profile employment, she’s arguably better known for her social media posts in revealing bikinis and public appearances in dresses with deep cleavage.

On the Fourth of July holiday, Catsimatidis tweeted a photo of herself holding US flags while wearing a scanty US flag-decorated bikini.

Celebrating the greatest country in the entire world and those who fought to keep it free!!! Shame on people who disrespect our flag and are lucky enough to live in the USA. 🇺🇸 #USA #America #independenceday #SupportOurTroops pic.twitter.com/RNFdSn3MmI

​“Shame on people who disrespect our flag and are lucky enough to live in the USA,” she tweeted. According to the US Flag Code, the American flag “should never be used as wearing apparel, bedding, or drapery.”

Happy Thanksgiving from the Bahamas! 🍁 🦃 🍁

​Her clothing preferences stand out when she poses next to senior political figures, such as Trump’s 2020 presidential campaign advisor Kimberly Guilfoyle and her boyfriend, Donald Trump Jr.

Thank you @DonaldJTrumpJr and @kimguilfoyle for coming out last night to support the @Manhattan_GOP! pic.twitter.com/fpcJOl6jn6

​The daughter of John Catsimatidis - the owner of US store chain Gristedes - plainly refuses to dress conservatively or “like a man” to be taken seriously, The Daily Mail writes, and she does it on purpose.

“This is who I am as a person. I am very confident about who I am and people pay attention to that stuff,” Catsimatidis said in an interview on her social media posts. “So many feminists dress like a man and try and act like a man in order to succeed. To me what it really means to be a feminist is to embrace what you have.”

Last night the Manhattan GOP was PROUD to support Pride Right and the LGBTQ community. And we were PROUD to run 2 gay candidates on our ticket last year! #PrideMonth 🇺🇸🌈 pic.twitter.com/6vObdkNwaF

​She describes herself as a “patriot at the core,” adding that nothing means more to her than her country.

“For me it's my service to my country because, at my very core, I am a patriot. Nothing means more to me than the United States of America,” she said.

Happy #independenceday everyone! Today I am feeling grateful that I get to live in America, the greatest country in the world, and thankful for those who fought to defend my country and my freedom! ❤️🇺🇸❤️🇺🇸

Her senior political position is unpaid. Her father makes her fortune via the family business, The Daily Mail report says. John Catsimatidis ran for mayor of New Yor, but withdrew after losing to Joseph J. Lhota, who then lost the general election to Bill de Blasio.

​Catsimatidis is a staunch Trump supporter, and praised the president for his economic achievements, but added that she “cannot defend [Trump’s] every tweet.”

“People in this country have more money in their pockets. The middle class has more jobs, how can you not support him?,” she said.

Despite being a Trump supporter, she opted out of wearing Trump’s trademark MAGA hat over concerns for personal safety after a group of ‘antifa’ activists vandalized her office in 2018, The Daily Mail report says.