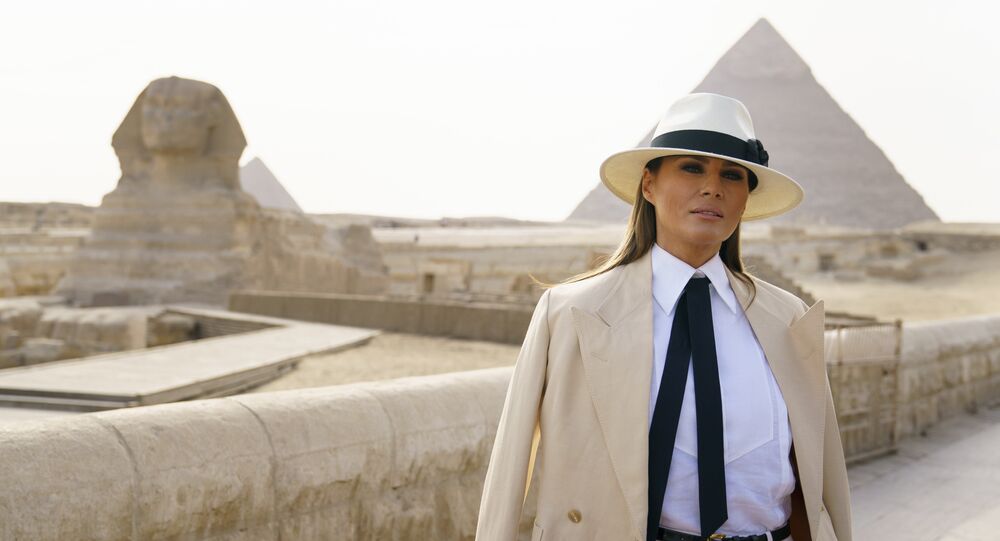 Jacqueline Kennedy Onassis lost her first husband in a shocking assassination and gained fame as one of America’s most popular first ladies. But former President John F. Kennedy’s wife has been challenged recently by another FLOTUS.

In his birthday interview with Fox & Friends, President Donald Trump revealed that the US has a new Jackie Kennedy Onassis, meaning his wife, or as he put it, “Melania T”. The comparison popped up during the discussion of Trump’s plan to repaint Air Force One red, white, and blue. The president stated that the current “baby blue” scheme “doesn’t fit” with them, adding it was “Jackie O and it was good” but suggested this was in the past.

“We have our own Jackie O, it’s called Melania, Melania T”, Trump stated, praising his partner of many years and her style in particular.

He argued that although Melania gets “no credit” from the media, she gets credit from people, saying “People love her”.
The US president specifically complimented his wife’s trademark style and defended her love of high heels, which has brought mockery and criticism upon her on several occasions, including her opting for stilettos for their trip to Texas after a devastating flood. Trump noted that when he speaks to big crowds, people often hold up banners, expressing love and admiration towards the first lady, including posters, reading “We love high heels”.

These words of affection prompted a storm on social media as many seemingly felt offended by the comparison between Democratic President John F. Kennedy’s wife and Melania, married to one of the most vocal critics of the Democratic Party. They insisted that the parallels were out of place.

There’s absolutely nothing in common. Ah, one thing: both are /were thin.

The Kennedys are a truly unique American family, with their highs, lows and drama. But they sacrificed three sons to this country - one in war, two by assassination. They helped shape the civil rights era. Jackie O was a rare, true icon. Please stop enabling Trump's grasping on.

​However, there were those who traced some similarities that were not particularly flattering for Donald Trump.

Well...they both did get cheated on so...there's that. pic.twitter.com/UZfkUopdmc

Does that mean @StormyDaniels is our new Marilyn Monroe???

​Some took a grim tone, hinting at the tragic end of Jackie Kennedy Onassis’ first husband.

trump says melania is the new jackie o and we can only hope that’s true pic.twitter.com/WMeyYUqMNg

​However, others applauded Trump and praised Melania Trump.

I’m sorry, but Melania Trump is better than Jackie O. Don’t @ me.

Melania Trump is her own @FLOTUS and I think Jackie O would be proud!