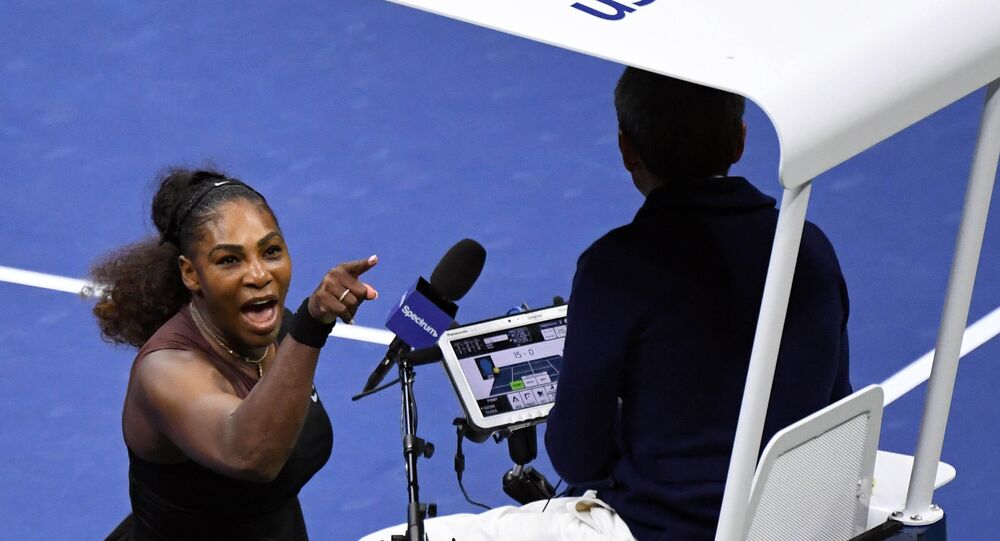 During her US Open final defeat to Japanese tennis player Naomi Osaka, Serena Williams lashed out at the umpire, accusing him of sexism, after receiving three code violations.

US tennis star Serena Williams launched into a fiery rant against chair umpire Carlos Ramos as she called him a “thief” after she was handed multiple code violations while playing against Naomi Osaka in the US Open final.

The umpire gave Williams the first warning for allegedly receiving coaching from her box during the second game of the second set, while she insisted that she had only been given a thumbs-up.

While leading 3-2 in the second set, she received the second warning and was docked a point for smashing her racket in accordance with the International Tennis Federation’s penalty schedule, which stipulates the first code violation is a warning and the second means a point penalty.  The penalty prompted Williams to erupt on court.

I love what Serena did right here! A mom, a queen, a COMPETITOR, and the greatest tennis player ever 🎾🐐 tell em @serenawilliams!!! pic.twitter.com/QEMDCBnyvh

When the umpire didn’t apologize, Serena said: “Well then don’t talk to me. Don’t talk to me,” and that’s when he handed her the third code violation for “verbal abuse.”

US Open officials came onto the court to talk to Williams, who accused the umpire of treating her unfairly because she’s a woman.

Following her 6-2, 6-4 loss to Osaka, Williams held a press conference, where she doubled down on her earlier court rant at the umpire.

“I’ve seen other men call other umpires several things. I’m here fighting for women’s rights and for women’s equality and for all kinds of stuff. For me to say ‘thief’, and for him to take a game, it made me feel like it was a sexist remark. He’s never taken a game from a man because they said ‘thief’.b For me, it blows my mind. But I’m going to continue to fight for women,” she stated.

Williams’ conduct on court has caused mixed reactions on social media, with some saying she was “ridiculous” and stole the thunder from Osaka, who became the first Japanese player to win a Grand Slam singles title:

As much as I am a fan of Serena, what she did was ridiculous.

Shame on Serena. She was coached, she broke a racket and she badgered the umpire. Three violations, two penalties. Serena stole a cleanly earned championship and a once-in-a-lifetime moment from Osaka.

Serena owes Osaka an apology. Showed no respect for the game, the ref or her opponent. She put herself in that position. Take responsibility for your actions. She thinks she's bigger than the game and she's not.

No player, not even Serena, is above the rules of the game. Real shame is that a fine achievement by Naomi Osaka has been overshadowed

Naomi Osaka outplayed Serena Williams from start to finish today, both physically and emotionally. It broke my heart to see her first major tournament win destroyed by Williams’ behavior.

Serena is the thief today for stealing the joy from another young woman.

Some, however, believed that the umpire had indeed showed “sexism at its finest”:

This umpire needs to be taken off his duties plain and simple. Sexism at its finest. Carlos Ramos you should be ashamed. @usta @WTA #usopen

Carlos Ramos is the umpire you have small balls! Taking a point away really I have see men like nick kyrgios scream at Umps so #serena has a very fair point! You wouldn’t have done that to a man you were feeling inferior bc she was calling you out on you bs!

What the ump did was ridiculous.

(2/2) When a woman is emotional, she’s “hysterical” and she’s penalized for it. When a man does the same, he’s “outspoken” & and there are no repercussions. Thank you, @serenawilliams, for calling out this double standard. More voices are needed to do the same. #USOpen2018 pic.twitter.com/mr2UrHBKQK

I am the ex wife of a man who called umpires 10 x worse!! It’s so easy to bully and hate behind your phone!! @serenawilliams will always be the best woman athlete of this generation.

The star of the show has been once again the chair umpire. Second time in this US Open and third time for Serena in a US Open Final. Should they be allowed have an influence on the result of a match? When do we decide that this should never happen again?

Would be nice if some of Serena’s male counterparts had her back and admitted they’ve said a lot worse to the umpire. I know I’ve heard A LOT worse from NBA players directed at refs.

I will admit I have said worse and not gotten penalized. And I’ve also been given a “soft warning” by the ump where they tell you knock it off or I will have to give you a violation. He should have at least given her that courtesy. Sad to mar a well played final that way. https://t.co/xhBzFZX8Wq

Same umpire accused Venus of cheating in 2016 gave her a coaching violation because of it.

So when I say there is racial bias, please stop denying the obvious.

This is disgusting. Serena knew exactly what was happening and fought for the truth. #USOpen
pic.twitter.com/nYt1z70rFl

.@SerenaWilliams, you have changed the world for the better. That’s worth more than a match to me. Congratulations, @Naomi_Osaka_ on your groundbreaking win.

Ok, last reflections in case anyone cares🙄warning for coaching was fair, but everyone coaches and we need to change that rule.. and Carlos should have told or warned SW about the verbal abuse/ rule before he enforced it.. goodnight

Two-time Australia Open champion and two-time US Open runner-up Victoria Azarenka with many others jumped to the defense of the former No 1:

If it was men’s match, this wouldn’t happen like this.
It just wouldn’t

(1/2) Several things went very wrong during the @usopen Women’s Finals today. Coaching on every point should be allowed in tennis. It isn’t, and as a result, a player was penalized for the actions of her coach. This should not happen.

(2/2) When a woman is emotional, she’s “hysterical” and she’s penalized for it. When a man does the same, he’s “outspoken” & and there are no repercussions. Thank you, @serenawilliams, for calling out this double standard. More voices are needed to do the same.

Speaking after her win, Naomi Osaka confessed that she had wanted to be like Serena as a kid, but she “didn’t dream to lose” a US Open final with Williams.

“When I was growing up, I did a whole report on her in third grade. I colored it and everything. I said ‘I want to be like her.’ For me, I’m always going to remember the Serena that I love. It doesn’t change anything for me. She was really nice to me at the net and on the podium. I don’t really see what would change,” Osaka said.

Naomi also said that she was aware that Williams “really wanted to have the 24th Grand Slam” title:

“Everyone knows it. It’s on the commercials, it’s everywhere. When I step onto the court, I feel like a different person, right? I’m not a Serena fan. I’m just a tennis player playing another tennis player. But when I hugged her at the net, I felt like a little kid again.”

Serena putting her arm around Naomi Osaka as the crowd boos is quite a moment. (via ESPN) pic.twitter.com/BjlDH13F1z