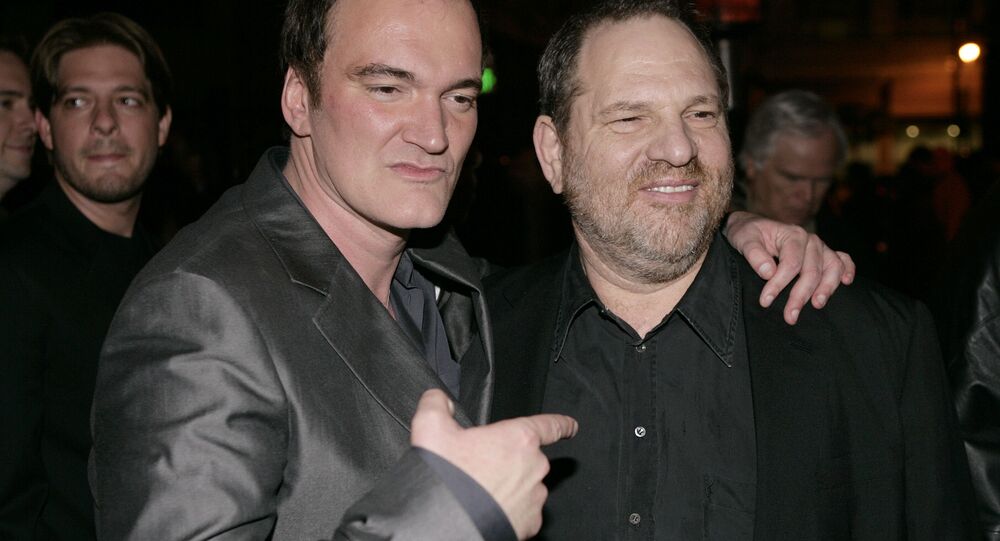 Film director Quentin Tarantino, whose films Pulp Fiction and Inglourious Basterds were executive produced by disgraced film mogul Harvey Weinstein, has admitted that he " knew enough to do more than I did," about Weinstein's alleged sexual harassment of women – he says that many others in Hollywood knew, too.

Legendary film director Quentin Tarantino, who worked with disgraced producer Harvey Weinstein on several movies, says that he was aware that his colleague acted inappropriately toward women and is now "ashamed" that he didn't do anything about it.

Tarantino, who worked with Weinstein on all his movies apart from Death Proof, had faced criticism for staying silent since stories about Weinstein's sexual misconduct became public earlier this month.

I've always greatly admired Quentin Tarantino. Given his deep ties to Weinstein, would really love for him to not be silent right now.

Tarantino's eventual Weinstein rationalisation is going to be longer and more convoluted than the opening scene of Inglorious Basterds.

​In his first public comment on the issue, Tarantino told the New York Times that "There was more to it than just the normal rumors, the normal gossip. It wasn't second hand. I knew he did a couple of these things."

​"I wish I had taken responsibility for what I heard," he continued, adding that "if I had done the work I should have done then, I would have had to not work with him."

I have to say, I wasn't expecting a fairly unequivocating mea culpa from Tarantino, but this is what's needed. https://t.co/LVb1qRqwEa

​His admission was greeted with a mixed reaction on social networks. Some people described Tarantino as "complicit" in Weinstein's alleged crimes, whereas others contrasted his admission with the declarations from other Hollywood stars that they were taken by surprise by the rumors.

Quentin Tarantino knew that Harvey Weinstein was a serial abuser for years & did nothing. His silence makes him complicit.#SpeakUp

Sad & obvious that Quentin Tarantino & other #Weinstein pals are speaking out now to protect their #image & prevent being seen as enablers.😐

I like Tarantino's reaction to Weinstein more than anyone else's. You know why? Because it's honest.

​Tarantino worked with Weinstein on a string of award-winning films, including Reservoir Dogs, Pulp Fiction and Django Unchained. He said that in the 1990's, his then-girlfriend Miro Sorvino told him about her experience with Weinstein, in which the producer allegedly sexually harassed her, including showing up at her apartment uninvited in the middle of the night.

Sorvino was one of a dozen women who made accusations of sexual harassment against Weinstein in the New York Times article, which alleged that Weinstein paid off many of his accusers. Others included the actresses Rosanna Arquette and Rose McGowan.

"I couldn't believe he would do that so openly," Tarantino said, recalling his reaction to what Sorvino had told him.

"I was like: 'Really? Really?' But the thing I thought then, at the time, was that he was particularly hung up on Mira. I thought Harvey was hung up on her in this Svengali kind of way. Because he was infatuated with her, he horribly crossed the line."

His own former girlfriend was sexually harassed by Weinstein and Tarantino didn't say or do anything pic.twitter.com/LBkvoPqjO0

​Tarantino says he knew of another woman to whom Weinstein made unwanted sexual advances in a hotel room, and that he knew a legal settlement had been reached with Rose McGowan.

He now regrets his reaction, which was to "marginalize the incidents. Anything I say now will sound like a crappy excuse."

Weinstein's behavior has been condemned by many famous Hollywood stars since the revelations emerged, including Meryl Streep and George Clooney, who worked with Weinstein,  respectively, on The Queen and From Dusk Till Dawn among others.

When does Meryl Streep admit the same? ⚡️ “Quentin Tarantino admits he 'knew' about Weinstein but kept quiet”https://t.co/VwSR5fxAvb

​However, Tarantino says that Weinstein's behavior was common knowledge among those working with him.

Courtney Love was WARNING about Harvey Weinstein in 2005!

“If Harvey Weinstein invites u to a private party at the Four Seasons, DON’T GO” pic.twitter.com/RK9Vruxy2T

​"Everyone who was close to Harvey had heard of at least one of those incidents. It was impossible they didn't," Tarantino said.

Since the allegations against Weinstein were first published, more women have come forward to allege he sexually harassed them, including Gwyneth Paltrow and Angelina Jolie.

Weinstein's wife has announced their separation and he has been fired from the board of The Weinstein Company. He co-founded the production company with his brother; they also co-founded Miramax in 1979.