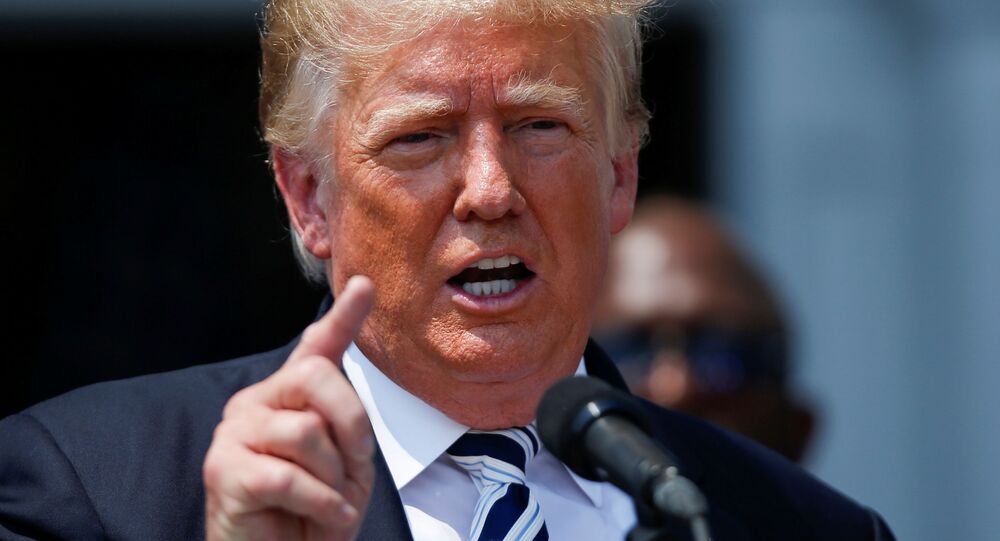 On Wednesday, the ex-commander-in-chief announced a class-action lawsuit against Facebook, Twitter, and Google, as well as their CEOs, over censorship after his accounts were suspended and banned in January this year — when he was the sitting president.

In an op-ed for the Wall Street Journal published on Thursday, former President Donald Trump stated that he is suing Big Tech corporations because they have "teamed up with government to censor the free speech of the American people," warning that “if they can do it to me, they can do it to you."

Trump's lawsuit was filed in the Southern District of Florida's US District Court. The America First Policy Institute, a non-profit dedicated to advocating Trump's policies, is backing the action.

"One of the gravest threats to our democracy today is a powerful group of Big Tech corporations that have teamed up with government to censor the free speech of the American people," the former president wrote. "This is not only wrong—it is unconstitutional. To restore free speech for myself and for every American, I am suing Big Tech to stop it."

When it comes to "censoring and discriminating against ideas, information and people on social media," the former president claimed Big Tech platforms have grown "increasingly brazen and shameless."

Trump pointed out that nowadays Big Tech is not only "removing specific threats of violence," but it is "manipulating and controlling the political debate itself." Companies banning people from their websites, deplatforming organizations, and "aggressively impeding the free flow of information on which our democracy depends," he said.

© AP Photo
This combination of photos shows logos for social media platforms Facebook and Twitter. Shares of social media and other tech companies slid Monday, Jan. 11, 2021 amid fallout the siege on the U.S. Capitol by supporters of President Donald Trump's supporters. (AP Photo/File)

In particular, Trump has criticized social media platforms for banning users who shared posts alluding to the COVID-19 lab-leak theory, and medics who suggested hydroxychloroquine as a possible coronavirus medicine, as well as for censoring an unflattering New York Post piece about President Joe Biden's family, which the Biden campaign "did not even dispute."

© REUTERS / OCTAVIO JONES
Trump Files Lawsuit Against Twitter, Facebook, Google and Their CEOs Zuckerberg, Pichai, Dorsey
Trump has been critical of the fact that thousands of ordinary Americans are censored on social media platforms, while the Iranian leader and government officials as well as the Chinese media, who he calls "propagandists," are operating on these platforms "with impunity."

Trump has also cited the issue of Section 230 of the Communications Decency Act of 1996, which exempts Internet companies from responsibility for content posted on their platforms and which he has consistently opposed, reiterating in his article that such a legal point is used by Democrats from Congress to implement political censorship of opponents.

"In recent years, we have all watched Congress haul Big Tech CEOs before their committees and demand that they censor “false” stories and “disinformation”—labels determined by an army of partisan fact-checkers loyal to the Democrat Party," he stated, adding that Big Tech firms are "doing the government’s bidding, colluding to censor unapproved ideas."

The ex-president pointed out that despite the fact that the US Supreme Court noted that Congress cannot use the services of private actors "to achieve what the Constitution prohibits it from doing itself," in fact, "Big Tech has been illegally deputized as the censorship arm of the US government."

"Through these lawsuits, I intend to restore free speech for all Americans—Democrats, Republicans and independents. I will never stop fighting to defend the constitutional rights and sacred liberties of the American people," Trump said, explaining the motives behind his legal effort.

Can Trump's Lawsuit Make a Difference?

Echoing Trump's endeavor, Mark Meckler, interim CEO of Parler, a company whose app was censored by California giants such as Google and Apple for allegedly being used by rioters during the January 6 events, said he believes this lawsuit "could break new ground" since "the existing law says that the First Amendment protections do not apply in censorship by private companies."

Speaking to Fox News, he noted that "originally the First Amendment was designed to protect freedom of speech in the public sphere", Meckler explained that such a public sphere "literally" meant "standing on a street corner, talking about whatever you want [and] handing out pamphlets."

According to some legal experts cited by The Hill, the suit is nevertheless expected to be dismissed, as private firms are not bound by the First Amendment, which contradicts the complaint's central claim.

In recent months, the former president has stepped up his efforts in calling for boycotts of social media and for restrictions on their arbitrariness about what users are allowed to post. Moreover, many politicians and famous Americans have begun to raise the issue of the excessive power of Big Tech, which uses its algorithms to push potentially high-profile news into the background for the sake of a political agenda.

Trump was banned from Twitter, YouTube, and Facebook along with several other platforms, citing his repeated claims that the presidential election was rigged due to massive irregularities, while the former president was also accused by the social media giants of inciting the violence at the Capitol on January 6.