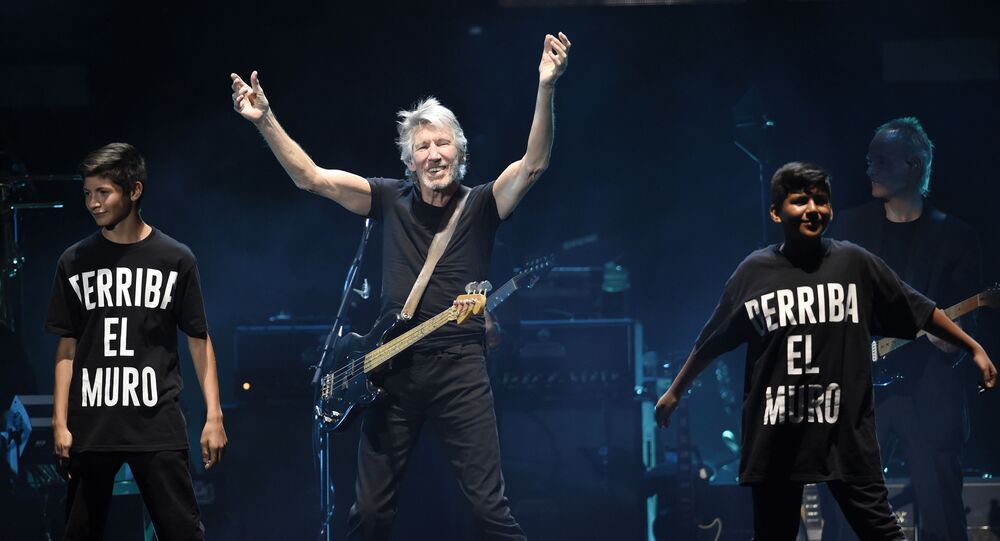 Another Brick in the Wall, written by Waters, was first released in 1979 on Pink Floyd's rock opera "The Wall." Apart from being a protest song against abusive schooling, the piece is often regarded as a countercultural manifesto against the depersonalization of an individual in society.

Pink Floyd co-founder Roger Waters has bluntly denied Facebook founder Mark Zuckerberg's request to obtain the rights to the second part of Another Brick in the Wall for a "huge amount of money" for use in the company's promotional movie, citing the company's censorship policies and its desire for ever greater control in a wide variety of areas.

Speaking at the forum in support of Wikileaks founder Julian Assange, Waters read out a letter from Zuckerberg, which he said he recently received by email.

"It's a request for the rights to use my song, 'Another Brick in the Wall, Pt. 2' in the making of a film to promote Instagram," Waters said. "So it's a missive from Mark Zuckerberg to me - arrived this morning, with an offer of a huge, huge amount of money, and the answer is - f**k you! No f***ing way!"

​The 77-year-old rock legend, who emphasized that he mentioned the letter to demonstrate how the tech giant wanted to "take over absolutely everything," stated that he would not "be a party" to the "bulls**t" proposed by Zuckerberg. In the written request, the company said the song's message was  "still so prevalent and necessary today," which speaks to the timeless nature of Pink Floyd's composition.

"And yet - they want to use it to make Facebook and Instagram even bigger and more powerful than it already is so it can continue to censor all of us in this room and prevent this story about Julian Assange getting out to the general public, so the general public could go, 'What?! What?! No. No more!'" the musician exclaimed.

The legend of rock music hit the founder and CEO of Facebook Zuckerberg particularly hard, dubbing him "one of the most powerful idiots in the world."

"You think, 'How did this little prick, who started off by saying, 'She is pretty, we'll give her a 4 out of 5,' 'She's ugly, we'll give her a 1,' how the f**k did he get any power in anything?" Waters wondered. "And yet here he is, one of the most powerful idiots in the world."

Later, Waters responded to a Twitter post by journalist Peter Cronau that resulted in the singer's rant going viral, as he urged his critics to "call me a hypocrite for posting this on Zuckerberg’s crappy censored platform @Facebook now."

.@petercronau, thank you for paying attention brother. Calling all trolls, come on you pricks, call me a hypocrite for posting this on Zuckerberg’s crappy censored platform @Facebook now. https://t.co/3NYrW7Pw2i

​Facebook and other Big Tech companies are frequently faced with accusations of having excessive power over its users' freedom of expression and speech. In particular, this year's treatment of former US President Trump, who had all of his social media accounts suspended following the January 6 events in Washington, DC, has led many of his supporters as well as others to raise major concerns about freedom of speech and expression in the United States and intensified calls to create alternative communications platforms to prevent censorship.

© REUTERS / JONATHAN DRAKE
More Countries Should Ban Twitter, Facebook Over Free Speech Denial, Trump Says
As for Assange, he was arrested in London on April 11, 2019, and sentenced to 50 weeks in prison for jumping bail in 2012, when he sought refuge inside the Ecuadorean embassy in the UK capital to avoid extradition to Sweden, where he was charged with sexual assault, charges that were later dropped by a Swedish court.

After WikiLeaks published hundreds of secret files and classified information that exposed war crimes committed by US troops in Iraq and Afghanistan, the whistleblower is wanted by the US Justice Department on espionage and computer fraud charges. If convicted in the US, he could face up to 175 years in solitary confinement in a high-security prison.

Another Brick in the Wall, one of the critically praised album's most memorable tracks, was composed of three parts that represented a wall built due to the death of a father, abusive teachers, an overprotective mother, and a mental breakdown. Roger Waters sang lead vocals and played bass guitar, while David Gilmour played guitar and sang harmony vocals, among other things.