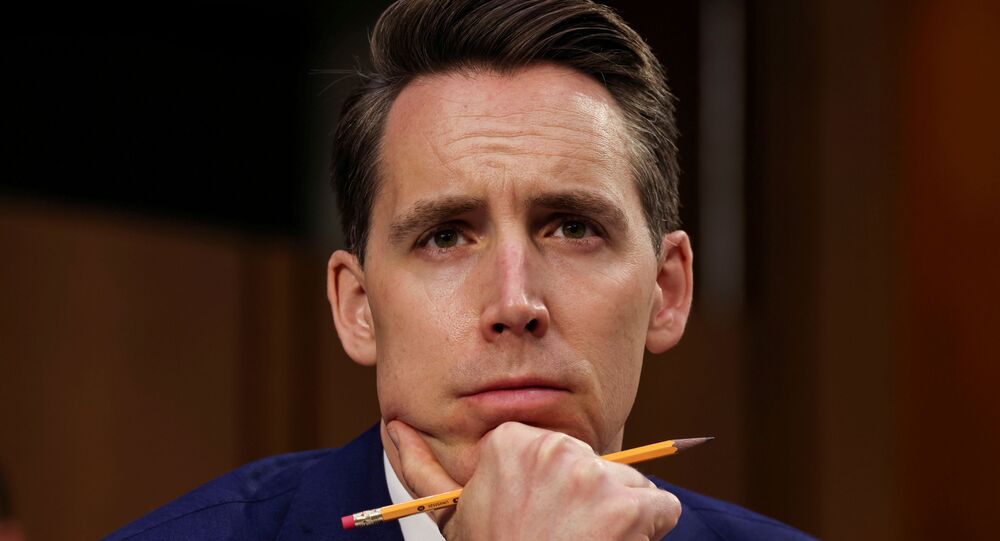 'We Have to Stop Them': Senator Hawley Warns That Big Tech Poses 'Gravest Threat' to US - Report

Over the past months, many lawmakers and media personalities in the US have called for a legislative review to limit what they call "Big Tech sovereignty," implying that social media have unlimited powers to determine what violates their guidelines and what does not.

Republican Senator Josh Hawley of Missouri is warning that Big Tech firms are attempting to "transform America," claiming in a new book that mega-corporations are the "gravest threat" to liberty in decades.

In an interview with Fox News published on Sunday, Hawley characterized his book, "The Tyranny of Big Tech," as one that "corporate press, corporate media, and corporate monopolies" wanted to be "canceled."

"This is a book that corporate leftists don’t want anybody to read, and for good reason," Hawley is quoted in the report as saying. "This is all about how big tech and mega corporations are working hand-in-hand with big government to try to run our country, silence our speech, and take over our government."

"And we have to stop them," the senator emphasized.

Simon & Schuster had been scheduled to publish the novel, which is ultimately expected to appear in stores on May 4, but after Hawley and other Republicans objected to certifying the Electoral College votes in some swing states in the 2020 presidential election, the company dropped him as a client following the notorious Capitol riot on January 6.

"The irony is, the book is about the control Big Tech has over our politics, and over our society, and it was Big Tech that led the effort to get this canceled," the senator said about the matter.

Hawley figured that it was apparently a petition drive "that started on Twitter – certainly was amplified by Twitter, that caused the corporate publisher to say we ought to back away from this." He also stressed that he is "grateful there are still independent publishers," referring to Regnery Publishing, with whom he eventually signed.

Since assuming office, Hawley has been a strong opponent of Big Tech and social media corporations, warning that they are "so ubiquitous, so powerful, and they are more powerful by the day."

Thus, Big Tech "interfered big time" in the 2020 presidential election, according to Hawley, referring to Twitter and Facebook restricting the dissemination of news about Hunter Biden's foreign business activities and suspending the accounts of journalists and the New York Post when they attempted to share those reports.

"These are folks that want to try to impose their agenda – and it is a leftist, woke agenda – on the country," Hawley said, arguing that social media giants "want to tell people what you can post, want to control the news, control what people read and what journalism looks like."

Hawley noted that the purpose of such actions is "really about information control."

© REUTERS / Johanna Geron
The Facebook logo is seen on a screen in this picture illustration taken December 2, 2019.

One solution, according to Hawley, is to "break companies up," and he stressed that Republicans should lead the charge. The senator introduced the "Bust Up Big Tech Act" in mid-April, which sought to prohibit corporations that own marketplaces or search engines from owning web hosting services.

"Facebook currently owns Facebook, but also Instagram, and they also want to have their own currency, or something like it," Hawley said. "Google owns not just Google search, but Gmail, and all of these other products, and cloud computing services, and they own YouTube.

The bill, for instance, is aimed at preventing Amazon from selling its own-branded goods on Amazon Marketplace, where its rivals do business as well. The legislation also prohibits Amazon from controlling a significant portion of the cloud storage resources that many online businesses rely on while continuing to operate its omnipresent retail business.

"One company should not be allowed to have all of these different platforms," Hawley continued, referring to Amazon businesses in particular.

The bill also empowers the Federal Trade Commission to oversee compliance with the legislation and allows state attorneys general and private individuals to sue tech firms if they think they are breaking the law.

The senator slammed Facebook and Twitter yet again, claiming that they "take our data and personal information without our consent or knowledge, and then they try to use it to control what we see, sell stuff to us, and are constantly using artificial intelligence to push stories at us to get us to click on this, buy that, read that."