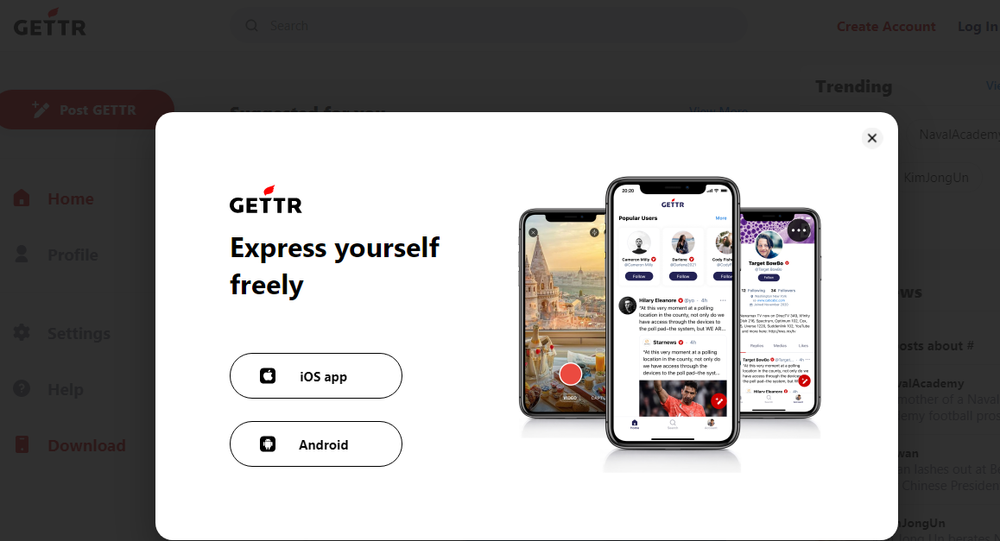 Since his ouster from mainstream social media including Twitter and Facebook, ex-US President Donald Trump has been blustering that he will soon offer an alternative to "biased" Big Tech platforms. His efforts, such as a blog 'From the Desk of Donald Trump', have not been impressive, but perhaps that is about to change?

Trump's team on Thursday introduced a new social media platform called "Gettr", dubbed 'The Marketplace of Ideas' and is apparently a promised alternative to mainstream platforms offered by Big Tech, including Twitter, Facebook, Instagram, and others.

The stated mission of Gettr, as the company puts it, is “fighting cancel culture, promoting common sense, defending free speech, challenging social media monopolies, and creating a true marketplace of ideas.” The platform will be run by a former Trump spokesman, Jason Miller, who also announced that the platform will launch officially on 4 July.

​The interface of Gettr looks similar to Twitter, but colored in largely white and red, rather than white and blue. Users can reportedly share posts, like, comment, or reply. As of Thursday, topics such as "heatwave", "KimJongUn", "Taiwan" and "COVID" were seen to be trending.

The former president has not commented on the launch of the platform, nor does he currently appear to have a verified account. It is unclear how he is connected to the project.

This is not the first attempt by Trump's office to come up with an alternative to Big Tech social media platforms, which, conservatives claim, "silences" them and uses "shadow-banning" against them.

Trump became one of those most unwelcome on mainstream platforms, suspended from Twitter and Facebook after being accused of inciting the deadly 6 January Capitol riot. After being ousted from every major social media platform, the former president pledged to offer an alternative. So far, he rolled out a website named 'From the Desk of Donald J. Trump, which had few engagement opportunities and was criticized for being more of a blog than a social media platform.

Online for less than a month, the blog shut down in early June.