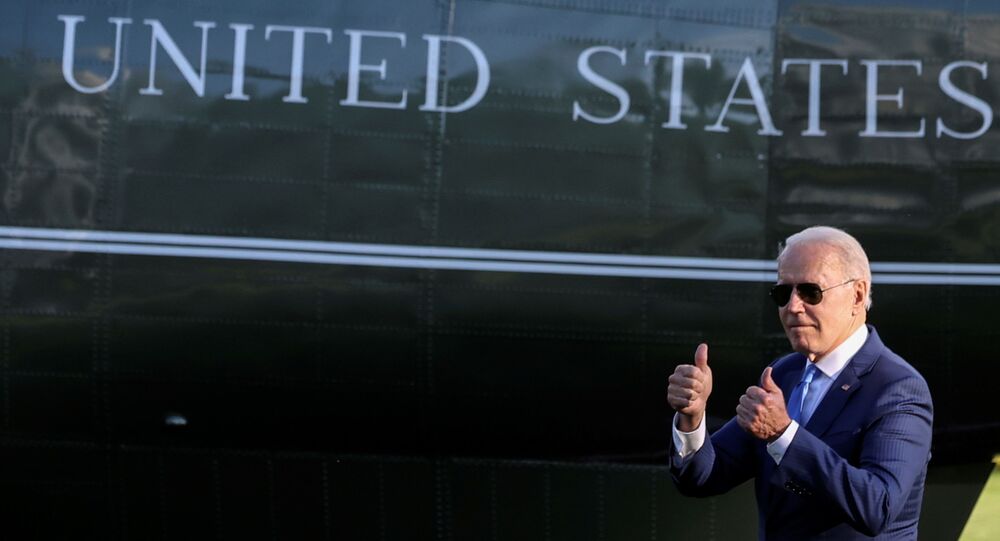 POTUS was elected among other things on his promise to "heal" the country torn apart by political divisions. But can he deliver on that promise as Republicans continue to oppose some of his progressive proposals and progressives in his own party demand he leave unyielding GOP lawmakers behind?

US President Joe Biden has found himself between a rock and a hard place over his plans to pass both an ambitious $1.2 trillion infrastructure plan and a reconciliation package, which could cost the US budget as much as $4 trillion, according to some estimates. The political quagmire he recently found himself in emerged after he initially threatened that he would not sign one package if the other doesn't pass Congress, and then backtracked on his statement.

The situation is even more complicated for Biden, who promised to "heal" the country, riddled by extreme political divisions over the last few years, both among ordinary Americans and in the halls of Congress. What are the chances Biden will find a way of out this "trap", while still keeping his promise of being the "president for all Americans"?

It started even before Joe Biden presented his ambitious infrastructure plan, designed to not only repair roads and bridges, but also to boost certain social safety nets at the expense of higher taxes. After POTUS and the Democratic Party pushed their $1.9 trillion COVID relief through Congress, ignoring protests by the GOP, Biden first faced accusations of hypocrisy over failing to negotiate a bill that would satisfy both parties.

At the time, the Democratic president defended such an approach by the urgency of the matter at hand – the new relief bill was signed just days before the funding for benefits under previous legislation expired. However, this trick won't work a second time with the infrastructure plan, which isn't as urgent. Besides, Biden himself stressed that it was important for him that his ambitious initiative receive increased legitimacy in the form of bipartisan support.

"I have already shown, in my young presidency, that I am prepared to do whatever needs to get done to move the country forward. […] When we can find common ground, though, working across party lines, that is what I will seek to do. The reason why is because the broader support a proposal has in Congress, the stronger its prospects for passage", Biden said on 24 June.

And at some point, Biden started to get what he asked for: a bipartisan group of senators managed to preliminarily negotiate the $1.2 trillion infrastructure plan for the next 8 years. This plan includes federal investments in roads, bridges, and waterways. Yet, what it does not include is the "human" part of the president's plan, which may cost the nation's budget up to $4 trillion, with Biden threatening not to sign one part of the larger infrastructure initiative into law if the other doesn't hit his desk. The problem is that Republicans strongly oppose the $4 trillion "reconciliation package" for what they see as its exorbitant spending, which Democrats propose to pay for by tax hikes.

Backtracking on Threats and Facing Pressure From His Own Party

Biden's perceived threat to block the hard-won, bipartisan deal was met with backlash from Republicans, who accused POTUS of trying to "extort" them to push the "reconciliation package" through Congress without negotiating it with the GOP. Some Republicans even threatened to withdraw their support for the infrastructure plan if that's the case.

The $4 trillion reconciliation deal contains most of Biden's "progressive" promises to his voters – creating new jobs under the American Jobs Plan, fighting poverty under the American Families Plan, clean energy, and climate change initiatives. It also proposes pumping over $36 billion to promote education equality in schools, spending $10 billion on fighting the opioid pandemic, and allocating $30 billion more to provide housing assistance to the homeless and those fleeing domestic violence.

Another reason why it is important for Biden to pass the reconciliation package in tandem with the infrastructure deal is that otherwise the latter might lose the support of the progressive wing of the Democratic Party. Progressives warned POTUS they might abandon the infrastructure bill due to it missing the things they deem important. And although Biden rebuked them over such statements, he still needs their support to push both initiatives through Congress, especially the evenly divided Senate.

can Biden Pass Reconciliation Deal and Uphold Bipartisanship at the Same Time?

And so Biden found himself in a bit of a pickle, securing shaky bipartisan consensus on the $1.2 trillion infrastructure deal, but only having the support of Democrats for the rest of his ambitious plan. Progressive Democrats indicated that POTUS can move forward with the latter by leaving the GOP senators behind.

Unlike with the infrastructure deal, the Democrats can in theory push the $4 trillion package through the evenly divided US Senate even without the need for breaking the filibuster that requires 60 votes. The budget reconciliation process allows passing a bill with a simple majority if it relates to budget issues and does not create a long-term deficit. Should all Democrats be on board with such a bill, the tie-breaking vote of Vice President Kamala Harris will allow the party to pass the reconciliation plan without GOP support, as was the case with the last COVID relief package.

Yet, this approach is fraught with certain risks and consequences. First, it might sabotage the Democrats' $1.2 trillion infrastructure deal with the Republican Party. The GOP strongly criticised their political opponents when they pushed their COVID relief plan through without negotiating it with the Republicans in March, and will likely withdraw their support from the infrastructure deal to protest another such attempt.

Second, leaving Republicans behind on the reconciliation deal would empower Biden's critics to claim he violated his promise of upholding the spirit of bipartisanship in Congress and becoming the "president for all Americans". Apparently, POTUS wants to avoid that. In a 24 June speech, Biden hailed the freshly reached deal for infrastructure projects as a reminder of the days when "we used to get an awful lot done in the US Congress" and stressed that "bipartisan deal means compromise".

© Sputnik
Biden's New Infrastructure Bill: Bipartisan Heaven or a Shriveled Shadow of Its Former Self?

At the same time, it will be difficult for POTUS to make the second part of his infrastructure initiative lucrative or even acceptable for the GOP. The ambitious plan requires significant funding, which means either a growing budget deficit or tax hikes. Neither is acceptable for the Republicans at the moment. Another alternative is to tone down the programmes proposed by Biden and the Democrats under the reconciliation package, which, in turn, means that POTUS might lose the votes of the progressive wing of the party. Finding the balance between the aspirations of both parties might thus prove extremely tricky, meaning that Biden might not manage to kill two birds with one stone – pass the infrastructure plan and preserve bipartisanship in Congress.