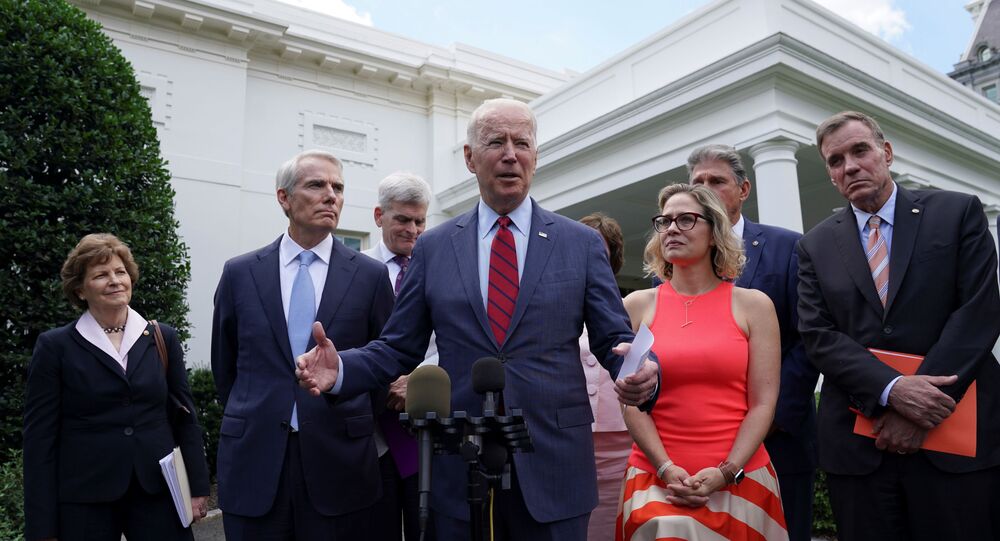 US lawmakers had been working for weeks on how best to map out a roughly $1 trillion infrastructure package that would clear both congressional chambers without any hiccups. However, the biggest challenge was deciding how the plan would be paid, as Republicans stood firm against allowing changes to the Trump administration’s 2017 tax overhaul.

US President Joe Biden declared on Thursday that an infrastructure deal was struck with a bipartisan group of senators who held talks for several weeks on the administration’s push to improve the nation’s roads and power supplies.

"To answer the direct question, we have a deal," Biden said from the White House driveway. "We have made serious compromises on both ends."

Flanked by the bipartisan team of senators, including Sens. Mitt Romney (R-UT) and Mark Warner (D-VA), the president highlighted that the proposed agreement will be focusing on “hard” infrastructure.

“They have my word. I’ll stick with what they’ve proposed, and they’ve given me their word as well,” Biden continued. “None of us got all that we wanted. I didn’t get all that I wanted. But this reminds me of the days we used to get an awful lot done up in the United States Congress.”

Biden also took the opportunity to note that the “human infrastructure,” such as social programs and investments in child care and education, would be addressed as part of a “dual track” effort moving forward. Said effort would likely be put through Congress in a future bill using the fast-track budget reconciliation process, a procedural mechanism that would bypass the need for Republican votes in the Senate.

An earlier framework that the same group of lawmakers were in agreement with included $974 billion in spending over a five-year period. However, of those funds, only $579 billion was outlined for new projects and initiatives.

Although details of the new compromise are slim and have yet to be fully finalized, the package is expected to include revenue increases that will neither raise taxes on the middle class nor reverse business tax cuts that were cleared by former US President Donald Trump in 2017.

Wednesday also saw Senate Majority Leader Chuck Schumer (D-NY) and House Speaker Nancy Pelosi (D-NY) meet with Biden to discuss the deal. It was previously reported that the pair are in full support of the infrastructure plan so long as Democrats are able to pursue the reconciliation package, as some lawmakers including Sen. Bernie Sanders (I-VT) are uncertain about backing a slimmed-down infrastructure bill.

As for Senate Minority Leader Mitch McConnell (R-KY), he has yet to officially sign off on the agreement. To date, 21 US senators, composed of 10 Democrats and 11 Republicans, have backed the infrastructure framework.