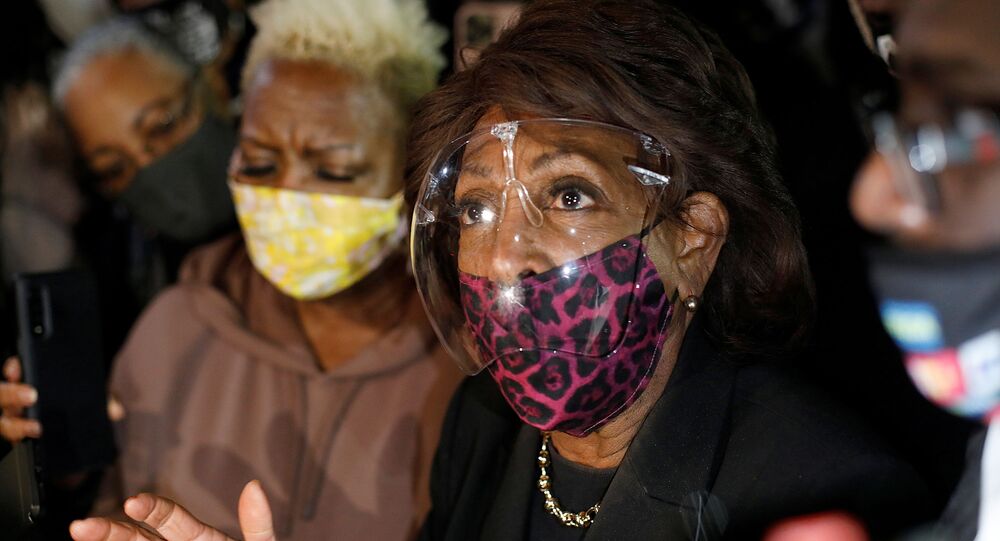 Rep. Maxine Waters, D-Calif., earlier came under fire for remarks during a visit to Brooklyn Center, near Minneapolis, on Saturday, as she urged protesters to “get more confrontational”, as tensions run high in the area where Daunte Wright was shot as the trial of Derek Chauvin, accused of murdering black man George Floyd, nears its culmination.

"I believe it rises to that level because Maxine Waters believes there is value in violence,” said McCarthy, speaking to host Ben Domenech on "Fox News Primetime".

​McCarthy said he believes there are 'probably 10 to 15' Democrats who would vote for censure.

“It will all come down to the pressure of what Democrats will put on them to just try to vote to table it - not even to have the discussion,” he added.

Amid intensifying protests near Brooklyn Center police headquarters in Minneapolis, Minnesota, over the fatal police-involved shooting of a local black man, 20-year-old Daunte Wright, Rep. Maxine Waters joined the demonstrators on Saturday and urged them to "stay in the street".

As the city is braced to hear the verdict in the case of former police officer Derek Chauvin, charged with murdering another black man, George Floyd, on 25 May, Waters voiced hope for a guilty verdict, adding:

As the Democrat urged the protesters to “get more active”, she said:

“…We’ve got to get more confrontational. We’ve got to make sure that they know that we mean business.”

Just hours after the remarks by the Congresswoman, early on Sunday, two members of the National Guard sustained non-life threatening injuries in a drive-by shooting.

The comments by the Democratic Congresswoman were brought up by Judge Peter Cahill during Chauvin’s trial. The former Minneapolis police officer’s defence team denounced them as "threatening acts of violence."

The Judge presiding over the trial, which has since heard the closing arguments in the case, also called out Waters for “confrontational' comments.

"I'll give you that Congresswoman Waters may have given you something on appeal that may result on this whole trial being overturned," Hennepin County District Judge Peter Cahill said.

"This goes back to what I've been saying from the beginning… I wish elected officials would stop talking about this case, especially in a manner that is disrespectful to the rule of law and to the judicial branch and our function, added the judge.

.@MaxineWaters has a long history of inciting unrest and supporting dictators who use violence to get what they want.

She was friends with the murderous tyrant, Fidel Castro, and this is a direct page out of Fidel’s playbook! https://t.co/HTlLC25j4A

“And now what she has said has even put doubt into a jury. You had a judge announce that it was wrong.”

The House GOP leader emphasised action, in his opinion, was called for, especially when Waters had a “pattern of this behaviour".

McCarthy was referring to the politician’s words addressing a crowd in California in 2018.

At the time, the lawmaker she urged supporters to “create a crowd” whenever they recognise Donald Trump supporters and “tell them they’re not welcome anymore”.

Maxine Waters urges harassment of Trump admin: "If you see anybody from that Cabinet in a restaurant, in a department store, at a gas station, you get out & you create a crowd & you push back on them, & you tell them they’re not welcome anymore, anywhere."pic.twitter.com/jMV7wk48wM

“I will go and take Trump out tonight,” Waters also said in 2017, addressing an LGBT group gala in New York.

Waters later dismissed her comments, telling CNN that it is "absolutely ridiculous" for people to think "a grandmother who is a congresswoman... for all of these years would be talking about doing any harm".

‘Trying to Incite a Riot’

The recent comments by Rep. Maxine Waters have triggered a furious backlash from conservatives.

Rep. Lauren Boebert (R-Colo.) accused her of “traveling to a different state trying to incite a riot.”

Pelosi and the Democrats won’t condemn violent rioters because they’ve been supporting them all along. https://t.co/XaImc2CIE6

​Rep. Lee Zeldin (R-N.Y.) said Waters should be “immediately removed from Congress” for her “dangerous and toxic incitement to violence”.

“If Speaker Pelosi doesn’t act against this dangerous rhetoric, I will bring action this week.”

However, US House Speaker Nancy Pelosi (D-CA) defended Waters on Monday, insisting that the California lawmaker had no need to apologise for her weekend remarks.

When asked by reporters if the statements could, indeed, be interpreted as inciting violence, Pelosi replied, “No, absolutely not.”

The developments come after six hours of closing arguments and rebuttal on Monday heard in Minneapolis, Minnesota, in the judicial process over Derek Chauvin, a former police officer accused of killing George Floyd.

The second-degree unintentional murder, third-degree murder and second-degree manslaughter case against Chauvin is now with the jury for deliberations.

On 25 May 2020, then-police officer Chauvin kneeled on the neck of George Floyd for over eight minutes during an arrest, despite the latter's pleas he could not breathe, resulting in the African American man’s death.