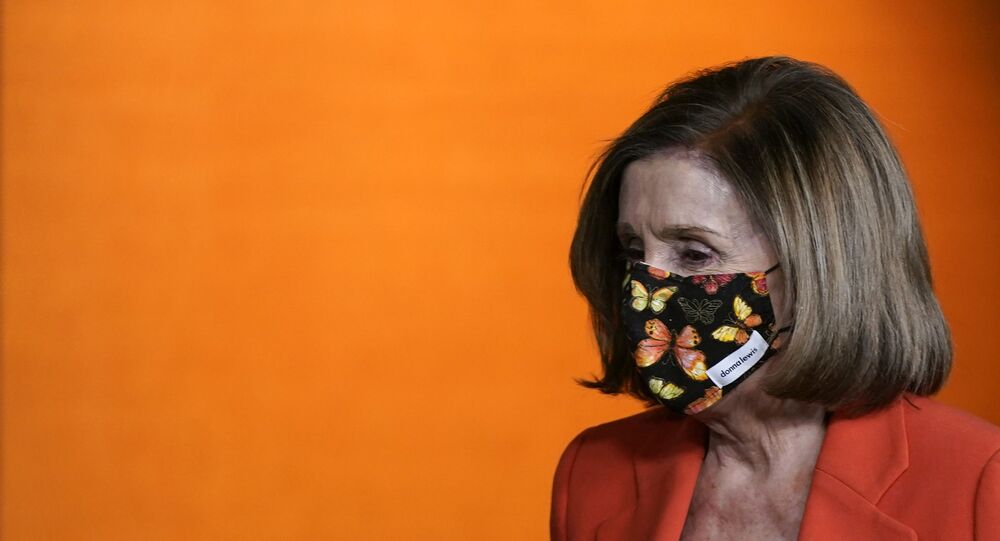 This past weekend marked one week since the police-involved killing of 20-year-old Daunte Wright. Since April 11, protesters have gathered outside of the Brooklyn Center police headquarters in Minneapolis, Minnesota, including Rep. Maxine Waters (D-CA), who told protesters to be “more confrontational” and let officials know “we mean business.”

US House Speaker Nancy Pelosi (D-CA) came to Waters’ defense on Monday and insisted that the California lawmaker need not apologize over her weekend remarks, after Republican officials claimed that she was inciting violence.

When questioned by reporters about the remarks from Waters and asked if it could incite violence, Pelosi replied, “No, absolutely not,” and drew parallels between Waters’ calls for confrontation and the civil rights movement.

"Maxine talked about confrontation in the manner of the civil rights movement," Pelosi said, adding, "I myself think we should take our lead from the George Floyd family. They've handled this with great dignity and no ambiguity or lack of - misinterpretation by the other side. No, I don't think she should apologize."

Additionally, Pelosi pinpointed Rep. Lisa McClain (R-MI) as the one who owed an apology after the congresswoman blasted Waters at a Monday congressional hearing.

During her floor speech, McClain called out a double standard in how the House of Representatives was dealing with comments that allegedly incite violence, targeting Waters for her Sunday remarks, saying that a Republican would have been expelled from Congress had the situation been reversed.

"Once again, this weekend, we saw a member of the majority openly call for more confrontation in a Minneapolis suburb," McClain said during her floor speech. "That very night, there was a drive-by shooting in that community where police and the National Guardsmen were targeted. If this were reversed, if this was said by a Republican, you know that the majority in this chamber would move to strip that representative of their committees, and possibly to expel them from Congress.”

Earlier, House Minority Leader Kevin McCarthy (R-CA) also accused Waters of condoning political violence. Waters replied to the Republicans’ criticism, saying she’s “nonviolent,” and that Republicans were trying to “send a message” to white supremacists in their move to criticize her.

“Republicans will jump on any word, any line and try to make it fit their message and their cause for denouncing us and denying us, basically calling us violent ... any time they see an opportunity to seize on a word, so they do it and they send a message to all of the white supremacists, the KKK, the Oath Keepers, the [Proud] Boys and all of that, how this is a time for [Republicans] to raise money on [Democrats'] backs," Waters said to The Grio on Monday, adding that she will “not be bullied” by members of the GOP.

The backlash over Waters’ remarks comes as jurors have begun deliberating in the murder trial of former Minneapolis Police Officer Derek Chauvin, who has been charged with murder and manslaughter charges over the May 2020 death of Floyd.

While attending a protest in Minneapolis, Waters claimed that if Chauvin is not found guilty, she and others are “going to fight with all of the people who stand for justice,” hinting at an escalation in demonstrations if the trial does not end with a conviction. McCarthy responded to this by telling Pelosi to act against the “dangerous rhetoric.”

Eric Nelson, Chauvin’s defense lawyer, cited Waters’ comments moments before a recess was called amid jury deliberations in a renewed bid to push for a mistrial. While Hennepin County District Judge Peter Cahill, who is overseeing the trial, rejected Nelson’s request, he did state that Waters’ statements could lead to the case being overturned on appeal.

“I wish elected officials would stop talking about this case, especially in a manner that is disrespectful to the rule of law,” Cahill told the courtroom. “Their failure to do so is abhorrent.”

Earlier, Rep. Marjorie Taylor Greene (R-GA), announced plans to introduce a resolution to expel Waters from Congress over her commentary.

So far, protests have continued nationally in anticipation of the jury’s verdict. Demonstrations have also been held for several other police-involved shootings, such as the Chicago shooting that killed 13-year-old Adam Toledo.