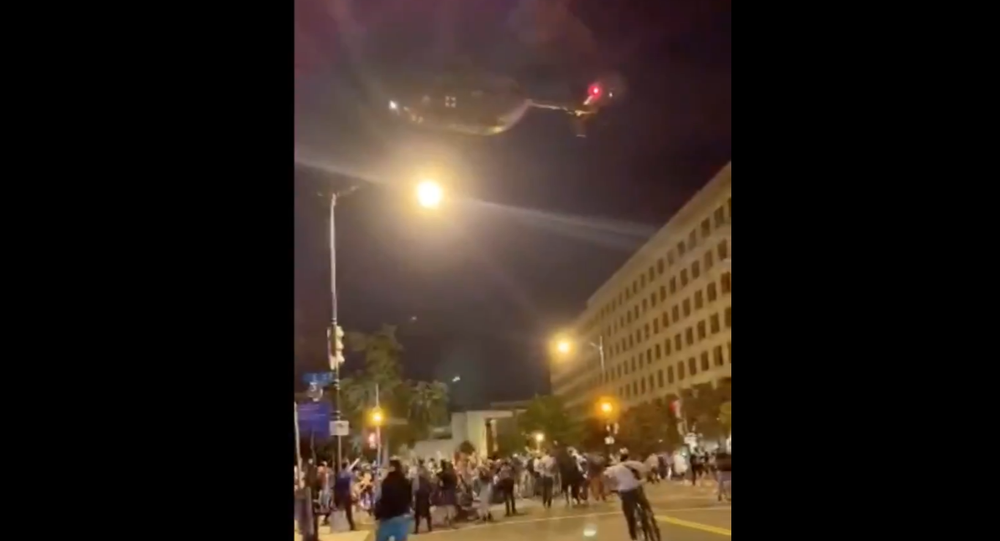 As the Black Lives Matter protests swelled last summer into the largest conflagration seen in the US in half a century, US President Donald Trump fought with Pentagon leaders about declaring martial law. While they have claimed to have ordered the National Guard to be harsher, tracing who gave them orders to do what has remained a challenge.

A probe of events in Washington, DC, during the protests of May and June 2020 passes the blame for low-level helicopter flights over demonstrators off onto lower commanders and chopper pilots themselves, who “modified” their vaguely-worded orders.

At the height of the nationwide protests over the killing of George Floyd and other Black Americans by US police in May and June of 2020, thousands of national guard troops were deployed to Washington, DC, a major hotspot for demonstrations. On the evening of June 1, thousands of protesters were driven from the streets beginning with a violent assault by police outside the White House, which cleared the way for then-US President Donald Trump to pose for a photo-op in front of a local church.

In the hours that followed, police and soldiers used a number of controversial tactics to enforce the curfew, but that which attracted the most attention was the “buzzing” of protesters by several National Guard helicopters - a tactic used by US troops abroad to intimidate crowds and enemy combatants during their occupation wars in Iraq and Afghanistan.

According to a redacted report on the incident published Wednesday by the DC National Guard, a mixture of confusion and initiative by pilots and low-level officers led to a “breakdown of command and control,” with the commanding officer claiming he didn’t know he couldn’t deploy medical helicopters on non-medical missions without prior authorization.

​The report notes that five National Guard helicopters hit the skies that night, four of which were medevac vehicles, which wasn’t against the law but was against procedure. Three were UH-60 Black Hawks and two were UH-72 Lakotas. One Lakota “hovered under 100 feet” over a group of protesters near Judiciary Square to “provide that constant obvious presence as hopefully a deterrent,” as one guardsman told the investigators. However, a Washington Post reporter managed to squeeze a more precise answer of just 55 feet altitude out of an Army figure who asked to remain anonymous.

According to eyewitnesses, the rotor wash whipped objects across the streets, snapped tree limbs, and knocked people over.

Interestingly, the report notes that first a UH-60 arrived at the Judiciary Square location, but feared going lower due to rotor wash, and so called the UH-72 over to “get a better look at things.”

How this came about is unclear. One the one hand, mission commander Brig. Gen. Robert K. Ryan referred to the June 1 deployment as “D-Day for the National Guard,” comparing it to the beginning of combat operations. An operations officer told the investigators this “perhaps framed the mission from there on.”

In describing his mission to the investigators, Ryan said he was given “shocking” orders by senior Pentagon leadership: to “flood the box with everything we have,” referring to downtown Washington, DC.

“You deploy the DC National Guard by all means necessary, armed, out in support of civil authority in the District of Columbia ... we had to include massive presence and … so we executed,” Ryan recalled his orders being. He further noted that Gen. James McConville swore that “the White House will not burn while I am Chief of Staff of the Army.”

“While the exact words are difficult to recall, I remember a clear sense of urgency to launch the aircraft quickly and a request for a ‘show of force,’ apparently from the highest levels of DC Guard and Army leadership,” Ryan added.

On the other hand, the report says Ryan never directed the helicopters to scatter protesters. In fact it says they found “no evidence” that senior leadership ever discussed helicopters that night. It attributes the pilots’ subsequent actions to an unidentified subordinate who “modified” the general’s orders.

​In a section on how the State Army Aviation Officer and TF-Aviation Commander understood the mission, one guardsman whose name is redacted told the investigators Ryan had told them “I need you to assist our special agencies and I need you to orbit around the crowds to disperse any type of looting, mayhem, whatsoever.” Another said the scope was to “establish an aerial dominance.” A third said they were to “be loud … fly low over the crowds.”

This differs somewhat from what the New York Times reported later in June, which was that orders to perform the so-called “persistent presence” maneuver came from the Pentagon. According to the paper, Senior Pentagon officials ordered the maneuver in an attempt to prove the National Guard could handle the situation and thus dissuade Trump from deploying active-duty troops from the US 82nd Airborne Division, recently repositioned outside the city from their Georgia home base. Doing so would require invoking the Insurrection Act, which Trump had threatened to do in a Rose Garden speech earlier that day that immediately preceded the violent clearing of Lafayette Park.

While the report says several soldiers received “administrative discipline,” it did not specify their name or rank. It did say that aircrews acted in “good faith” and followed orders as they understood them.

The shadow of the incident has hung large over the DC National Guard. Human Rights Watch, a nongovernmental organization that typically directs its ire at US enemies, found the event so egregious as to denounce it as an “excessive use of force prohibited by international human rights law.”

In the lead up to the deadly insurrection by supporters of then-US President Donald Trump at the US Capitol six months later, the DC commander found himself hamstrung and unable to properly respond for fear of a repeat of the June 1 public relations disaster.

Maj. Gen. William J. Walker, then commander of the DC National Guard, told the Washington Post in late January that the Pentagon deprived him of even the ability to deploy a small group of emergency troops without submitting to McCarthy a formal “concept of operation” request that by definition precludes the possibility of an emergency deployment.

As a result, when thousands of Trump supporters fell upon the US Capitol Police on the West Terrace of the US Capitol that afternoon, it took the National Guard several hours to respond, and the rioters penetrated the building and temporarily dispersed Congress. However, as Sputnik has reported, there were several Capitol Police officers who sympathized with the crowd enough to remove barricades, open doors, and even give them directions once inside.