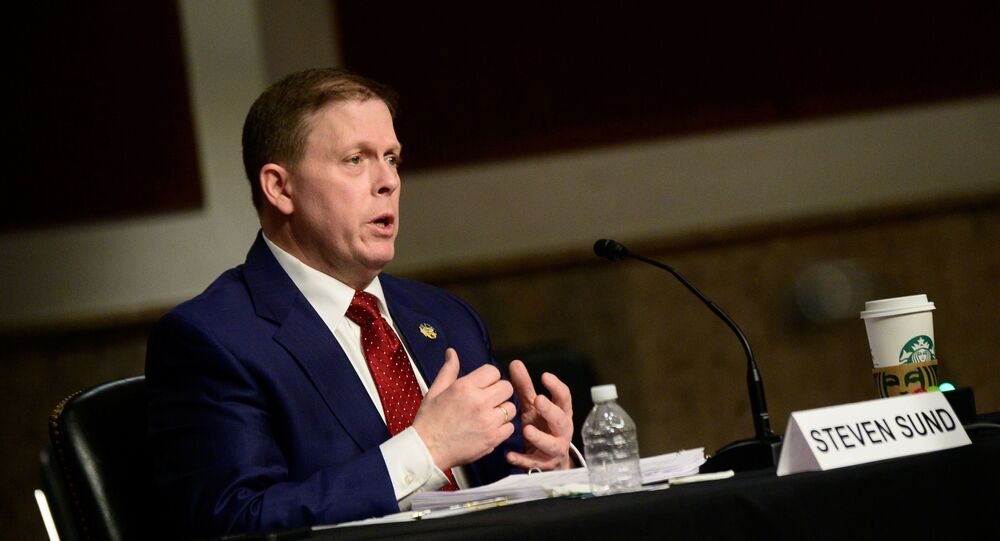 Despite his far-reaching testimony about the police force’s response to the January 6 insurrection, Steven Sund, the since-resigned chief of US Capitol Police (USCP), questions remain about the extent to which his own officers cooperated with the crowd in breaching the legislature.

Sund, who was chief during the January 6 insurrection by supporters of then-US President Donald Trump, told Congress during a public hearing on Tuesday that he never received a key FBI intelligence report about the violent intentions of members of the crowd.

“That information would have been helpful,'' Sund told a joint investigation by the Senate Homeland Security and Governmental Affairs Committee and the Senate Rules Committee on Tuesday.

Sund said he only learned after the attack that the FBI’s field office in Norfolk, Virginia, had predicted the crowd of Trump supporters would commit “war” during their huge rally in Washington, DC, on January 6.

Prior to the riot, thousands of participants had attended a rally in front of the White House hosted by Trump that aimed to “Stop the Steal,” furthering Trump’s claims that his loss in the November 2020 presidential election was due to fraud.

At the rally, Trump urged his followers to march to the Capitol and “fight like hell,” promising he would join them in convincing Congress to halt its certification of the election results, a process already underway. While Trump didn’t accompany them, some 8,000 people quickly descended on the Capitol and overwhelmed parts of the police line.

“When the group arrived at the perimeter, they did not act like any group of protestors I had ever seen," Sund told lawmakers. He resigned the day after the attack. “No single civilian law enforcement agency - and certainly not the USCP - is trained and equipped to repel, without significant military or other law enforcement assistance, an insurrection of thousands of armed, violent, and coordinated individuals focused on breaching a building at all costs,'' Sund said.

Indeed, among those who stormed the legislature were many radical elements, including neo-Nazis, “Three Percenter” and "Oath Keeper" militia members, as well as former and currently serving members of the US military, who were seen deploying military tactics such as the “Ranger file,” a technique used by US Special Forces as they prepare to breach a building, along with other militant tactics.

Sund also sought help from the National Guard a total of six times before and after the insurrection. However, he told lawmakers Tuesday that in the days prior, then-House Sergeant-at-Arms Paul Irving was concerned about the “optics” of soldiers outside the Capitol and referred him to then-Senate Sergeant at Arms Michael Stenger, who similarly refused the request. However, Stenger advised Irving to seek information about how quickly guardsmen could be deployed if requested. Both figures denied Sund had made the requests during their Tuesday testimony; they have both since resigned.

However, over at the Pentagon, even more gum was being placed in the works. Maj. Gen. William J. Walker, the commanding general of the District of Columbia National Guard, told the Washington Post that he was required to seek a “concept of operation” approval before even a tiny number of guardsmen would be dispatched - a standard that effectively guaranteed an emergency deployment would be impossible.

The reason for this, Pentagon officials told the Post, was again a question of optics. One Trump appointee at the Pentagon told the paper the military had “learned its lesson” from the disastrous way the June 2020 Black Lives Matter protests were crushed by the guard and would be “absolutely nowhere near the Capitol building” because “we don’t want to send the wrong message.”

When Walker began receiving Sund’s urgent pleas, the first of which came at just 1:09 pm on the 6th, he immediately relayed them to the Pentagon, which delayed for 75 minutes, only approving the request at 3:04 p.m. However, the troops only arrived more than two hours later, after the insurrectionists had breached the Capitol, dispersed Congress, killed a USCP officer, built a gallows outside, looted the building, and been driven out by USCP.

Sund’s written testimony did not cover a vital aspect of the insurrection, which the corporate media has likewise been wont to ignore in its framing of the event: potential collusion between Capitol Police officers and the rioters.

As Sputnik reported while the event was still unfolding, several videos filmed and posted on social media at the Capitol appear to show USCP officers fraternizing and even helping the Trump supporters to enter the building.

One scene shows a man snapping a selfie with an officer; another shows officers pulling away barricades as the crowds rush past them; a third shows the narrow doors on the West Terrace being thrown open as officers stand aside, limply telling the rioters they aren’t supposed to enter the building.

In another video, a USCP officer wearing Trump’s trademark red “Make America Great Again” ballcap coordinates with several rioters outside, who escort him into the building. He is seen a few minutes later leading a group of nearly a dozen riot gear-clad officers out of the building, through the throngs of people attempting to storm it.

However, at other points along the line, USCP officers and those from the DC Metropolitan Police Department who joined them engaged in physical combat with the rioters before deploying both pepper spray and tear gas in order to clear the area.

In the aftermath of the riot, USCP investigated 35 of its officers for their actions during the event, with six of them being suspended without pay last week, including the one who snapped a selfie and another who reportedly helped guide the mob around the building.

In addition to the USCP officer who died, four of the rioters also died in the attack, including one woman, 35-year-old Air Force veteran Ashli Babbitt, who was shot and killed by a USCP officer as she attempted to force the Senate chamber doors open. At least two USCP officers have also died by suicide since the insurrection.

In the days after, Trump was impeached for a second time and charged with inciting the uprising, although he was acquitted by a minority in the Senate trial earlier this month.