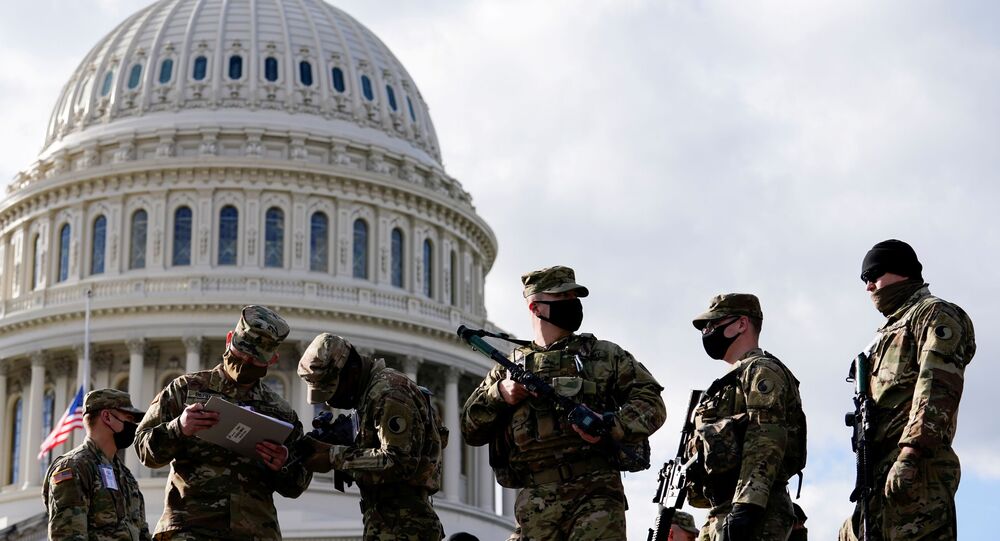 The former chief of US Capitol Police said that he called the Pentagon for assistance half a dozen times as his officers lost control of the deadly insurrection outside the legislature on January 6, but was rebuffed by senior defense figures reportedly over fears of how the public would react to the move.

In the lead up to the deadly January 6 insurrection at the US Capitol, which saw five people killed, including a police officer, the Pentagon severely restricted the authority of the commander of the District of Columbia National Guard, the latter told the Washington Post on Tuesday. The revelation sheds further light on how the senior political military command hamstrung the ability of law enforcement to defend the nation's capitol against the riot.

Maj. Gen. William J. Walker, the commanding general of the District of Columbia National Guard, told the Post that he was deprived of the ability to deploy even small numbers of troops on his own by Trump-appointed political higher-ups who feared a repeat of the June 2020 White House public relations disaster.

When the national guard was called in to suppress massive antiracist and anti-police-brutality protests in the wake of the killing of George Floyd, a black man in Minneapolis, Minnesota, by white police, their heavy-handed tactics aroused fury across the nation. No incident better captured the guard’s excesses than their use of a “buzzing” tactic against protesters by hovering several helicopters just feet over their heads.

Sputnik Screenshot
A National Guard UH-72 Lakota helicopter is seen hovering just feet above the heads of protesters in Washington, DC, on June 1, 2020

Orders to perform the so-called 'persistent presence' maneuver, which is commonly used by US forces occupying Iraq and Afghanistan, came from the Pentagon, not the DC Guard, the New York Times reported. According to the paper, Army Secretary Ryan McCarthy and the Army’s chief of staff, Gen. James C. McConville, pressured Walker to end the protests, in order to convince then-US President Donald Trump that active duty troops would not be needed.

‘I Did Not Have That Authority’

The incident was so egregious it prompted an outcry from many, including Human Rights Watch, which typically directs its ire at US enemies. As a result, Walker told the Post, he was not allowed control over even the small reserve force of 40 guardsmen on January 6, 2021, when thousands of protesters fresh from Trump's White House 'Stop the Steal' rally came crashing down upon police outside the US Capitol building, destroying public property and killing five people.

“All military commanders normally have immediate response authority to protect property, life, and in my case, federal functions - federal property and life,” Walker told the Post. “But in this instance I did not have that authority.”

Walker said he was required by McCarthy to submit a formal request for a “concept of operation” approval that by definition precluded the possibility of deploying National Guard units in response to an emergency.

He also noted that former Capitol Police Chief Steven Sund, who resigned in the wake of the uprising, asked beforehand if he would get National Guard support if things got out of hand.

“All he said was, ‘If I call you, will you be able to help?’ ” Walker said. “And I said, ‘Yes, but I need permission. So send a formal request,’ and I never got it, until after the fact.”

Sund’s first panicked request arrived at 1:49 pm as Capitol police were overwhelmed by many hundreds of Trump supporters, some heavily armed.

“I am making an urgent, urgent immediate request for National Guard assistance,” Sund recalled to the Post as saying at the time. “I have got to get boots on the ground.”

“I told him I had to get permission from the secretary of the Army and I would send him all available guardsmen but as soon as I got permission to do so,” Walker said. “I sent a message to the leadership of the Army, letting them know the request that I had received from Chief Sund.”

There were further delays across the river at the Pentagon, which mulled the decision for an additional 75 minutes, later claiming that it was the Guard's fault for not preparing for rapid mobilization.

Meanwhile, Trump supporters had already breached the Capitol at several points - aided by seemingly sympathetic elements of the Capitol Police and GOP congress members themselves - and lawmakers was forced to suddenly disperse and run to safety. A subsequent analysis of events has shown that an organized, militant faction of the violent insurrection intended to capture, kidnap and possibly kill leading members of Congress and several progressive lawmakers.

The Trump supporters were reportedly intent on halting Congress’ certification of the November 3, 2020, election, which Trump had never stopped claiming was fraudulent. Lawmakers were meeting that day to certify the results which showed US President Joe Biden as the winner, a task assigned by the US Constitution.

According to senior political Pentagon officials who spoke with the Post on the day before the riot, the absence of troops at the Capitol going into the Wednesday protest was a question of optics. One Trump appointee at the Pentagon told the paper the military had “learned its lesson” from the previous June and would be “absolutely nowhere near the Capitol building” because “we don’t want to send the wrong message.”

National Guard troops did not arrive at the Capitol until around 5:30 pm that evening, after Capitol Police had cleared the national legislative building of protesters and just 30 minutes before a citywide curfew ordered by DC Mayor Muriel Bowser went into effect. Five people died in the insurrection, including a police officer who was beaten to death by Trump supporters, which also resulted in widespread damage to the Capitol. The rioters failed to stop the confirmation, however and lawmakers soon reconvened and certified the election results.

Trump has since been impeached for "incitement of insurrection" - an unprecedented second impeachment of a sitting US president, but his Senate trial has not yet begun. Biden was sworn in under the watchful eye of over 25,000 US troops on January 20, who remained in the city to guard against further threats of violent right-wing action.