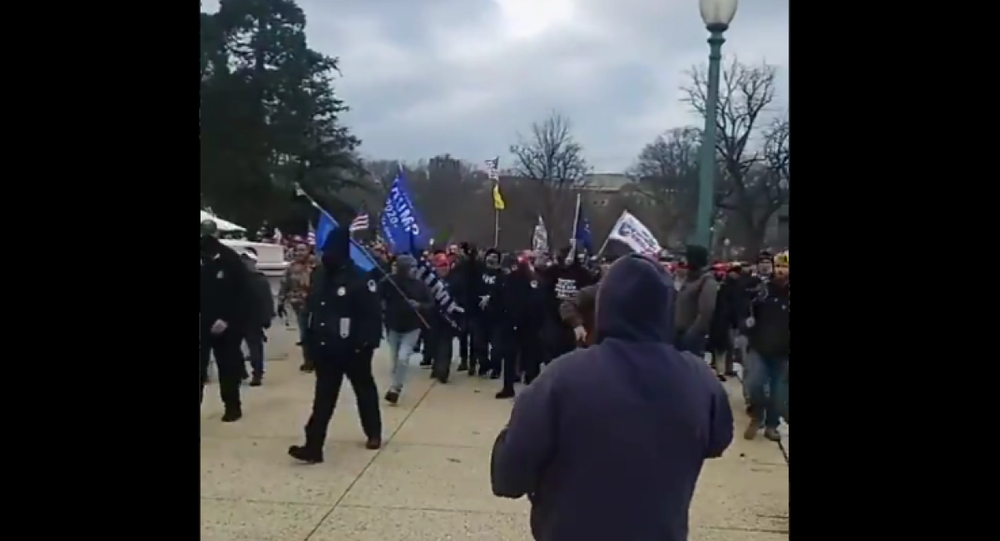 US President Donald Trump has urged his followers to leave the Capitol peacefully after they stormed the building following his angry speech denouncing the 2020 election results earlier in the day.

Video has emerged on social media that appears to show US Capitol Police officers pulling barricades away to let pro-Trump protesters through outside the US Capitol on Wednesday.

In the short video originally posted on TikTok before making its way to other social media, a group of officers gathered in front of a barricade are seen seemingly unlinking the barricades and pulling them back so that the dozens of angry protesters on the other side can pass through. As the protesters surge forward, the officers do nothing to stop them, and they charge toward the US Capitol building.

​The incident is notable since police use of flash-bang grenades and pepper spray to push protesters back from police barricades was also documented at other spots around the Capitol, and police were heard ordering the protesters to disperse.

Once inside, further footage seems to corroborate the thesis that police permitted some of the protesters to enter the national legislature, where Congress was meeting to certify the November 2020 US presidential election results. Film shot inside the halls of the Capitol shows a group of demonstrators climbing the stairs and moving down a hallway as a few police officers steadily retreat down the hall.

​Further footage cut from a livestream inside the Capitol appears to show an unmasked protester snapping a selfie with a US Capitol Police officer.

Cops are taking selfies with the terrorists. pic.twitter.com/EjkQ83h1p2

​The short clip appears to be filmed in or near the congressional offices, where protesters were also photographed sitting at the desks of lawmakers such as House Speaker Nancy Pelosi.

Wednesday’s certification of the results by Congress is the final step in making the outcome of the November 3 election official. After a contentious period of uncertainty, the original ballot counts showing US President-elect Joe Biden as winning were upheld. Trump has continued to insist the election was fraudulent and refused to acknowledge Biden as the winner, even as the US Electoral College cast its votes last month in Biden’s favor.

Before the protesters stormed the US Capitol on Wednesday afternoon, they heard Trump speak outside the White House at a “Stop the Steal” rally he has been promoting on Twitter.

“We will never give up, we will never concede,” Trump told the assembled crowd, which was several thousand strong. “We will stop the steal!”

Washington, DC, Mayor Muriel Bowser placed a 6 p.m. curfew over the city on Wednesday afternoon, and DC National Guard units have been activated to restore order.