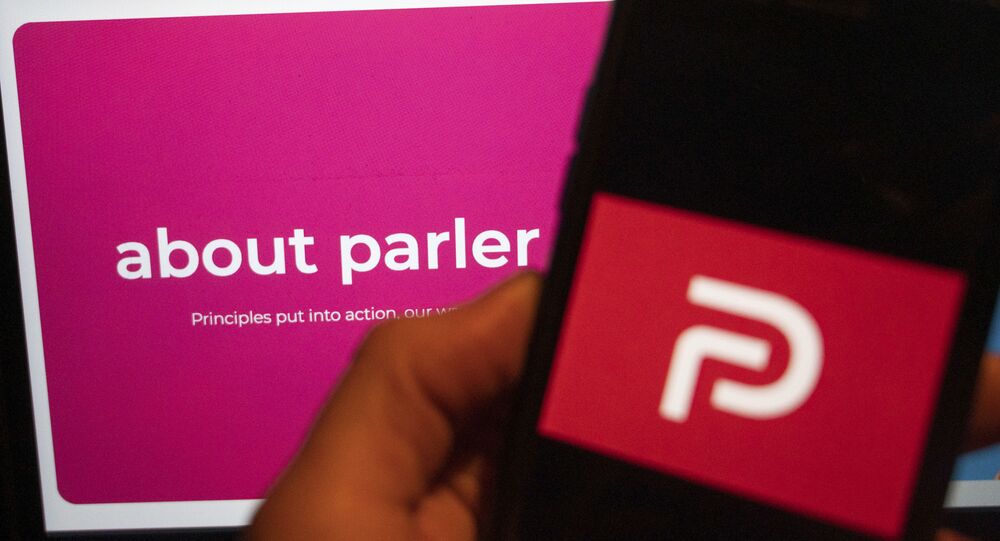 The social media network, which purportedly enjoys favour from conservative-leaning netizens, was repeatedly blamed for allowing "violent content" to thrive on its platform in the wake of the 6 January Capitol riot. The company, however, pointed out that much of the content was actually posted on mainstream social media, like Facebook.

Parler took "the extraordinary initiative to develop formal lines of communication" with the FBI well before the Capitol riot and notified the agency about at least 50 accounts with "violent content" before removing them from the platform, the company revealed in a response to an inquiry by the House Oversight Committee.

The company said it warned the FBI about posts encouraging acts of violence, including ones related to the 6 January unrest:

"In fact, in the days and weeks leading up to 6 January, Parler referred violent content from its platform to the FBI for investigation […] even alerted law enforcement to specific threats of violence being planned at the Capitol", Parler said, rejecting previous accusations of serving as a "far-right instigator" for the violent mob.

The social media platform went on to state it "regularly" relayed posts that "called for violence" or simply deserved law enforcement attention, bringing up threats directed against ex-Attorney General Bill Barr as an example of these actions. Parler shared that in November 2020 one of the FBI agents the company was working with "spoke highly" of the platform's "relationship" with the agency concerning notifying it about "unlawful posts".

"Even after the violent attacks stopped, Parler continued to dutifully and proactively report posts to the FBI where users threatened additional violence", Parler added.

The company's statements came in response to House Oversight Committee allegations of the platform's role in the riots. The Democrat-led committee also inquired whether Parler had hidden "ties to the Russian government" in line with the party's well-established practice of trying to find the Kremlin's hands in any mischief that takes place in the US or any fiasco that the Democrats suffer politically.

Parler strongly rejected allegations of ties to Moscow. The company also pointed the finger at the mainstream social media as a bigger source of concern over violent content, citing Forbes' analysis issued in February which suggested that Capitol rioters mostly used Facebook, rather than Parler.

"[Parler] thereby set[s] the record straight about Big Tech's damaging disinformation campaign and anti-competitive efforts to de-platform the  company. As explained above, Parler was poised to challenge Twitter's and Facebook's dominance of social media when the Big Tech giants colluded to scapegoat Parler for the tragic events at the Capitol on January 6th", the company wrote in its response to the Committee.

The Big Tech companies Parler accuses of spreading false information about it, also took their round of beating in Congress on 25 March. Representatives from Twitter, Facebook, and Google were grilled over their potential role in spreading all sorts of fake information via their platforms and faced calls to be held accountable for the content users publish on their websites.

Parler Taken Offline by BigTech in Wake of 6 January Riot

The social media platform, which is purportedly favoured by conservative netizens, was accused by American tech giants of helping rioters spread hate content and calls for violence. In the wake of the 6 January riots, Apple and Google booted Parler from their mobile app stores, while Amazon removed the company from its cloud servers that were responsible for the platform's functioning, thus taking Parler offline for weeks. Parler strongly condemned the actions by Big Tech as anti-competitive behaviour and rejected all accusations levelled at it.

Several hundred pro-Trump supporters stormed the US Capitol on 6 January soon after the then-president's speech at a "Stop the Steal" rally during which Trump repeated his unsubstantiated allegations of election fraud. The rioters thwarted the confirmation of the election results by Congress, forcing the evacuation of lawmakers and Vice President Mike Pence, who was present in the Capitol at the time. Both major political parties and POTUS himself condemned the actions of the mob, but Democrats were quick to blame Trump, as well as Parler, for being responsible for the violent riot, which claimed the lives of one Capitol Police officer and several protesters.

Parler May 'Be Back Up' By End of Month, CEO Matze Says as He Touts 'Big Milestone'