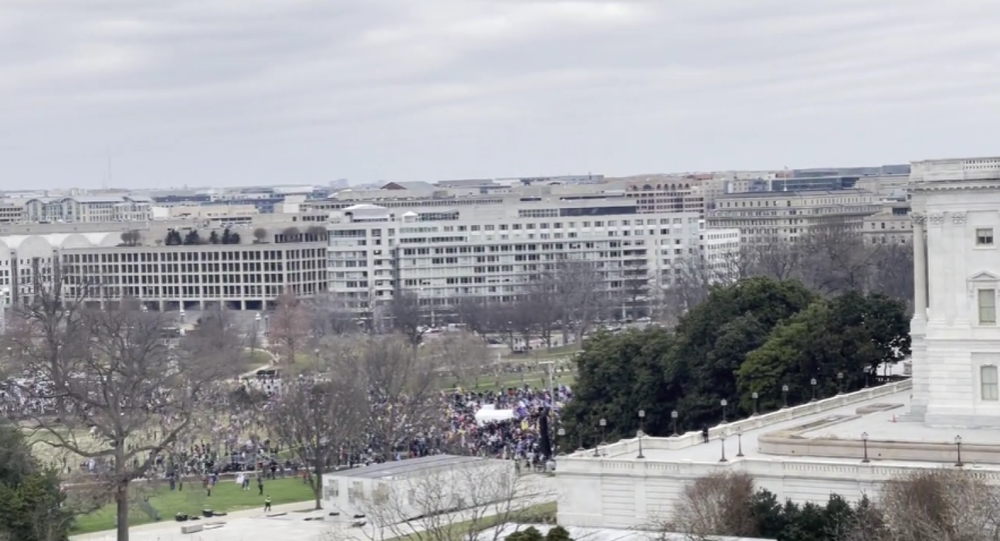 ‘We Hear You Loud and Clear!’ Staffer for Rep. Gaetz Cheered on Insurrectionists on Parler

Democrats have pushed for an investigation into the abnormally high number of guided group tours of the Capitol in the days immediately prior to the January 6 insurrection over fears that some may have been insurrectionists being led by sympathetic Republican lawmakers.

An assistant to Rep. Matt Gaetz (R-FL), a fierce loyalist of former US President Donald Trump, cheered on the insurrectionists as they stormed the US Capitol on January 6, posting a video from across the street on the Parler messaging site used by Trump supporters to plan the assault.

“From the top of the Capitol office buildings, WE HEAR YOU LOUD AND CLEAR!” The message posted on Parler by Joel Valdez, an assistant to Gaetz, was accompanied by a 5-second video shot from the roof of the Longworth House Office Building, a massive structure that overlooks the southern side of the US Capitol, and the hashtag #StopTheSteal.

Gizmodo first reported on the message, but noted that ProPublica had published the metadata of Valdez’s video last month without connecting it to the staffer. According to the outlet, the video was posted at 1:14 pm on January 6, by which time the insurrectionists had broken through US Capitol Police lines at several points and were engaged in a close-in fight with security forces on the Capitol steps, meaning they were just moments from entering the building itself.

The rioters had marched to the national legislature from the White House’s south lawn at the other end of the National Mall, where Trump hosted a “Stop the Steal” rally and encouraged his supporters to take action against the certification of the November 3, 2020 election, which he lost but maintained was fraudulent. Congress at that time was assembled in a joint session at which they were doing just that, but dispersed to find safety as Trump’s supporters flooded into the Capitol halls.

However, Jillian Lane Wyant, Gaetz’s chief of staff, told Gizmodo that Valdez believed he only witnessing a protest, not an insurrection.

“A staff member in our office posted on his personal Parlor [sic] account about the President’s rally before the Capitol had been breached or anyone was harmed,” Wyant told the outlet. “He also immediately amplified President Trump’s call on social media for those in attendance to go home. He regrets that the post has been misinterpreted as support for violence by some. It was not.”

Gizmodo noted there was no sign Valdez had amplified Trump’s later calls for an end to the violence at the Capitol - only the calls to “stop the steal.”

Gaetz has been a fierce defender of Trump, pledging to challenge the votes of Electoral College electors whose states Trump claimed ran fraudulent elections. After the insurrection, he has defended Trump against the impeachment trial for allegedly inciting the insurrection, and has sought the ouster of Republican lawmakers who voted for impeachment, including Rep. Liz Cheney (R-WY).

The day after the riot, Gaetz attempted to blame the Capitol violence on Antifa, the ill-organized left-wing anti-fascist protesters that he called “terrorists” he wanted to “hunt down” during the protests against police violence and white supremacy that rocked the country last summer. However, his claims were quickly disproven, as the people observers claimed were Antifa were instead revealed to be far-right and neo-Nazi instigators and adherents to the QAnon conspiracy theory movement.

This isn’t the first incident involving one of Gaetz’s aides, either: in 2017, Foreign Policy revealed that Devin Murphy, an legislative aide to the congressman, had effectively crowd-sourced legislation aiming to hijack a Democratic resolution by using content from “The_Donald,” a subreddit on the Reddit message board site. The subreddit was banned in June 2020 for orchestrating targeted harassment and was known as a hotbed of conspiracy theories and hateful ideas.

During the insurrection, other Republican lawmakers also cheered on the rioters, including Sen. Josh Hawley (R-AR), who was photographed giving the crowd a raised fist outside the Capitol. In the days after the assault, dozens of Democratic lawmakers spearheaded an investigation into tours of the Capitol building allegedly given to the insurrectionists by Republican lawmakers in the days before the January 6 storming.

Five people died in the assault, including a police officer beaten to death with a fire extinguisher and a female rioter who was shot by a guard outside the Senate chamber. While the legislative building was damaged and looted, they failed at their goal of capturing either the Electoral College ballots or key lawmakers, and after police cleared the rioters from the building, lawmakers reconvened and finished certifying the results.

A separate investigation is underway into the poor preparations for the attack by the authorities, including why there were so few Capitol Police defending the building and why the National Guard took so long to respond to the violence. Guardsmen only arrived in the hours after the attackers had been cleared from the building, but tens of thousands flooded into the capital city to secure the January 20 inauguration against further violent plots rumored to be threatening the peaceful transfer of power.