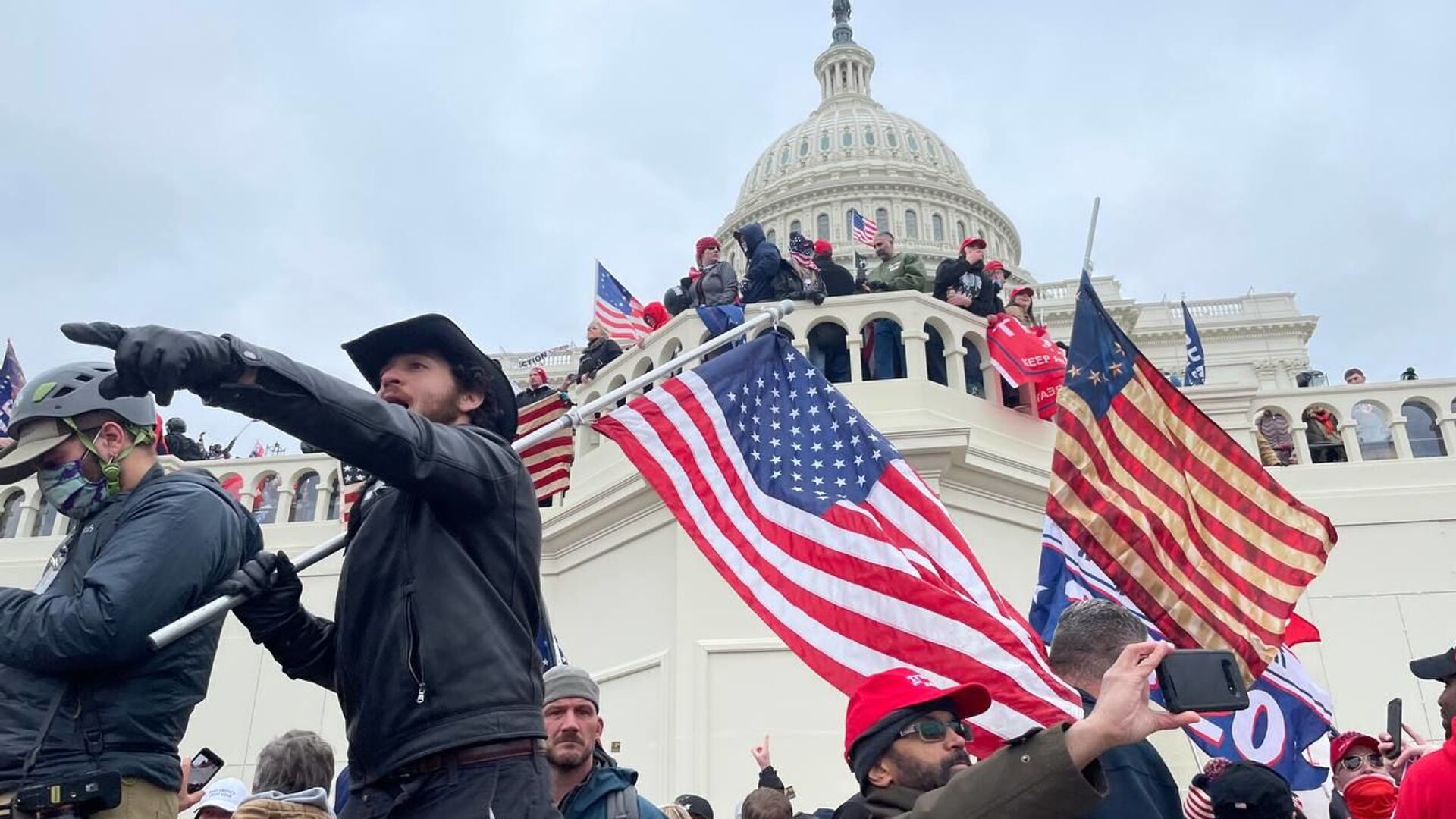 Ekaterina Blinova
All materialsWrite to the author
While Democrats raise the alarm about "right-wing extremists", left-wing militant groups continue to operate in plain sight and get away with reported violence, says US investigative journalist Jason Goodman.

On 8 March, a federal judge ruled that Jacob Chansley, also known as the "QAnon Shaman", should remain in jail pending his trial over the Capitol breach of 6 January 2021 as he still poses a "threat" to the public.

Roughly two months earlier, yet another participant of the Capitol takeover, John Earle Sullivan, a founder of the racial justice group Insurgence USA, was released by a federal court despite prosecutors insisting that the protester remains a danger to the community.

Why Did Judge Let Sullivan Go?

Why Chansley is still behind bars while the court let Sullivan go is an excellent question that remains unanswered, says investigative journalist and founder of Crowdsource the Truth Jason Goodman, who interviewed Sullivan earlier this month.

"In my interview with him, Sullivan insisted this decision was made because he is innocent", says Goodman. "His claim, however, flies in the face of video and audio evidence that clearly show him inside the Capitol building saying things like 'let's burn this sh** down' and 'we need to get this sh** burnt'. Sullivan can be heard at other times narrating his own YouTube video and encouraging rioters to scale the Capitol walls. In current iterations of the video, Sullivan has excised a portion of the footage in which he is seen with female accomplice Jade Sacker congratulating each other with hugs, and exclamations including 'we did it!'"

An arrest affidavit by FBI agent Matthew B. Foulger, who analysed the footage, states that Sullivan, a Utah resident, was indeed seen saying these things to people as well as leading the crowd in a chant of "it's time for a revolution". The affidavit also specifies that on 13 July 2020, the Utah resident was charged with rioting and criminal mischief "based on his activities around a 30 June 2020 protest in which a civilian was shot and injured". At the time of Sullivan's arrest over the DC riot, the case was still pending.

"By contrast, self-proclaimed QAnon shaman Jacob Chansley does not seem dangerous as determined by Federal judge Royce Lamberth", suggests Goodman. "Chansley appears to be an attention seeker and possibly a delusional fool who has demanded organic food while in prison and appeared as a featured subject on 60 Minutes".

The mainstream press largely describes Sullivan as a left-wing BLM African American protester. On 27 July 2020, The Guardian mentioned him as the Insurgence USA founder and organiser of racial justice protests in Provo, Utah. For his part, Andy Ngo shared a video featuring Sullivan who was speaking at BLM Plaza in DC in August 2020 and calling for "revolution".

​Earlier this year, the US media drew attention to the relatively "soft" handling of cases involving Black Lives Matter, Antifa, and left-leaning racial justice groups by the authorities. In January 2021, KOIN 6 News bemoaned the Portland authorities' months-long practice of "catch-and-release" of rioters. Conservatives argue that this approach has only emboldened violent protesters: over the weekend left-wing militants vandalised the Mark O'Hatfield Courthouse in Portland.

Antifa set fire to the federal courthouse in downtown Portland. There are people inside. #PortlandRiots #antifa pic.twitter.com/9sxBZkDe2t

However, neither left-wing nor right-wing groups recognise Sullivan as being a member of their organisations. The New Yorker quoted Black Lives Matter organisers who accused the Utah resident of being an "agent provocateur", a "con artist", or a "thrill-seeking instigator". As for Sullivan, he denies being an Antifa or a Trump supporter.

"I believe John Sullivan represents a new breed of subversives who operate in plain sight", suggests Goodman. "A sophisticated, decentralised network of disconnected individuals can use technology and social media to have nationwide and even worldwide impact. We are witnessing an unprecedented psychological and cyber war against civilians". 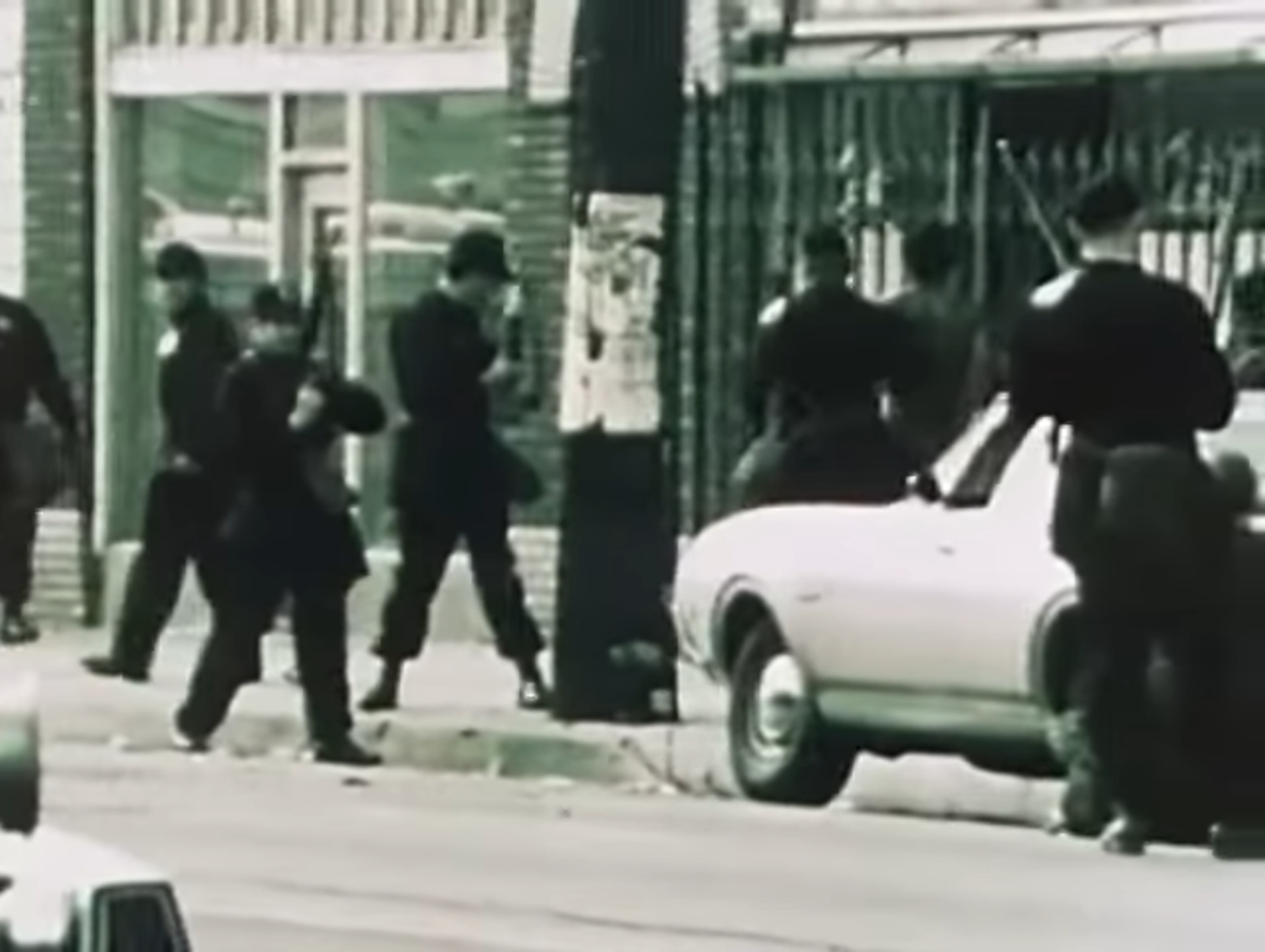 Blast From the Past?

Yet if one wants to ban left-leaning groups such as Antifa or other left-wing militants one would find this extremely difficult since they are not an "organisation", but an "ideology" as FBI Director Christopher Wray told US lawmakers in September 2020. According to US law, people cannot be spied upon for their political ideology or membership in certain groups. This "loophole" was apparently used by the movement to evade scrutiny.

In response to Donald Trump's calls to classify Antifa as terrorists, Dr Troy Whitford, a Charles Sturt University academic, explained in an op-ed, that "the benefit of a leaderless resistance and direct action is that there is no specific organisation for security agencies to target". At the same time, the academic noted that the fluid group's greatest weakness is its "heavy reliance on social media to organise and conduct protests" which can be exploited by law enforcement or national security.

"The stunning irony is that Antifa is an idea", Goodman says. "There is no national leader, no board of directors, and no steering committee. While historically Antifa was not like this, the modern American incarnation of Antifa has metastasised into something far more dangerous than an angry street mob".

It appears the movements have 20th century prototypes, founded at the time as "organisations", and who were on the radar of the FBI and the US police, according to the journalist. For instance, Black Lives Matter apparently draws inspiration from the Black Panthers, a left-wing militant black power organisation founded in 1966, Goodman notes. The Black Panthers are famous for entering the California Capitol with guns in 1967. The Black Lives Matter movement does not deny the connection.

"[The Black Panthers] exist as a continual barometer to measure ourselves against—both in terms of lessons that have been garnered as well as challenges in terms of where we can improve or deepen our analysis", Aislinn Pulley, a co-founder of Black Lives Matter (BLM) Chicago and a co-executive director of the Chicago Torture Justice Centre, told Time magazine in February 2021.

#OtD 2 May 1967 armed Black Panthers marched into the California Capitol protesting a gun control bill which was targeting them. Supported by the NRA, Reagan signed the bill to stop Panther police self defence patrols. Learn more about the group: https://t.co/4yX6Uq9m3b pic.twitter.com/ITIhrFPhnA

​At the same time, Antifa in many respects resembles the Weather Underground, a radical left militant organisation that was active in the late 1960s and 1970s, according to Goodman. Interestingly, the Weather Underground prompted a controversy during Barack Obama's 2008 campaign: according to The Wall Street Journal Obama had ties to the organisation's founder Bill Ayers and even launched his first run for the Illinois State Senate at Ayer's home.

Americans are seemingly witnessing the reincarnation of the Weather Underground, Black Panthers. and other left-wing movements, and they appear to have learned a lot from previous mistakes, Goodman concludes.