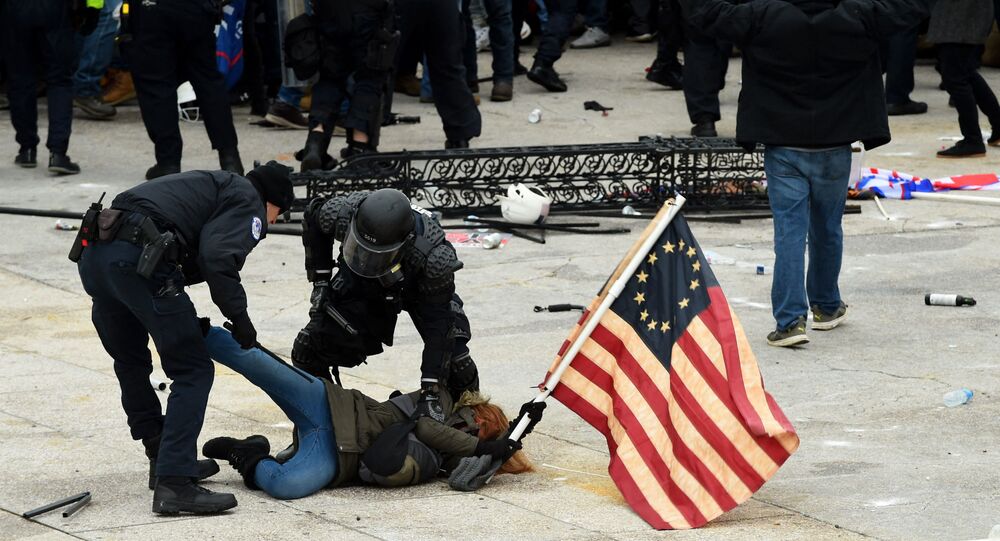 The suspected use of a chemical spray hasn’t been directly linked to the death of Brian Sicknick, one of three officers allegedly attacked, who passed away in hospital on 7 January, the day after the Capitol siege.

The US authorities have arrested and charged two suspects who allegedly worked together to spray a chemical irritant on three Capitol Police officers during the 6 January riot, one of whom, Brian Sicknick, died the next day. It is unclear whether it was the spraying that caused the officer’s death.

Investigators initially believed that Sicknick had been hit in the head with a fire extinguisher, based on testimonies collected earlier in the investigation.

George Tanios, 39, of Morgantown, West Virginia, and Julian Khater, 32, of Pennsylvania, were expected to appear in federal court Monday over the newly collected evidence in the case.

Khater is reportedly featured in a video obtained by the FBI that showed him spraying Sicknick and others with bear spray, court papers say.

The man could then be heard saying: “they just (expletive) sprayed me", as he held up a white can with a black top that prosecutors believe to be ''a can of chemical spray".

Officials consider Sicknick’s demise as a line-of-duty death, saying he physically had engaged with those who stormed the building of the federal legislature, which was voting to certify Joe Biden's electoral win over Donald Trump on 6 January.

A group of the former president’s supporters entered the Capitol shortly after a MAGA rally to protest against the outcome of the 3 November election, which Trump claimed was stolen from him.