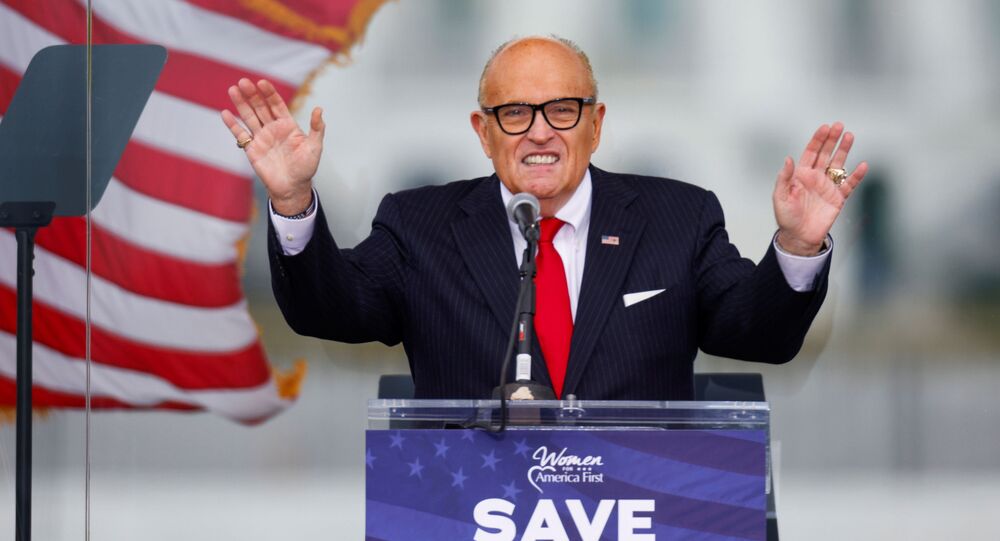 Donald Trump’s personal attorney Rudy Giuliani had been a central figure in the largely-failed campaign to file lawsuits in attempts to overturn the results of the 2020 presidential election, based on claims of polling fraud. Sources had earlier claimed Trump was irritated with Giuliani and had not been taking his calls.

Donald Trump's personal attorney Rudy Giuliani, who spearheaded the president's efforts to overturn the 2020 election results, has revealed that he is far from having been sidelined, and is working as part of the defense team in the POTUS’s upcoming second impeachment trial in the Senate, reports ABC News.

"I'm involved right now … that's what I'm working on," said Giuliani, adding that he is gearing up to argue that Trump's claims of a ‘stolen’ election cannot have constituted incitement to violence because the claims are true.

Giuliani, who was reportedly later seen at the White House, said there are "different opinions" on how the president should approach his second impeachment.

On 13 January the US House of Representatives voted to impeach US President Donald Trump a second time for “incitement of insurrection” by 232-197, with 10 Republicans crossing party lines to side with the Democrats.

© AFP 2021 / BRENDAN SMIALOWSKI
Photographers take pictures of the article of impeachment against US President Donald Trump during an engrossment ceremony after the US House of Representatives voted to impeach him at the US Capitol, January 13, 2021, in Washington, DC.

In the wake of the riots that took place at the Capitol on 6 January, when Congress had convened to certify the election win of Democrat Joe Biden, Trump was accused of inciting his supporters to storm the building.

On the day of the congressional session, Trump supporters had converged in Washington DC from around the country to attend a speech by the outgoing president on the White House lawn, where the President reiterated his claims that the election had been ‘stolen’ from him, and ‘rigged’ to favour his opponent, Democrat Joe Biden.

Later in the day, around 200 Trump supporters broke into the US Capitol building, causing widespread damage and vandalism, interrupting the certification procedure, and leading to five deaths.

The House of Representatives first impeached Donald Trump in late 2019 for abusing power and obstructing Congress amid claims he pressured Ukraine into investigating the Biden family’s dealings in that country.

At the time, the Senate subsequently acquitted him 52-48 and Trump was not removed from office.

However, many of the lawyers involved in the president's first impeachment, such as White House counsel Pat Cipollone and his deputies, as well as outside lawyers Jay Sekulow and Jane and Marty Raskin, do not plan to return for the second trial.

Aides to the president have reportedly spoken with former Harvard professor Alan Dershowitz, who was involved in the first impeachment trial, about joining the team.

Voter Fraud as a Defence Argument

Rudy Giuliani has purportedly suggested that in his defense of the president, he would introduce allegations of widespread voter fraud that had previously formed the central argument of a widespread court battle by the Trump campaign to overturn the 20202 election results.

"They basically claimed that anytime [Trump] says voter fraud, voter fraud -- or I do, or anybody else -- we're inciting to violence; that those words are fighting words because it's totally untrue. Well, if you can prove that it's true, or at least true enough so it's a legitimate viewpoint, then they are no longer fighting words," said the former New York City mayor, who had also addressed Trump supporters at the rally on 6 January.

Giuliani was also cited by the outlet as personally believing that Trump should move to dismiss the trial.

"If they decide to bring it to a trial, he should move to dismiss the impeachment as entirely illegal. That it was the only impeachment ever done in what, two days, three days… We would say to the court, 'You are now permitting in the future, basically in two days, the Congress can just impeach on anything they want to."

Another argument that Giuliani would ostensibly use to dismiss the validity of the single article of impeachment accusing Trump of inciting violence would be the time delay between the president's rally speech and the attack.

According to Giuliani, if the attempt to dismiss the impeachment article were to be unsuccessful, one should not rule out Trump testifying, although the president’s lawyers had opposed the move during his first impeachment trial.

"You always make that decision at the last minute. As a lawyer, I wouldn't be as strongly opposed to his testifying as I was then," he said.

Another big question about Trump's final days of tenure is what pardons he may issue and whether he might try to pardon himself.

The POTUS has discussed the possibility, according to sources, yet it is unclear if executive clemency powers under the constitution would allow this, despite the fact that the issue is very broadly worded in the supreme law of the United States.

The last time the Justice Department weighed in on the issue was in a memo dated 1974, writes Reuters.

“Under the fundamental rule that no one may be a judge in his own case, the President cannot pardon himself,” a Justice Department lawyer wrote, when it was deemed unconstitutional for then-President Richard Nixon to pardon himself. Nixon subsequently resigned amid the Watergate scandal.

The Constitution does not explicitly address the possibility, and no president has tried it before.

White House Counsel Pat Cipollone is said to have advised Trump against a self-pardon under the belief that it would not hold up in court, according to sources.

Rudy Giuliani was quoted by ABC News as believing that self-pardon is justified.

The former Mayor of New York City dismissed earlier voiced concerns by some Trump advisers that a self-pardon would leave him more vulnerable in the face of future civil lawsuits due to it being perceived as an admission of guilt.

"I mean his legal life's gonna be complicated no matter what… Maybe because I'm more of a criminal lawyer than a civil lawyer, I'd much rather have my civil life complicated than my criminal life," concluded Giuliani.

Now the question is whether the Senate will convict Donald Trump when the impeachment reaches the upper house, and when the trial might take place.
House Speaker Nancy Pelosi (D-Calif.) failed to offer clarification at a press conference on 15 January.