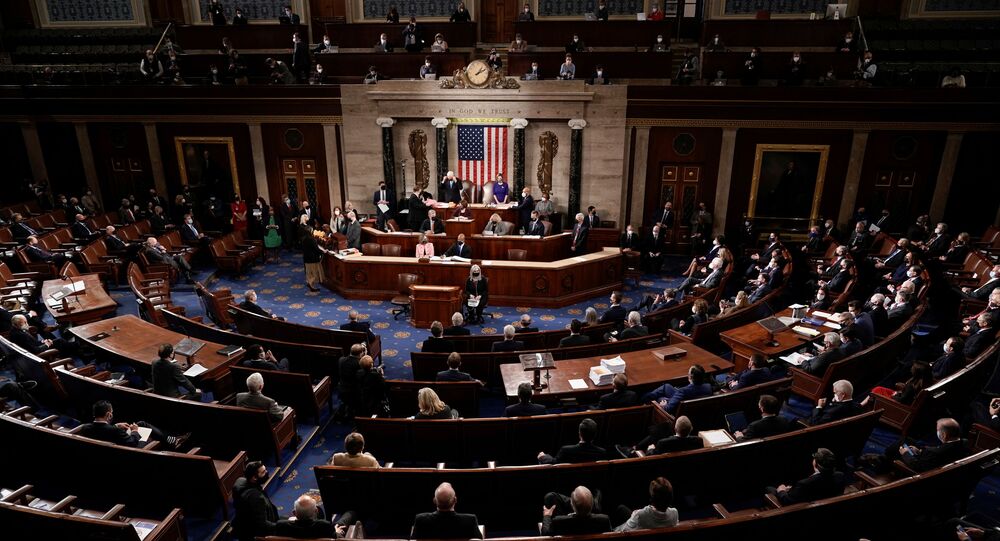 Democrats are intending to force the outgoing US president, Donald Trump, to resign through impeachment, accusing him of inciting an angry mob on 6 January to storm the Capitol building. Trump more than once said he wanted "no violence" on US streets and described the move to impeach him a second time as a "continuation of the greatest witch hunt".

Bill Kristol, a leading figure of the anti-Trump movement, Defending Democracy Together, tweeted on Tuesday the launch of a Republican Accountability Project initiative, implying that those Republican lawmakers who act against the outgoing US president, Donald Trump, will be eligible to receive support from a newly-established $50 million fund for protection and future primaries.

Kristol claimed that the cash would help “defend Republicans who act to hold President Trump accountable for inciting an attack on the US Capitol, and to deploy against those who continue to lie to voters about widespread election fraud.”

Among the Project's primary aims announced by Kristol are:

Today, Defending Democracy Together, home of Republicans for the Rule of Law and Republican Voters Against Trump, announced it would raise and spend $50 million...

In a personal statement as chair of Defending Democracy Together, Kristol urged Republicans to “do the right thing” and “vote to impeach or remove Donald Trump”.

“We say to any Republican who votes to impeach or remove Donald Trump: You will not be left alone. We will help you against primary challenges. And before the challenges emerge, we will help explain your vote to your constituents. So do the right thing. We will have your back”, he wrote.

We want to say to any Republican who votes to impeach or remove Trump: You will not be left alone. We will help you against primary challenges. And before the challenges emerge, we will help explain your vote to your constituents. So do the right thing. We will have your back.

The Defending Democracy Together group presenting the initiative is considered to be a never-Trump conservative organization. The so-called Never Trumpers earlier created other political enterprises such as Republicans for the Rule of Law and Republican Voters Against Trump. The group was founded in 2019 by Bill Kristol, Mona Charen, Linda Chavez, Sarah Longwell, and Andy Zwick.

Last week, a violent mass protest in Washington that saw five people killed occurred as the certification of the Electoral College vote was being held. Trump supporters violently attacked and entered the Capitol and interrupted the joint Congress session, breaking windows, stealing and causing damage and vandalism to parts of the interior, alongside death and multiple injuries.

Trump has concurrently and repeatedly denied that he encouraged his supporters to attack the US Capitol. On January 6 he tweeted that his supporters should "go home now" and observe "law and order".

Law enforcement agencies throughout the country are looking for information about those who participated in the 6 January Capitol building attacks. Some protesters have been apprehended and charged, including two US Capitol Police officers that were suspended for facilitating the rioters entry into the capitol building.

Democrats and a number of Republicans are demanding the US president’s resignation, accusing him of responsibility for the 6 January deaths caused by Trump’s supporters.

They have urged Vice President Mike Pence to enact Section 4 of the 25th Amendment to force Trump to step down. US House Democrats on 11 January introduced a second article of impeachment against POTUSm accusing him of "inciting insurrection".

The Article of Impeachment: Incitement to Insurrection, drafted by Rep @davidcicilline, @RepRaskin, me & @HouseJudiciary staff, has now been formally introduced at the House pro forma session today. https://t.co/Y6ntbSXF9G pic.twitter.com/MfB4CpqC6C

As Biden's inauguration approaches, law enforcement have warned that they expect large demonstrations and armed protests. The Pentagon has deployed 6,200 National Guard troops to Washington DC and its immediate environs until at least February 6, and the guard has been authorized to deploy as many as 15,000 troops, if additional forces are requested.

'The Mainstream Media's Treatment of Trump Has Been Disgraceful,' Analyst Says