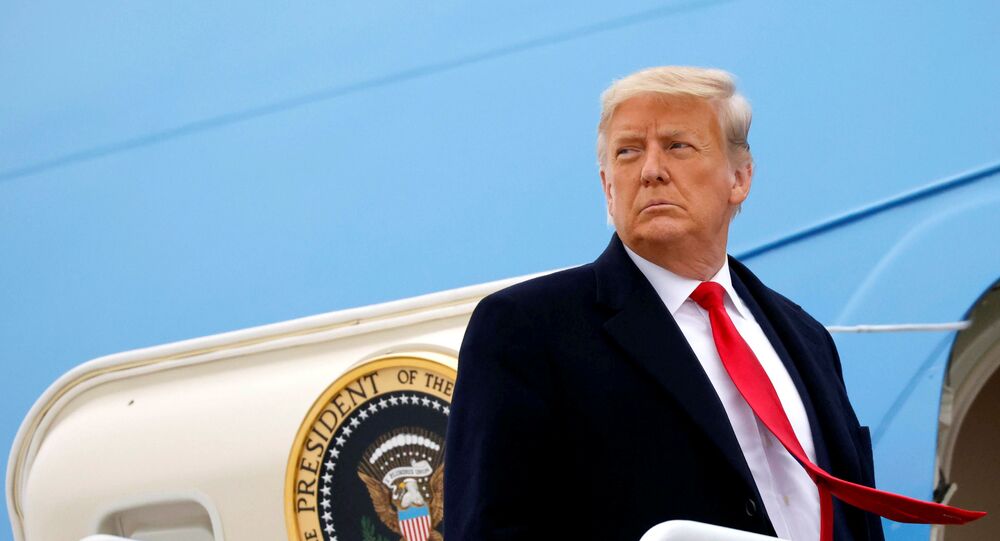 Following the November 2020 election, the incumbent president, Donald Trump claimed that his opponent's victory was fraudulent, leading his ardent supporters to echo unfounded claims as a rejection of the upcoming 20 January transition to a Biden presidential administration.

Peter Navarro, a top trade adviser appointed by Donald Trump, is continuing to claim that the outgoing US president was "legally" elected, reiterating his position to Fox Business Network on Thursday.

Speaking to Fox's Maria Bartiromo, Navarro also claimed that Trump would emerge victorious in any second run of the election.

"The Democratic Party did violence to this country by attacking a president, who I believe was legally elected on November 3,' Navarro asserted. 'If the election were held today, he'd be elected again. And if he runs in 2024, he will be elected then. And I think that’s what the Democrats fear".

Peter Navarro: “The Democratic Party did violence to this country by attacking a president who I believe was legally elected on November 3,” “74 million Americans out there” are “pissed off” like him.

Maria Bartiromo: “We know that there were irregularities in this election.” pic.twitter.com/NFqdKQTjFK

​In response to a question regarding a so-called 'attack on free speech' - referring to President Trump's violation of user terms and subsequent removal from social media platforms, including Twitter and Facebook in the wake of the deadly Capitol Hill attack and the deaths of five people - Navarro suggested that it was a "classic collusive oligopoly" and "kind of new wine in an old bottle".

The Trump appointee expressed his anger with Google, Apple, and Amazon after the tech giants deleted the unmoderated conservative social media site Parler, which bill itself as unrestricted alternative to conventional social media platforms.

"When Amazon came in for the brutal kill, by taking the cloud away from Parler, as a small company, it was no longer able to access its data and effectively Amazon wiped out that company", Navarro stated. "I think they've got a heck of a lawsuit for damages there because of what was done".

On Wednesday's vote impeaching Trump a second time in the House of Representative, which saw 10 Republicans support the Democratic caucus in the move, Navarro characterized the vote as a "travesty".

"And I’ve never been more pissed off in my life at this place", he declared.

Navarro warned of "74 million Americans out there who voted for President Trump who feel exactly the same way", demanding that lawmakers give up on sending the House impeachment to the Senate.

Navarro, an economist appointed by Trump who has served as the latter's White House trade adviser since 2017, on Thursday claimed without presenting any direct evidence that the November 2020 election saw massive voter fraud in swing states which saw Democratic candidate Joe Biden secure the victory.

Entitled: 'Yes, President Trump Won', Navarro's comments claimed that there were ballots alleged to be fraudulent, including nearly 1 million "possible illegal votes" in Pennsylvania, which he says went to Biden by just under 100,000.

Navarro Report, Volume 3 provides a scholarly rendering of the potential number of illegal votes in the 2020 election. We welcome any who may dispute its finding because that is the nature of scholarly discourse. https://t.co/WEDzhth4qo

​The White House advisor's most recent allegations come one day after his boss's second impeachment by the House of Representatives, following accusations that Trump incited the deadly riots on Capitol Hill in a failed attempt to stop the confirmation of what the outgoing US president continues to claim was a stolen election.

If Trump is convicted by the Senate, it will bar him from any future attempts to run for the White House.

Citing a number of allegations in key states claiming that the Biden campaign received ballots from dead voters and how mail-in ballots saw initial leads for Trump overcome by more votes for the Democratic ticket, the outgoing president and his supporters continue to complain that the election was stolen.

While these challenges have been consistently rejected in state and federal courts, a group of Trump supporters on January 6 violently stormed the Capitol building, killing five and inflicting widespread damage and vandalism in an attempt to stop the electoral college vote confirmation and prevent Joe Biden from being officially declared the next US president.