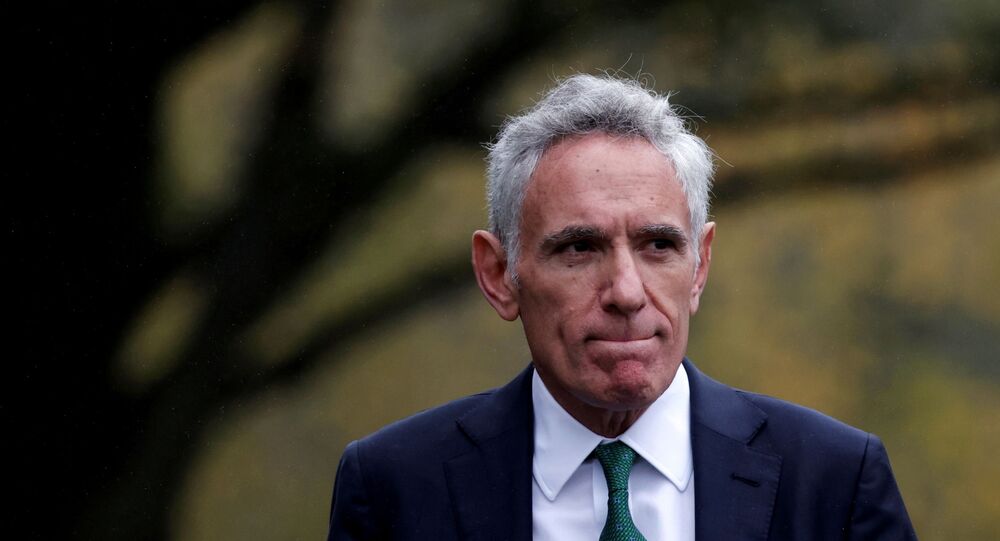 Dr. Scott Atlas, a special Trump-appointed US coronavirus administration advisor since August, is known for making controversial statements, including his suggestion that lockdowns in the US are "extremely harmful" to the nation. His point of view has been criticized by those against a full reopening amidst the COVID-19 pandemic.

A special Coronavirus advisor appointed by US President Donald Trump, Dr. Scott Atlas, resigned from his post on Monday after speaking to Trump, Fox News reported Monday. His post had been set to expire this week.

Fox News reportedly obtained Atlas' resignation letter, dated 1 December. In the letter, Atlas praised measures taken and work done by the Trump administration during the COVID-19 pandemic, and wished "all the best" to the projected administration of Joe Biden.

"I am writing to resign from my position as Special Advisor to the President of the United States," Atlas said, thanking Trump for "the honor and privilege to serve on behalf of the American people".

Atlas wrote that he "worked hard with a singular focus" to "save lives and help Americans through this pandemic", suggesting that he "always relied on the latest science and evidence, without any political consideration or influence".

Atlas stated that the main focus of his advice was to minimize harm as a result of "both the pandemic and the structural policies themselves, especially to the working class and the poor."

“Indeed, I cannot think of a time where safeguarding science and the scientific debate is more urgent,” Atlas said.

The Trump advisor lauded his own work at the White House and his collaboration with "several selfless colleagues in designing specific policies to heighten protection of the vulnerable while safely reopening schools and society".

He noted that efforts had been made to increase personal protective equipment and "tens of millions of extra tests to nursing and assisted living facilities", as well as "more frequent monitoring updates using clinical guidelines to intensify testing".

"We also successfully designed rational guidelines for safely opening schools, a strategic use of the newly developed testing program, and a national stockpile of drugs for future crises", Atlas said.

In remarking on the lockdowns that he warned against, Atlas said the team "identified and illuminated early on the harms of prolonged lockdowns, including that they create massive physical health losses and psychological distress, destroy families and damage our children".

“And more and more, the relatively low risk to children of serious harms from the infection, the less frequent spread from children, the presence of immunologic protection beyond that shown by antibody testing, and the severe harms from closing schools and society are all being acknowledged,” Atlas claimed.

Atlas praised Operation Warp Speed, the Trump administration's initiative to accelerate the development, manufacturing and distribution of a COVID-19 vaccine, claiming that it "delivered on our promised timelines for new drugs and vaccines."

"I congratulate you for your vision, and also congratulate the many who did the employ work—we know who they are, even though their names are not those familiar to the public," he remarked in his letter.

© REUTERS / Carlos Barria
U.S. President Donald Trump delivers an update on the so-called Operation Warp Speed program, the joint Defense Department and HHS initiative that has struck deals with several drugmakers in an effort to help speed up the search for effective treatments for the ongoing coronavirus disease (COVID-19) pandemic, in an address from the Rose Garden at the White House in Washington, U.S., November 13, 2020. REUTERS/Carlos Barria

He concluded his letter by wishing all the best to the next US presidential administration.

"I sincerely wish the new team all the best as they guide the nation through these trying, polarized times," the Trump appointee wrote. "With the emerging treatments and vaccines, I remain highly optimistic that America will thrive once again and overcome the adversity of the pandemic and all that it has entailed".

During his tenure, Atlas reportedly sparred with other members of the White House Coronavirus Task Force. The director of the Centers for Disease Control and Prevention, Robert Redfield, criticized the Trump appointee, reporting that everything Atlas claimed about the pandemic was false. Atlas defended his statements, saying that all of his advice to the president was based on "current science".

He stated that, prior to his summer attachment to the Trump team, expertise at his level "has not been present" in the White House, claiming that his advice to the president was "perfectly consistent with the most appropriate strategy for dealing with this pandemic".

The White House reportedly stated earlier that deliveries of a coronavirus vaccine could begin as early as this week, available first for front-line workers, medical personnel and senior citizens.

WHO Advises Against Use of Gilead's Remdesivir as Coronavirus Treatment